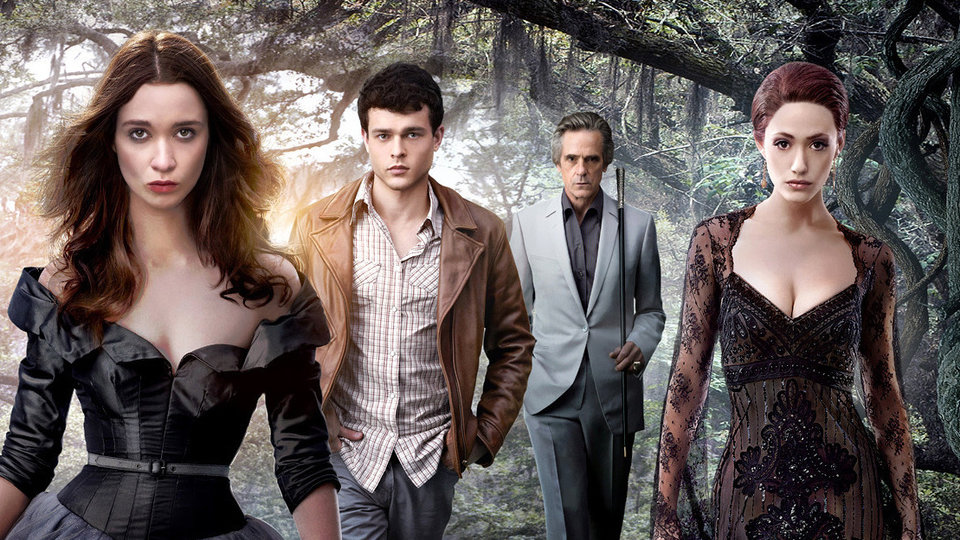 Ethan Wate (Alden Ehrenreich – Stoker) longs to escape the small US southern town of Gatlin that he lives in. One day a new girl arrives in his class, Lena (Alice Englert – Ginger & Rosa) who has no friends and is called a witch by her classmates. Ethan becomes friends with her and starts to fall in love, yet he soon discovers there is a horrible curse on Lena that will destroy their love, the town, their history and reunite long-lost family relatives for good and bad deeds.

Beautiful Creatures comes from the book of the same name by Kami Garcia, which is aimed at the much sort-after Young Adult marketplace (much like Twilight). Of course, this film wants to stand up on its own merits so they have tried to make it slightly lighter toned than other such genre films. But this is one of the stumbling blocks of the film; it’s far too straight laced to be in the Gothic mould.

At no point are any of the people in this film frightening or give a sense of menace. The “dark” side has some of the most woefully inept evil characters ever seen – just because they dress in black it doesn’t mean they are evil. All the “light” characters dress as if they have picked up a series of random clothes and just put them on, none of them actually seem to have any powers beyond throwing a bit of lightning or fire balls.

Bad acting is another nail in the coffin for this film. Both leads are incredibly wooden. Why the film makers insisted on using such a plain actress as Alice Englert in the lead role is beyond us, she lacks any emotion, passion or make-up to stand out in a crowd.

Ehrenreich is unable to give any humour to the role, and his romantic skills are painfully embarrassing. Instead he comes across as a bumbling idiot. Jeremy Irons plays it exactly the same style throughout, with no emotion or depth making it difficult to care for him, and whoever got Emma Thompson to sign up for this rubbish should be forced to watch the film for an entire 24 hours.

The screenplay is thin as there is zero storytelling to push the film along and plot holes galore. There is no chemistry between any of the actors, so we never really  cared to whatever happened to each of them The CGI has a distinct 90’s feel to it too that makes it all rather laughable.

Beautiful Creatures wants to aim at the teen-girl market and become the new Twilight, yet it shoots so far wide of the mark it’s rather dull and poor. There is nothing to really recommend here and Beautiful Creatures leaves us a little cold.

Advertisement. Scroll to continue reading.
In this article:Beautiful Creatures