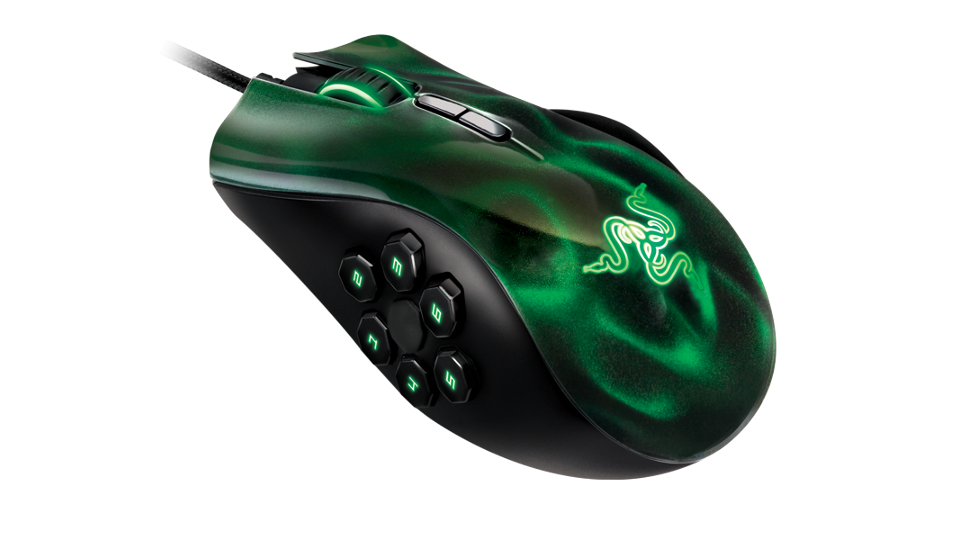 Following on from our Razer Taipan review we’ve also been spending some time with the Razer Naga Hex which is an expert gaming mouse designed for Multiplayer Online Battle Arena and Action-RPG games. We fell in love with the Razer Taipan with its ergonomic ambidextrous design and precision control. However some gamers specialise in certain types of games and in these cases a multi-purpose mouse isn’t always the best choice.

If you play MOBA games such as League of Legends and DOTA 2 or Action-RPG’s such as Diablo III, and Torchlight II then you know these require a lot of fast button presses. The Razer Naga Hex is designed with this in mind and features a circle of six-hexagonal buttons with a thumb rest in the middle. These buttons have two default settings which bind them to the 1-6 top row keys or the 1-6 numpad keys. Swapping between these modes is done via a switch on the bottom of the mouse.

The hex buttons take some getting used to and at first we found ourselves pressing them incorrectly while using the mouse. After some practice though you start to wonder how you did without them. Once your thumb has adjusted to the new movements they are incredibly easy to press and we were surprised just how quickly we could move between them. Razer claim the mouse can cope with up to 250 clicks per minute and having tried it out we believe them.

As nice as the hex buttons are to use we also found that we were suffering click fatigue after more than half an hours play on our first sessions with the mouse. Over a few days though this got easier and it’s definitely quicker than using the keyboard or clicking on-screen icons with the mouse pointer. To help the mouse comes with 2 different thumb rests that you can swap out if you find them more comfortable than the default.

The mouse is of average size and doesn’t feature an ambidextrous design. Instead it’s moulded to your right hand and features a rest on the right side for your non-button pressing fingers. The shape of the mouse didn’t suit us right away and again led to some tiredness after extended play. Being a little different to a standard mouse shape means you hold your hand in a position that you might not be used to. Again this gets easier the more you play.

The Razer Naga Hex again features the 7ft thing braided wire removing the need to worry about batteries running out. The wire is light and flexible meaning you won’t even know it’s there during play but be warned these do tend to fray a little over time if they touch the edge of your desk. The mouse is nice and light and slides easily over a decent mousing surface. It’s not as sensitive as the Taipan but still boasts an impressive 5600dpi laser sensor which is more than adequate for most players.

Like the Razer Taipan the mouse is a breeze to setup and just requires a USB port. By downloading the Razer Synapse 2.0 software you can also ensure you have the latest updates, configure the mouse and save your profiles to the cloud. The cloud feature is great if you play from a variety of machines as you can login and download all your settings via the web.

In testing the mouse we found it performed well in a variety of games but is definitely most useful in Action-RPG’s and MOBA games. It’s also a good choice if you play MMO’s and we were able to play World of Warcraft quite easily with the mouse and almost no use of the keyboard. However it’s also worth noting that if MMO’s are your preferred genre the standard Razer Naga has a 12-button grid on the side which is even more useful.

The Razer Naga Hex is another brilliant mouse from Razer and perfect for the types of games it is designed for. We still prefer the Razer Taipan but if you focus your gaming on MOBA or Action-RPG’s then we recommend you check this out. The Razer Naga Hex can be bought direct from Razer for £69.99.

Check out our recent interview with Min-Liang Tan, Razer CEO for more information about Razer and their products.