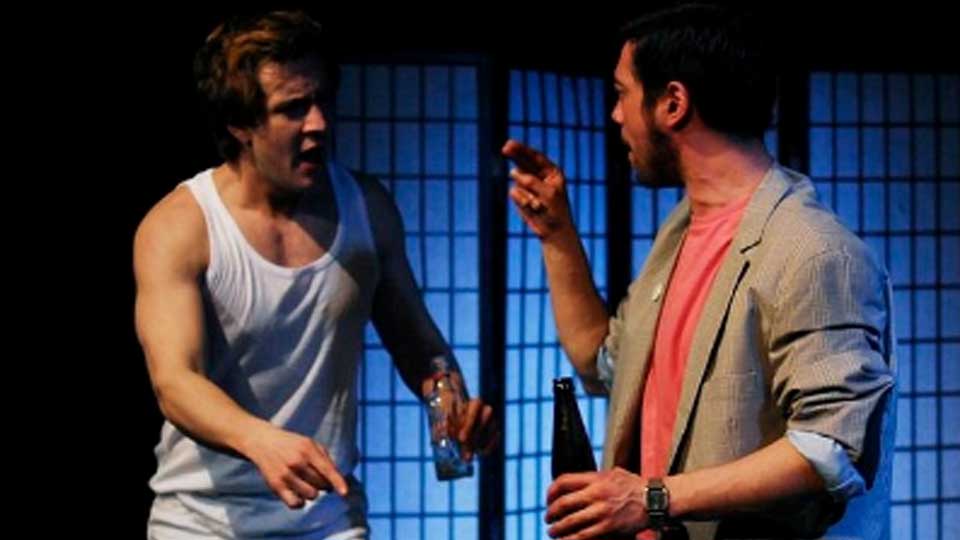 An acclaimed production of the Pulitzer Prize-nominated American play Boys’ Life, by Howard Korder, now finds itself nestled in the King’s Head Theatre, following a sold-out run at the Etcetera Theatre in Camden Town. We’ve been to the King’s Head a lot recently and we love the intimate setting of the theatre, which is the perfect for this unpretentious and thought provoking play.

Howard Korder is one of the world most poignant and interesting writers. His is an Emmy Award-winning writer and Executive Producer of the fantastic television show, Boardwalk Empire. His talent not only covers television, but also pans through to plays. He was nominated for the Pulitzer Prize when he penned Boys’ Life, about the “battle of the sexes”, transporting us back to the sexy, ‘in vogue’ days of New York circa 1988. At the time, the western economy and capitalism were riding high. His play Search and Destroy was also adapted into a film in 1995. Among the screenplays he has written are The Passion of Ayn Rand and Lakeview Terrace, we can safely say that we’re pretty big fans of his work and having seen this play this evening, we can safely say that we continue to be impressed by his writing skills and the ability to have that human connection.

Almost a quarter of a century later, Sebastien Blanc’s revival of Boys’ Life, specially commissioned by 11:11 Productions, affords us a look back in time, to relationships between the sexes, when the going was apparently good. The play is honest and extremely funny at times – more so because it is so painfully accurate to real life scenarios and the awkwardness that we can sometimes find ourselves in is brought to life on stage and when it happens to other people, watching the scenes are hilarious.  Boy’s Life tells the story of three former college pals, struggling to deal with the disillusionment and emptiness of modern life. Dating is never easy, is it? Having lived with male flatmates, we can safely say that they gossip as much as women and find the opposite sex just as confusing as us females do. This play highlights the low points, high points and all that can be fake with dating. Sculpture? Oh, I really love sculpture, it’s one of my favourite things – tell me more about it. We can fake a date and pretend to be on their wavelength in the hope that it will achieve common ground, but we can’t fake an entire relationship for a sustainable amount of time! How many times have you cringed being on the most unsuitable date? Or how you feel that certain friends are not suited whatsoever, yet they make their differences work into a full blown relationship, for fear of being alone and somehow manage to convince themselves that it is right? Only for friends who know the real you, know better! How, in a fast changing world of sexual politics, a group of twenty-something American young men, fresh from college get caught in a state of arrested development and struggle with the concept of the “new man”.

Where does the modern man find himself in this day and age? This play focuses on the male protagonist and really hardly anything at all has changed since the 1980’s, in terms of the struggles of being in your twenties and all the complications and hopeless dates and hope for the future that it involves. There are so many painfully accurate scenarios in this play, the attention to detail is superb. The entire cast put in convincing performances and each have fully formed and moulded into their characters, with everyone in the show acting to an incredible standard, but in the most natural way.

How refreshing to be able to do this in a play and for it to feel ‘real’. That is what we went away with this evening. There were some rip-roaringly outstanding moments, coupled with harsh doses of reality. Ever tried introducing your friends to a hopeless love match, in the chances that they get along, anyone? We loved the edgy undertones of the play and how it felt un-showbiz in that it was more like a concept of reality being brought to the masses attention, more of a live story or like looking back to your early twenties and knowing exactly what the characters were going through! This play takes them from those days right up to the point of marriage. We loved the simplicity of this play. Although we can imagine that it would also look great on screen, on stage it really works and it felt fresh to be watching such great writing being brought to the stage.

Anyone who has left college and lived in a house-share with your fair share of partying will be able to relate to this play! We thought that Boy’s Life was incredible to watch. We loved the way that the dont-mess-with-me straight talking New York characters were emphasised in a way that only they can, there was no apologising their way out of scenarios like us Brits normally do, so this was again an interesting take on events and which we thoroughly enjoyed. The music really added the feel of the play, with some well chosen 80’s songs thrown into the mix at the right moment.

Boy’s Life is fun, real, subtly hilarious in parts and utterly convincing. We recommend that you get yourselves down to the King’s Head theatre for an alternative play, which has a very cool, authentic and indie vibe about it. We enjoyed it immensely.