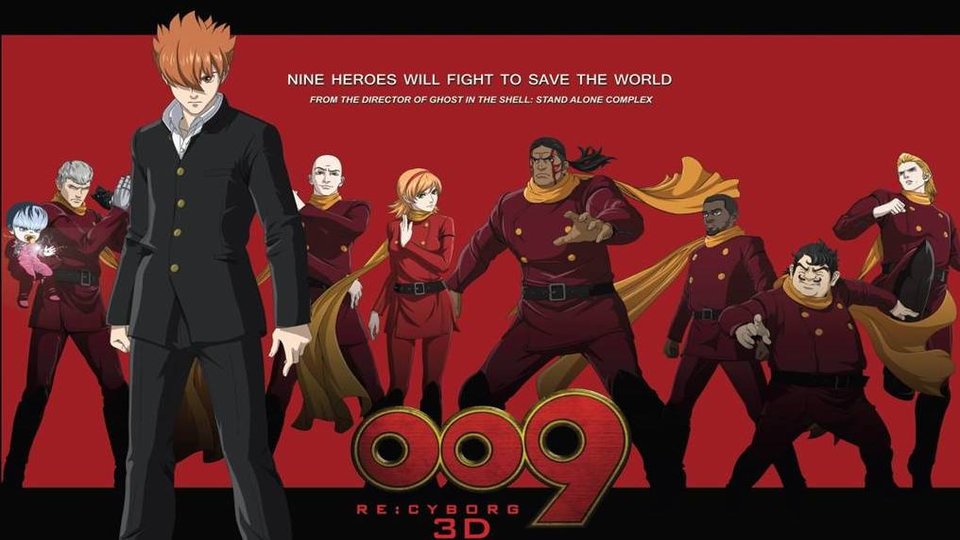 It is 2013 and the world is peaceful, but suddenly skyscrapers are falling and suicide bombers are wrecking havoc amongst cities. The terrorists are all speaking of “his voice” – that calls for humanity to start again. In the past there was a team of nine super cyborgs that guarded the earth. Out of action for years, these cyborgs are located all over the world either in hiding or working for the governments, so it’s left to their mentor Dr. Gilmore to gather his old team once more for one of their biggest missions ever. However it seems that the designated leader 009 may have already been brain-washed by “his voice”.

009 Re:Cyborg is the latest film version of the hugely popular Japanese Anime series. It was created by Shotaro Ishinomori back in 1964, ran intermittently until 1984 and was followed by occasional film versions. Ishinomori went on to create Mighty Morphin Power Rangers and established his credentials worldwide, with the Guinness Book of Records finally ruling him to be the most prolific solo comic author on the planet. So entering into this world without any prior knowledge of the series is a tricky ask, but we are pleased to report that the film works perfectly well as a stand alone film.

The film looks absolutely stunning; there are huge levels of bright colours that are contrasted against the bleak backdrop of the skyscrapers. To go from the bright blues and orange’s to the murky greys and yellows is an assault on the senses but we couldn’t help but be mesmerized by these wonderful opposites. But it’s not just the landscapes that keep you watching, it’s also the intricate details on the human’s that looks so life-like it’s unreal to think it’s just an anime film. Certainly the scenes in the rain are the best to witness as they look amazing and the way the water falls onto faces or into puddles looks more like film than animation.

009 Re:Cyborg’s slight problem is the storyline, and whilst it’s not a huge problem it still caused concern throughout its 103 minute run time. The main crux of the story is perfectly reasonable to follow and actually makes for very edgy viewing. But at times it felt like the script went too far into the matrix. It adds in many aspects that don’t work for the main storyline too – the religious angle throws a curve-ball in understanding what’s going on and it that just pulled the film down into an incomprehensible mess for a short period of time.

009 Re:Cyborg has some of the most sumptuous visuals of recent years with an equally exploratory storyline. Yet at times the storyline got too deep for its own good. It plays out like a mix between The Matrix and Street Fighter, and the end product will leave you in contemplation for many days afterwards.