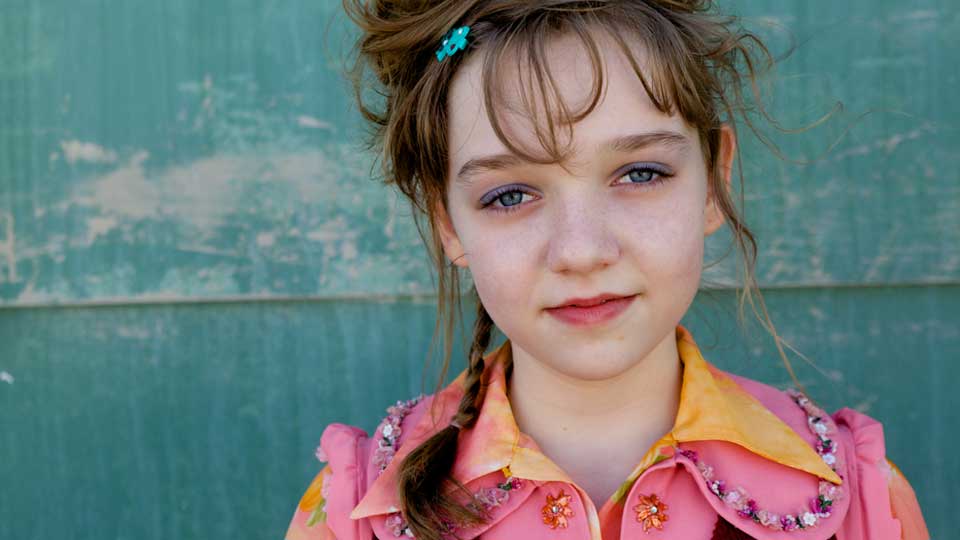 11-year old Elizabeth (Julia Sarah Stone) is eager to start puberty and anticipates the moment she gets her first period. As she looks forward to growing up, Elizabeth accidentally discovers that her parents aren’t her biological parents which throws her world into chaos. Determined to discover the truth, Elizabeth fixates on her love for Dolly Parton convinced that the country star could be her biological mother, and runs away from home.

The Year Dolly Parton Was My Mum is an unusual and quirky little film. Set in the mid 70s, the film tackles the subjects of adoption and identity. Elizabeth’s world is turned on its head when she discovers that she has been lied to for the past 11 years. Many films and TV shows have tackled this similar subject but none handle it quite so well as this movie. Whilst we think the way she finds out is clumsy (we’ll get on to that shortly), the aftermath is handled beautifully. Elizabeth is desperate to ask questions and find out the truth whilst her mother Marion (Macha Grenon) would rather pretend it never happened and avoids the subject.

The dynamic between Marion and Elizabeth is the heart of the film. Whilst Gil Bellow’s portrayal of father Phil is a little passive, through no fault of his we must say, Grenon’s Marion is desperate to keep her world exactly the way it is and hold on to Elizabeth at all costs. What she fails to see is that by telling her daughter the truth and helping her through the situation would likely strengthen, rather than destroy, their bond. Stone is the real standout as misfit Elizabeth. Ignored by her classmates because she hasn’t had her period, she can’t even find comfort in her parents who refuse to deal with the revelation that she isn’t their daughter. Instead she thinks in a childlike way and runs away to discover the truth. Stone’s performance is impressive and she fleshes out all the nuances of a child that is confused, emotional and lost.

Our only real gripe is the way that Elizabeth finds out that she is adopted. It stretches believability that her father would give her information that would lead to her finding out in such a cruel way. Elizabeth discovers that she’s adopted when her father tells her the family’s different blood groups. Surely he would know that if she’s studying that subject at school the truth could come out? To leave her shocked and upset in a class full of other kids is very cruel.

The film is of course sound-tracked by Dolly Parton songs, most of which Parton sings and some she wrote for other performers. Dolly provides a guiding light in an otherwise dark tunnel for Elizabeth and her music brings a warm sense of familiarity to the movie. To be honest we’d probably love Dolly to be our mum too if we found out we were adopted.

The Year Dolly Parton Was My Mum is a sweet coming-of-age movie that is full of strong performances and an engaging storyline. The film would like appeal to a family audience and its exploration of the mother/daughter bond definitely skews it to the female audience. Having said that there’s much to enjoy here and director/writer Tara Johns impresses with her feature film debut.