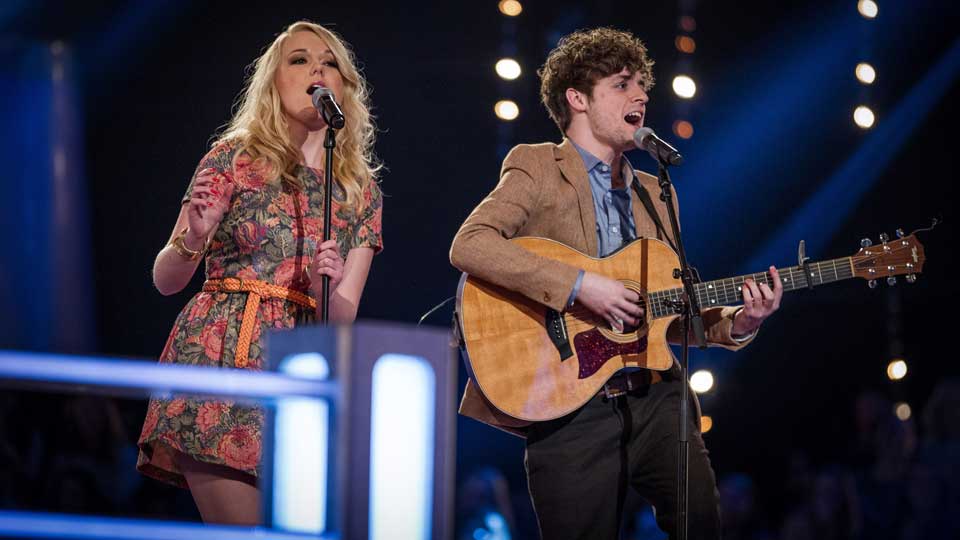 Welcome back! We missed you last week Reggie! Tonight is the final battle show, by the end of the mammoth episode our superstar coaches will be one step closer to deciding their final line-ups. Tonight we will see twenty four acts singing their hearts out in the hope that they can get through to next week’s knockout rounds. As you may recall, only Danny and Will have their ‘steal’s’ left as Tom and Jessie have already ‘stolen’ an unsuccessful act.

Ricardo and Mitchell are opening the show. Ricardo is a stage veteran and lovely locked Mitchell is just 19 but impressed with his rock prowess in the blind auditions. Their performance of ‘Are You Gonna Be My Girl’ is full of rock swagger and the coaches say they loved the energy but Jessie and Will disagree over who they prefer. Danny crowns Mitchell the rock god of this battle and puts him through to the next round.

It’s our country showdown now. Yee-haw! Sir Tom gives Emma Jade and Mike ‘Landslide’ by Fleetwood Mac to perform. In rehearsals Tom thinks that love may be blossoming but they need to put that aside and aim to win. The performance is sweet and Danny comments on the chemistry between them too. Will says Emma Jade sounds ‘sweet like a bucket of sugar.’ We think Tom should just team them up as a duo but instead he puts through Mike. Will Mr i.am be a man of his word and ‘steal’ Emma. Ermm nope but she does get a lovely group hug from the coaches to a Dolly Parton soundtrack, which we think she would enjoy.

On to team Jessie who has pitted Thriller West End performer Alex against lovely rookie Letitia. Alex rocks a weird hat in rehearsal and puts off Letitia with his dance moves. They are performing ‘Family Affair’ by Mary J Blige and it sounds a bit iffy to us. Will says Alex’s pitch suffered from the pant splitting dancing. Jessie says Alex did too much and Letitia didn’t do enough but she opts to put through Letitia. We hate to say it, but we are shocked that both Will and Danny go for the steal! Alex opts to join team Danny.

On to the interesting combo of Joseph and Diva. In rehearsals Joseph doesn’t really know the song and accidentley calls Diva old – we love him.  They sing their hearts out to ‘Don’t Let the Sun Go Down on Me’ and it’s one of our favourite battles so far but there can only be one winner – lovely Joseph.

Danny has partnered up Abi and Laura (to be honest we don’t really remember either of them). The ladies will be singing ‘Heaven’ by Emeli Sande. Jessie thinks Laura gave a more confident performance but Tom is intrigued by Abi’s Raaga influences and Danny agrees and puts her through to the next round.

Now we have team Will, he has paired Liam and John. Liam was a big fave in the blind auditions but we have a lot of love for John’s Hawaiian shirt collection. Reggie bills it as ‘the fight of the falsettos’.  John works the stage like a pro and they both look sharp in their suits.   Will has given them a bit of a cheesy song in ‘Easy Lover’ and Jessie thinks it’s a bad choice. Will puts through John and Jessie is devastated that she and the other coaches can’t steal Liam.  We are sad to loose curly haired Liam too but manage not to cry, unlike Liam and Jessie – who has to ‘take a moment’ away from Will!

After a quick comfort break for the coaches, we have Lem (big haired Jessie fan) and Trevor (high pitched backing singer) battling on ‘Soul Man.’ They take a ‘soul pledge’ in rehearsals and both acts are really good – we don’t envy Jessie on this one. They get the crowd dancing in the aisles and the coaches on their feet for a standing ovation. Jessie commends them both but picks Trevor. Lem works hard to tempt Will to steal… and its works!! Lem is now on Team I.Am. Jessie is very smug when she realises all 3 of the other coaches stole members of her team; Will ponders whether this means Jessie has the best singers or whether she has put through the wrong people.

Back to team Tom for slow coach picker Alys and Adele tribute act Lareena. Alys seems to be in control in rehearsals and gets her mic turned up for their rendition of ‘Rambling Man.’ We think Alys won this battle with her welsh lilt but Will says Lareena was flawless. Tom finds it a hard decision to make because they both ‘did the song justice’ but he selects Alys.

Team Danny again; its former indie star Paul versus internet sensation Sean. They perform ‘I’m a Man’ by the Spencer Davis Group. Gravelly voiced Paul seriously works his mic stand on stage; we are a touch worried he might take Sean out with it! Danny compares it to Gladiators and Will commends Paul for his ‘authentic growl’. Tom tells us that he knew the Spencer Davies Group in the sixties – of course he did! Danny crowns Sean the winner and like us, Will is a bit glum about this.

We have Emily and Moni now duelling for a place on team Will. We would expect Moni to win this one easy even though Emily knows the song better and is far better suited to it. BTW Of Monsters and Men’s ‘Little Talks’ is a great song choice Will! Emily sounds great and Moni struggles a little with the song despite his amazing voice. Jessie says Will shouldn’t have matched these two together because they both deserve to go through. Will opts for Moni because he wants to help him control his voice.

On to Ragsy and Colin. Tom gives them the Muse number Starlight to work with and they perform it with gusto. We think Colin gives it more welly and would like to see him go through! Tom dashes our dreams and puts through Ragsy.

The final battle of the night comes from Nadeem and Karl. These two have got a bit of a bromance going and they plan to work as a team to make the song ‘Red’ as good as it can be. They definitely saved the best battle for last – Danny has two amazing singers on his hands here. Jessie says that if that song was released now people would buy it. Danny says they are both an inspiration and that ‘he is an idiot’ for putting them together. Danny decides Karl is the winner of the battle and that’s it for the marathon ‘super battle Saturday’. The knockout teams are in place. Next week we will see which 3 artists from each team will go through to the live shows.