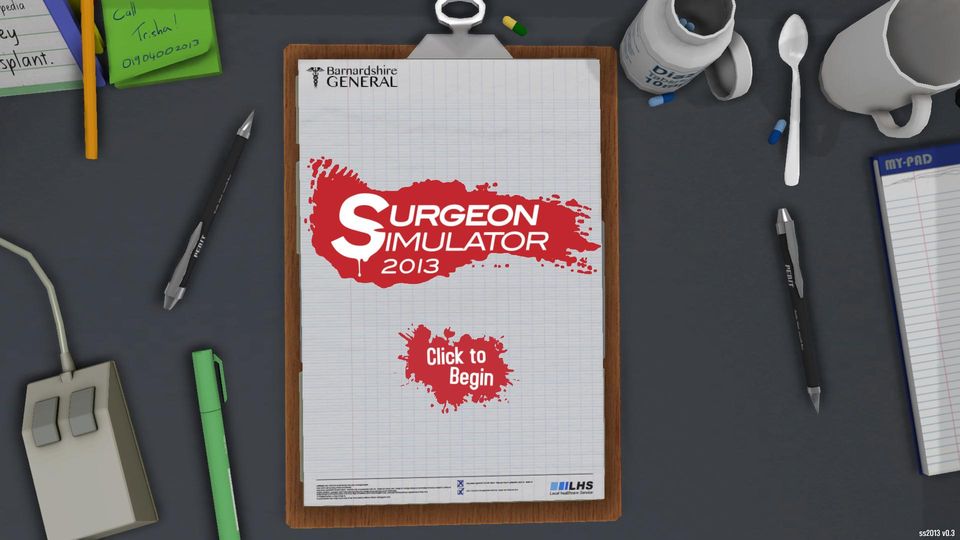 At the 2013 Global Game Jam back in January a team of four game developers, from London-based Bossa Studios, took part. In just 48 hours they turned out an impressive and hilarious game called Surgeon Simulator 2013. The game attracted a huge amount of attention and went viral.

Due to the large attention the developers put it onto Steam Greenlight where it became the fastest ever game to be green-lit. Since then the game has received more development time and polish and is now available to purchase on Steam as a full release. If you’ve never played the original Game Jam game you can still check it out online.

It’s probably worth pointing out at this point that Surgeon Simulator 2013 isn’t a serious take on the life of a surgeon. To really appreciate the game you need a dark sense of humour and it helps if you’re not too squeamish. You play as surgeon Nigel Burke and must work your way through three surgical procedures – a heart transplant, a double kidney transplant and also a brain transplant.

No medical knowledge is needed to play the game, in fact it probably helps to have none. The action is viewed from first person where you see one of Nigel’s arms. The arm can be controlled with a combination of the mouse and keyboard. Moving the mouse moves his arm around, left button lowers it and holding the right button rotates his wrist to move his hand.

In order to interact with anything you need to manipulate Nigel’s fingers. These are mapped to the AWER keys and the space bar acts as his thumb. This gives you a decent amount of control over how he moves his hand and allows you to grab, move and pick objects up.

Nigel starts the game at his desk which is full of all manner of things to interact with. There’s a computer with a controls floppy disc inserted, a telephone that keeps ringing, pens and paper and a variety of other things. After operations Nigel returns to his desk and you’ll keep finding new things like floppy discs that you can load up for extra tips. When you’re ready to start an operation you can look at your todo list to select one.

You start the operation by removing a sheet which reveals a patient already opened up and prepped for heart surgery. To the sides of the patient are all manner of standard medical tools such as scalpels, syringes, saws and a transplant case with the new organ. There’s also plenty of other tools such as a hammer and drill as well as pens, pencils and even a plastic spoon.

With no real instructions or direction there’s a fair amount of trial and error before you get an operation right. It can be a little frustrating while you work out what you’re doing but it’s a lot of fun. To crack the rib cage you might decide to use the small circular saw and take your time cutting each rib. However we dropped it on the floor on our first attempt and found that just smashing the ribs to bits with a hammer worked equally as well.

As you operate on a patient the game keeps an eye on their vitals and the important one is how much blood they have and how quickly they are losing it. Lose too much, the patient will die and it’s time to start again. As mentioned this isn’t a serious sim, so pretty much anything goes as long as you keep the patient alive. The heart is covered by other internal organs which you can carefully cut out, drill out, hack to bits and even tear out with your hand.

The complexity of the controls is done on purpose to ensure you don’t always manage to do what you intend. It’s quite possible to reach for a tool only to knock half of what you need on the floor, stab yourself with a syringe full of meds or just murder your patient completely by accident.

After a few goes you should get through each operation which then unlocks the ambulance mode. Here you get to tackle the same operations again but this time in the back of a moving ambulance. As it speeds its way to the hospital you and everything in it will be constantly jerked and thrown about making things even tougher. While performing a brain transplant the ambulance jumped, the back doors flew open and we lost our new brain out the back doors onto the road.

It’s a short game but the combination of crazy operations, physics and tricky controls ensure that no two attempts will be the same. Our only real complaint is that things get a little repetitive after a while and it would have been nice to see a few more operations or some randomness to those on offer. However for just £6.99 Surgeon Simulator 2013 is a fun and unique experience that is well worth a few hours of your time.