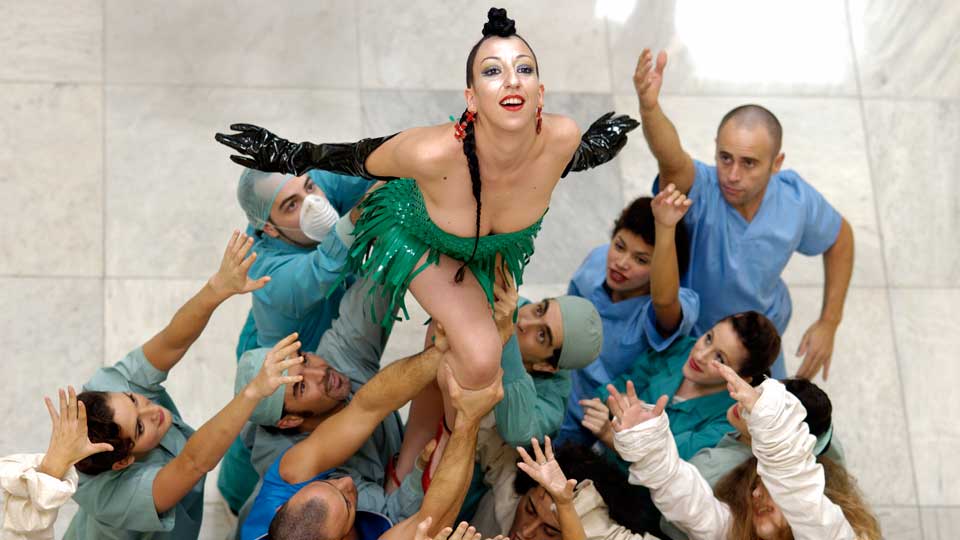 For the latest instalment of Celluloid Closet we’re moving away from the more traditional entries into gay cinema. Most of the films we’ve highlighted to date have been the standard boy meets boy, boy falls in love with boy, boy loses boy, boy gets back with boy kind of formula. Well 2005’s 20 Centimetres ignores that narrative and does something incredibly unique and daringly creative.

20 Centimetres tells the story of narcoleptic pre-op transsexual Marieta (Monica Cervera) who dreams of becoming a real woman and fantasises about elaborate song and dance numbers with her name in lights. You can already tell from the brief plot summary that this isn’t going to be your typical instalment of Celluloid Closet.

Written and directed by Ramon Salazar, 20 Centimetres drew comparisons to the great Pedro Almodovar and it’s not hard to see why. The story is a little off-the-wall and the colourful characters are the kinds you would find in Almodovar’s world. There’s also a darker side to the story that juxtaposes with the light and cheery feel of the musical numbers.

Monica Cervera is simply wonderful as Marieta. As an actress Cervera has been on our radar for a number of years but in this movie she gives the performance of her career. As Marieta she’s utterly fearless throwing herself into the role and enjoying every minute of the song and dance numbers. Quite easily Marieta could have been a tragic character but Cervera brings so much life and energy to the role that you can’t help but smile.

Marieta has her fair share of tough moments throughout the movie. She resorts to prostitution to fund her operation, her narcolepsy means she passes out in the most random of places and the object of her affection Raul (Pablo Puyol) surprises her in a way she never expected. Marieta’s burgeoning relationship with Raul is one of the more emotive strands of the story and she spends the first half of the film not wanting to get close to him so he doesn’t discover that she has a penis. Once that revelation is out the film surprises with the way the story unfolds.

Part of the reason that 20 Centimetres is such a classic is because of the music used within the film. From Madonna to Dusty Springfield there are plenty of familiar tunes in here. Cervera may not be the best singer in the world but it really doesn’t matter. It all fits with the style of the film and endears you with its downright bonkers story.

20 Centimetres is a film quite unlike any other. The bright colours, stylish direction and strong performances make the film a real winner. Spanish cinema has always been bolder and more daring, and 20 Centimetres is an example of it at its finest. If you like your drama unconventional, bonkers and a little shocking in places then you’ll love this movie.