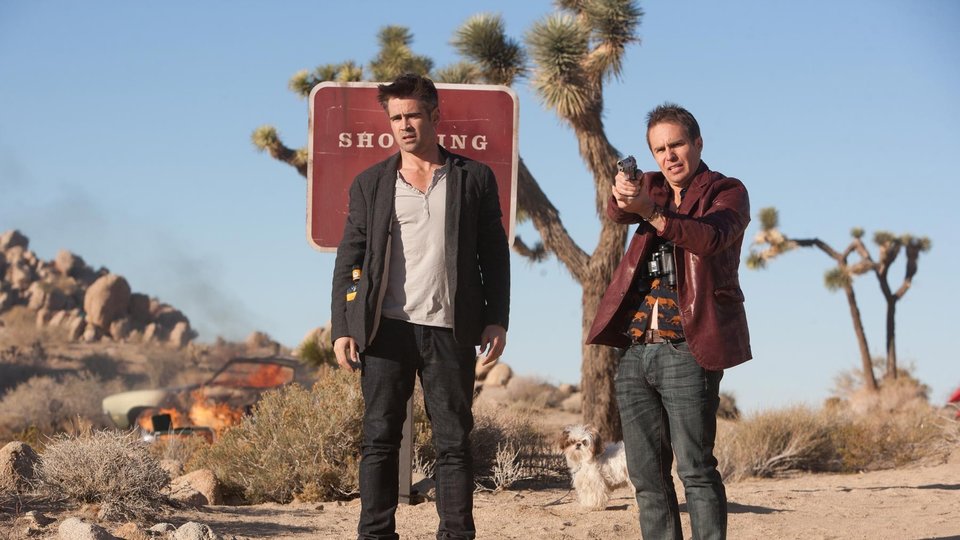 Marty (Colin Farrell – Miami Vice) is a struggling writer looking for inspiration for his next novel. His slightly off-kilt friend Billy (Sam Rockwell – Moon) has ideas he’s always trying to bounce off him but it’s Billy’s extracurricular activities that end up giving Marty a crash course in story ideas whilst embroiling him in the LA underworld. Billy and his business partner Hans (Christopher Walken – Batman Returns) have a lucrative scam running where they steal beloved pet dogs and return them for a finder’s fee. However this time around, they have stolen the wrong guys dog – crime kingpin Charlie (Woody Harrelson – Kingpin).

Seven Psychopaths is a blackly-comic tale of deception, theft and violence in LA. Written and directed by Martin McDonagh, who found international fame with the hilarious In Bruges, Seven Psychopaths tries to emulate that success but this time with a distinctly American vibe. It’s been 4 years since McDonagh worked on In Bruges so can he rekindle that electricity that made his film a cult classic back in 2008?

Colin Farrell continues to go from strength to strength. Having just come off the severely underrated reboot of Total Recall, Farrell once again charms your socks off with a cultured and highly entertaining portrayal of Marty, our hapless hero.

He is given stellar support in the form of Sam Rockwell and Woody Harrelson – both men relishing the opportunity to play it crazy. Linda Bright Clay gives a small but pivotal role big significance whilst Abbie Cornish and Olga Kurylenko dutifully oblige in the eye-candy department, however they don’t have big enough roles to make a true impression.

The films biggest star though is Christopher Walken. He is sensational in Seven Psychopaths with his delicate but powerful portrayal of Hans. This character, with his oddly classical dress sense and quirkiness could very easily be played OTT in the hands of a lesser actor. Thankfully Walken has the acting chops to make this one of his many career highs. His delivery is faultless, his demeanour always captivating and his natural on-screen charisma unparalleled. When you think about the talent amassed around him, that’s even more impressive.

It’s perhaps the dialogue that most wins you over in Seven Psychopaths. Sharp, quick and always on the money, the films’ script is its biggest asset (how many modern films can lay claim to that?). Mix in some great action and a violent but never overly-gratuitous level of 18-rated mayhem and you have an adult comedy that’s hard not to side with.

Seven Psychopaths has a lot going for it. With a cast this good it was always going to be a fun ride to take. It may not reach the same highs as In Bruges but it certainly guarantees a deliciously dark slice of comedy for the holiday season and proves that if you have a good script as your basis, everything else will eventually fall into place.

Jason Palmerhttp://www.entertainment-focus.com
Jason is a film contributor for Entertainment Focus (EF) bringing you the latest news and reviews from the movie world.
Previous article
Pitch Perfect Blu-ray review
Next article
The Place Beyond The Pines – best movie openings