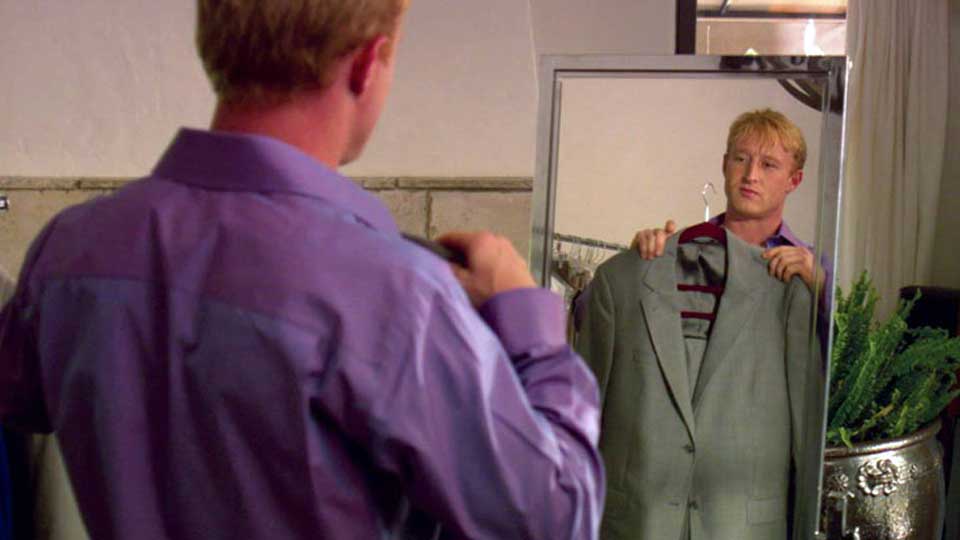 Bob (Hunter Bodine) proposes to his girlfriend Jenny (Hayley DuMond) just as his sister Stephanie (Shay Astar) announces that she is transitioning from female to male now going by the name of Steve. The two sets of news are greeted differently by parents Polly (Suzi Bodine) and Buster (John Bennett Perry). What Bob and Steve don’t know is that their parents are hiding their own secrets which threatens to come out as the family drama quickly escalates.

Bob’s New Suit is the feature film debut of former studio exec and film critic Alan Howard. He has written and directed the feature which is no mean feat for a debut feature. Unfortunately his vision doesn’t quite translate in this unbalanced and sometimes disconnected family drama. Despite being called Bob’s New Suit, the film has relatively little to do with a suit of any nature. Sure there’s one that talks to the audience (yes we’re not making this up) at intervals throughout the film but it never actually amounts to much of anything.

That feeling runs throughout the entire film. There may be lots of interwoven family dramas taking place but none of them really culminate in anything particularly engaging. Perhaps the most interesting strand of the movie is the storyline of Stephanie aka Steve and his girlfriend Marlena (Jenny Shimizu). Howard captures the reaction of Stephanie’s parents well but the storyline itself ends up going nowhere. The problem is that it’s fighting for attention against the other storylines in the movie, and even though it’s the most interesting it gets eclipsed by the more ridiculous revelations that happen later in the movie.

Performance wise everyone does an adequate job. Shay Astar is the standout as Stephanie and is head-and-shoulders above the rest of the cast. Everyone else’s performances are pleasant enough if not a little too pedestrian. We still can’t see Jenny Shimizu in anything without remembering her association with fame hungry Rebecca Loos so it’s hard to take her inclusion here very seriously.

Bob’s New Suit is a film that is average at best. There’s a good story there somewhere but the execution is lacking and the payoff isn’t worth it. The main problem with the film is that it starts grounded in reality but ends so far from real life that you can’t take it seriously. File this one under ‘serious mis-fires’ in your collection.