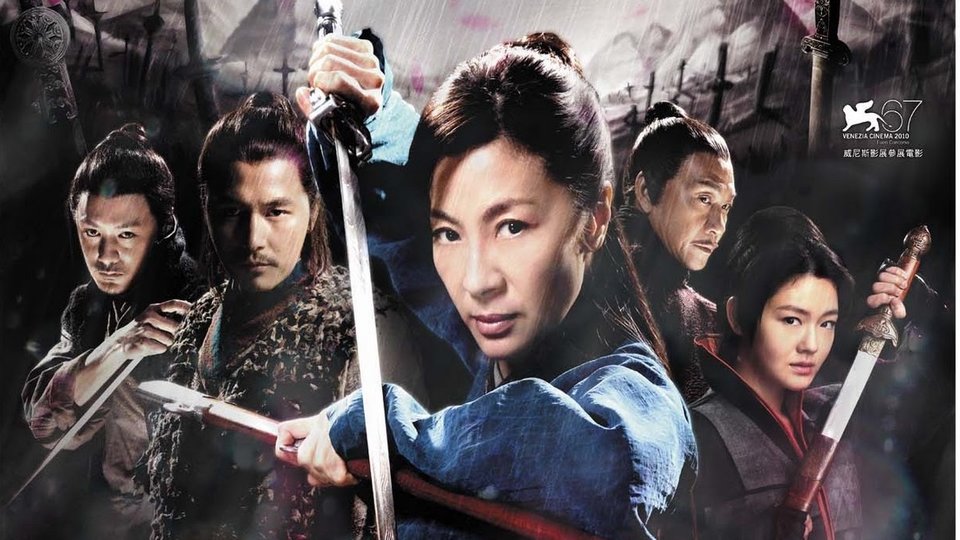 In order to escape The Dark Stone assassin gang who are after a mysterious Buddhist monk’s remains, Drizzle (Michelle Yeoh – Crouching Tiger, Hidden Dragon) undergoes an operation to change her appearance and her name to Zeng Jing. Now living in the capital and in possession of the bones of the monk, she falls in love with messenger Jiang A-Sheng (Woo-Sung Jung – The Good, The Bad and The Weird). However, their love is short lived when Zeng’s identity is uncovered and The Dark Stone assassins come after her and the mystical Buddhist remains.

Reign Of Assassins is co-directed by legendary HK 7 Hollywood director John Woo, so hopes were very high for this film especially as he was back doing martial arts films. Also there is no denying that seeing Michelle Yeoh in a martial arts film is very exciting – if there is one person who knows this genre well enough then it’s her. Sadly she is the best thing in this, as the main lead she has to hold the film together which she does amicably but never truly fulfils the criteria given in the film. Yet this is more to do with the overly boring action scenes. This is surprising to say, as John Woo has given us some of the greatest action/martial arts scenes ever, but these sword fights all seem rather laboured and dull.

The choreography isn’t the best either, it all seems to be standing still for a while until towards the end when it decides to change into a dance movement normally seen on stage at a pop concert. There are scenes of Wixua included here, yet these also seem vastly out of place and look to have been thrown in just to keep the action scenes more interesting. Unfortunately they never work and actually look rather laughable; the bending swords reminded us of the singing sword from Who Framed Roger Rabbit.

The best part of Reign Of Assassins is the love story better Zeng and Jiang. It has some genuinely touching moments and did get us involved in the pursuit of love between them. The storyline is helped along by Jiang’s “Auntie” who is constantly trying to force them together before time, it is rather funny to see and she has some of the best comedic lines in the film. But it is more about the love story than anything else, and we would have liked to have seen it play more on this side of the story.

Reign Of Assassins should be another excellent addition to the martial arts/wixua genre of films, especially with John Woo attached as co-director, yet it just never really clicks fully and instead misses out on most of the essential ingredients that should have been included to make it a winner. The love story aspect is the one appealing area of the film that actually works; it’s a shame that the action scenes are the let down.