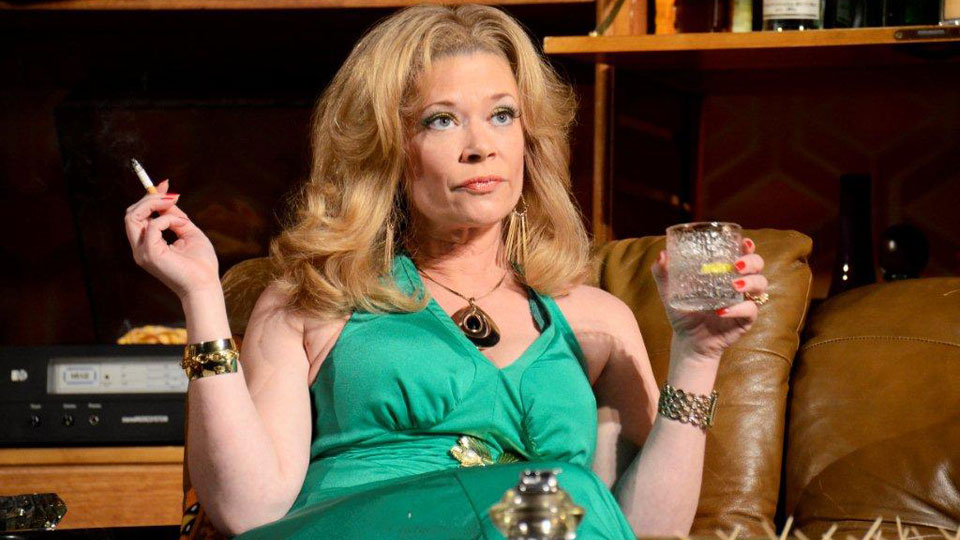 The action takes place in the house of married couple Beverly and Laurence. Their divorced neighbour Susan’s teenage daughter (the off-stage Abigail) is having a party, so Beverly invites Susan, and new-to-the-area couple Tony and Angela, over for an evening of drinks and conversation. What evolves from that simple premise is the most acutely awful and embarrassing social gathering ever conceived, as Mike Leigh rips into the shallowness and pretentions middle class suburban living, gouging out the eyes of taste, tact and diplomacy along the way.

Contemporary comparisons were made to other comedies that centred on the stifling entrapment of suburbia, such as The Fall and Rise of Reginald Perrin, but the startlingly original aspect of Abigail’s Party is that Mike Leigh gives his audience permission to laugh at his characters, and by proxy at humanity itself, rather than sympathising with them and their plights (and they are by and large a ghastly bunch). It’s not an especially comfortable concept to hold people up to ridicule; but with its broad characterisations, it’s likely that everyone knows somebody just like Beverly, or has been at a similarly excruciating get-together – and that’s why it’s impossible to resist its charms. Abigail’s Party made way for the comedy of embarrassment found most acutely in the works of Ricky Gervais, and stands as a natural precursor to The Office.

The casting of this production is spot-on. Hannah Waterman is a revelation as Beverly. Her stock phrases and condescending manner have been honed to perfection, but there are residual traces of vulnerability and self-doubt in there too, humanising the monster so that she never makes Beverly too preposterous to be believable (a temptation Alison Steadman, who originated the character, could never quite resist). Emily Raymond also shines as Susan, the one who isn’t quite as hideous as the others, and we have some sympathy for her as she’s force-fed gin by Beverly and coerced into agreeing with every point she makes because she’s too polite to say no (or rather, Beverly won’t accept no for an answer). Raymond is a delight to watch at playing bemused and uncomfortable, as she desperately tries to make the best of a bad situation.

Some excellent eye-acting and drunk-acting from Samuel James keeps us interested in the largely monosyllabic Tony, and Martin Marquez neatly fills the suit of the emasculated and tragic Laurence, clinging on to pretensions and aspirations in the absence of personality. Katie Lightfoot’s Angela is played as a fledgling Beverly but with a healthy dose of innocence, though she’s occasionally too mouse-like to be audible.

The direction is slick, keeping the action pacy, but with some commendable lulls in the momentum to add awkward silences; and well-observed changing dynamics whenever a new character arrives. The cranking up of the drama in the second act as events spiral out of control is achieved brilliantly, and the living room set becomes almost unbearably claustrophobic at times. For Abigail’s Party to be successful, it requires finely-tuned comic timing, and this production succeeds with plenty of good belly laughs throughout from a cast that work together impeccably.

This beautifully detailed and nuanced revival of Abigail’s Party reminds us that the play holds up as an ingenious piece of comic writing which is already regarded as a modern classic. You’ll squirm with mortification throughout, but there’s something enormously cathartic about that.