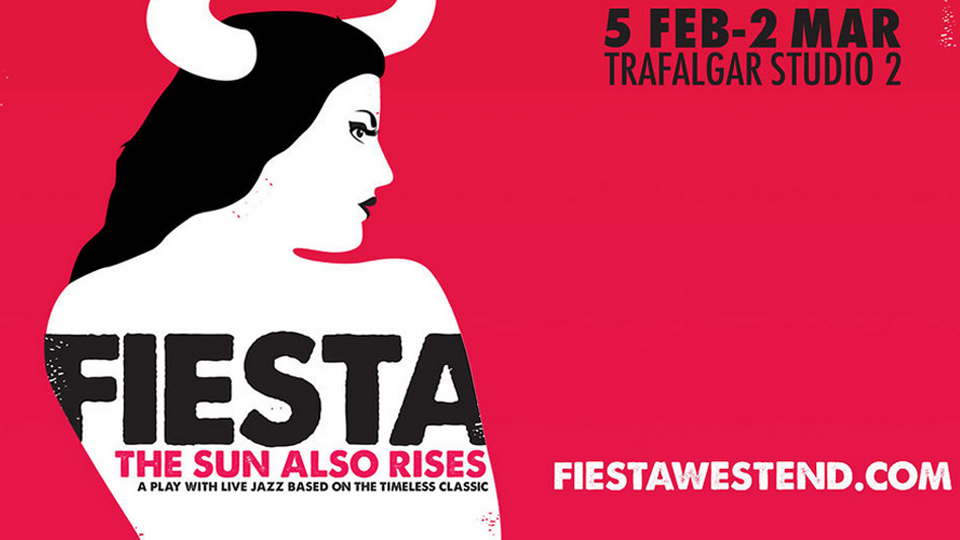 Ernest Hemingway’s sultry 1926 novel Fiesta (sometimes titled The Sun Also Rises) is brought vividly to life inside the fantastic Trafalgar Studios 2. It concerns a passionate love affair between American expatriate journalist Jake Barnes (Gideon Turner) and a titled English divorcee Lady Brett Ashley (Josie Taylor). From their reunion in the sophisticated cafes of Paris they venture to the earthier climes of provincial Spain, where Hemingway’s obsession with bullfighting takes centre stage. They’re dogged along the way by Jake’s American friend Robert Cohn (Jye Frasca), who fails to pick up on the blistering sensuality between Jake and Brett.

Alex Helfrecht’s production (she has adapted Hemingway’s novel and also directs) succeeds in capturing the spirit of the hedonistic 1920s found in the story. Her direction is slick and often inventive, making full use of the small space, though there are the occasional oddly clumsy dance routines that prove a little unforgiving at such close proximity to the audience.

Fiesta can be as intoxicating as the chandelier of wine glasses that dangles above the stage. At times the show is like a Bacchanalian festival, with copious amounts of liquor consumed and the characters drenching themselves in the dark red produce of the vine. This is the concession between Paris and Spain: whereas in the former the actors drink in a cleverly stylised way, the intoxication is literal and aesthetic in Spain.

There are several weaknesses to the production that combine to work against it. There’s little sense of setting in the Parisian scenes, since the rusty corrugated metal backdrop and dusky orange lighting isn’t suggestive of the built-up French Metropolis. Fiesta also takes a long time to get into its stride. Whilst it’s a slow-burner, and there’s an emotional pay-off with the raw climax, there are a few extraneous moments that could have worked just as well as backstory.

There are two central problems. One is that the truncated text doesn’t incorporate anything of Jake’s fall from grace amongst the Spaniards whose culture he’s infiltrated, and this lessens the power of the original story. Whilst the young bullfighter Pedro Romero (Jack Holden) is characterised, his function is really to act as a potential rival to Jake for Brett’s affections, and thus the story as presented could be set anywhere. The other is that the characters, to varying degrees, are unsympathetic; and after two hours it’s hard to care about them. Gideon Turner’s Jake makes up for his character’s heavy-drinking and dark secret with a great deal of charm and charisma; but Josie Taylor’s Brett fares less well. It’s an immaculate performance of a selfish and deceitful posh girl, but it’s hard to resist hoping the mismatched couple don’t find a happy ending, unless it’s as a punishment to one another. The nastiness of the characters is most acute when they combine to humiliate Robert Cohn (Jye Frasca), holding him up for ridicule with a heavy dose of anti-Semitism. To laugh (which appears to be the dramatic intention) would be to sympathise with Jake and Brett.

In the production’s favour is the intermittent accompaniment of jazz band Trio Farouche. A touch of saxophone, percussion and double bass create a wonderful soundscape, and to some degree they help with establishing a sense of location that’s not apparent in the staging.

Besides the well-chosen musical accompaniment, there are several other elements in Fiesta’s favour, most especially the performances. There’s an enjoyable sensuality between Gideon Turner and Josie Taylor’s characters, and the actors don’t put a foot wrong in treading the line through their emotional journeys. Jye Frasca is excellent support, providing an entirely different dynamic to the staging. We don’t meet matador Pedro Romero until late in the play, but Jack Holden still manages to create a delightful character, imbuing his bullfighter with an appealing innocence and joy for life that is almost entirely absent in the bitter and cynical leads.

Ultimately, Fiesta is a mixed bag, and its success or otherwise will hinge upon how deeply you’re sucked into the story and the world of the characters.

Josie Taylor and Gideon Turner as Brett and Jake. Photo by Bronwen Sharp.