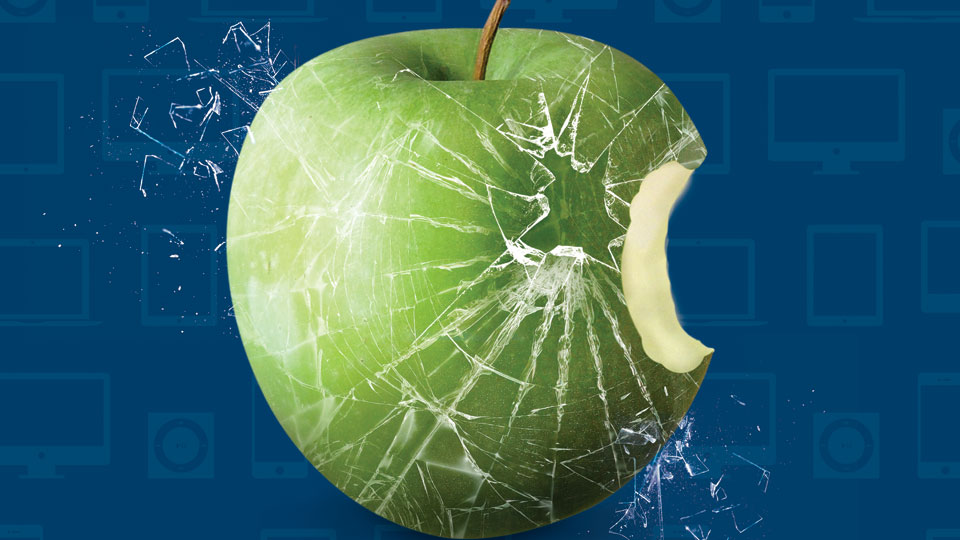 If you think you couldn’t live without your iPhone, Apple products and all the latest upgrades, then The Agony and the Ecstasy of Steve Jobs, a one-man show currently airing at the Waterloo East Theatre, may give you pause for thought. With plenty of laughs along the way, this insightful exposé of the conditions under which your gadgets are made, and the psychology of buying into the brand is an intelligently made and often uncomfortable argument against the most successful corporation in the world.

This is Apple as religion, with its devoted followers blindly following the brand. Like Richard Dawkins’ unrelenting sledgehammer of reason and impeccable logic against the great sky juju, writer Mike Daisey’s show strips Apple and their lord and saviour Steve Jobs of their mythic status and, with wit and politeness, takes you by the hand up to the attic to see their frightful and withering portraits.

A table, a chair, and a storyteller: the staging is simplicity itself. Edward Fromson pitches his performance to perfection. He’s instantly warm and engaging, humorous yet self-effacing, and perhaps most importantly of all, he’s very easy-going company. That’s important, because there’s only his voice telling you the story of The Agony and the Ecstasy of Steve Jobs, and he has the not inconsiderable task of holding your attention for eighty minutes without interval. Establishing his character as the ultimate geek, Fromson guides you through his personal relationship with Apple, from his first childhood computer (which had its own room and desk!) through to an obsessive young adult who needs every new product and upgrade.

The technologically illiterate may find some aspects of the narrative over their heads (though the reverence and near-orgasmic excitement with which Fromson recounts his journey with Apple is amusing whether or not you speak the lingo), and, save for the most reclusive centenarians there are very few people in the Western world who haven’t noticed the consumer revolution that Apple have spearheaded; and following his high-profile illness and death, most people too accept that Steve Jobs was both genius and arsehole.

What may be new, and what will almost certainly stick in the minds of the show’s audiences, is Daisey’s tale of his undercover visit to China, where its guarded factories on impossible dystopian scales in which working conditions are cruelly indifferent reveals a world we try to ignore. As he astutely observes, it’s a reality unrelated to anything we have seen in the UK for over a century. It’s hard to decide whether the impressions of Chinese people are designed to lighten the mood or add to the discomfort of the story.

Put it this way: knowing its origins, you’ll never look at your iPhone in the same way again. The inference is very clear that both sides, the consumer and the Chinese labourer, are slaves to Apple.

As Daisey comments, the artificial construct of The Agony and the Ecstasy of Steve Jobs is intended as a vehicle to seed the idea in human minds to think about the human cost of their unrelenting consumer needs. The play is like a meme, the non-genetic replicator that Dawkins introduced to the world in The Selfish Gene. Watch it, understand it, and pass it on. It’s a persuasive consciousness-raiser.

The Agony and the Ecstasy of Steve Jobs has the power to change how you look at the world, because the sea of bright screens all around you in public will look different next time, and you’ll never look at the products that revolutionised our lives in quite the same way again.