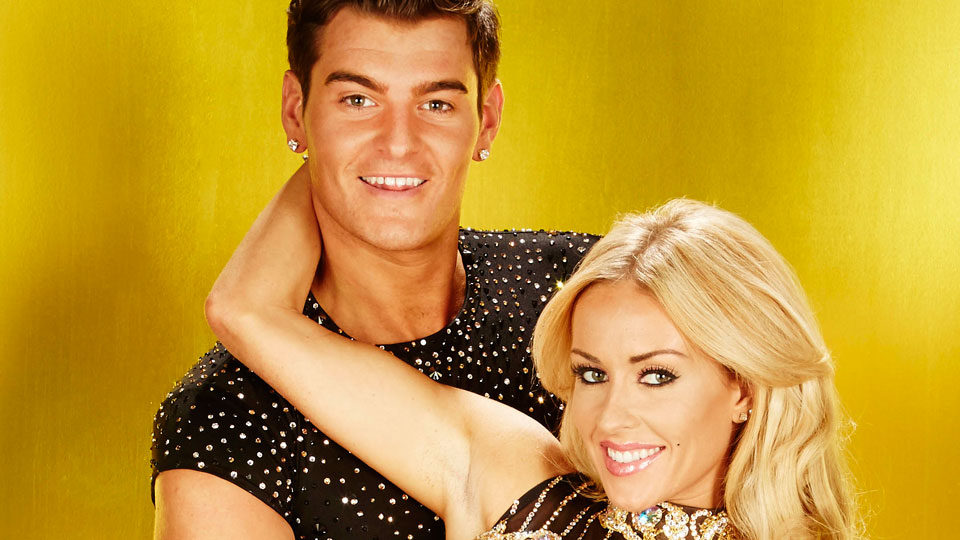 Dancing On Ice entered its third week tonight and it was time for the 10 remaining celebrities to duel against each other.

For the last two weeks the celebrities have been able to concentrate on getting the moves right with just their professional partner in a bid to win over the judges and the public. This week they were paired against each other based on leaderboard performance over the first two weeks.

The celebrity that wins the duel will be granted immunity from the public vote.

As the show started there was doubt that Samia Ghadie and Beth Tweddle would be competing due to injury and illness. Both women appeared at the start as the celebs were introduced so it looks like they will be skating after all. There’s nothing like a bit of drama is there?

First to battle tonight was former EastEnders actor Matt Lapinskas and former rugby player Gareth Thomas. Both celebrities topped the leaderboards during their first week. In the VT Matt said that they were all out of their comfort zone due to the lifts and quick dance moves. During training Gareth took a tumble but was soon back on his feet and working on his routine again. The couples skated to The Devil Went Down To Georgia by The Charlie Daniel’s band.

Ashley said it was an exciting way to open up the show. She said Matt committed to the performance whilst Gareth was labelled a ‘powerhouse’. Robin said he loved it and there was great energy from both of them. He said Matt has better musicality whilst Gareth has better footwork. Jason said the routine was rugged and at times ungainly. He said he would have liked to see more rivalry. Karen said both couples gave a committed performance.

All of the judges chose to save Matt meaning that Gareth would be up for the public vote.

Second to duel were Corrie’s Samia Ghadie and Olympian Luke Campbell. The VT showed the two were pretty well matched but Luke struggled with the lifts required in the routine. Samia suffered a rib injury during yesterday’s dress rehearsal and it was touch and go as to whether she’d be skating tonight. Thankfully she’s battling on. The two couples skated to This is Love by will.i.am and Eva Simons.

Robin said that Luke was ‘strong, powerful and in control’ before calling Samia a ‘little minx’. Jason disagreed with Robin about Luke but said Samia had really ‘stepped it up’. He said that Luke’s performance was ‘Olympically bad’. Robin interjected saying Luke’s posture was correct before Jason said Luke looked ‘dead in the face’. Ashley said she understood where Jason was coming from but said Luke did a good performance. She admitted that both celebrities had improved.

All of the judges chose to save Samia meaning that Luke would be up for the public vote.

Third to duel were Olympian Beth Tweddle and politician Oona King. Beth scored better than Oona in their first week but she was heavily criticised by Jason. In the VT Oona worried that Beth’s part of duel was better than hers. Beth suffered illness over the past few days and had to visit hospital for treatment. Thankfully Beth is up to performing and returned to the ice today. The couples skated to Sisters Are Doing It For Themselves by Annie Lennox and Aretha Franklin.

Karen said both celebrities have different strengths but said Oona needed to feel more confident. Jason said the duel lacked conviction and said he felt that Oona went into it admitting defeat. He said Beth had improved a lot since week 1. Robin said that Oona’s skating ability was nice but it needed to be more. He told Beth that she needs to get the skating to the same level as the tricks. Ashley said Beth ‘brought more’ tonight and told Oona she needs to enjoy it more.

All of the judges chose to save Beth meaning that Oona would be facing the public vote.

Shayne Ward and Anthea Turner were next to duel it out on the ice. Shayne got through on the public vote in week 1 whilst Anthea found herself in the skate off against TOWIE star Lauren Goodger. In the VT Shayne said he felt Anthea was a better dancer than him and it seemed the rivalry was pretty clear. Christopher Dean said that Anthea can’t skate as well as Shayne on her own. The couples skated to Broken Strings by James Morrison and Nelly Furtado.

Jason said that Shayne had better posture awareness but said he needs more of an emotional connection to the choreography. He went on to say Anthea has beautiful grace but said she needed more confidence on the ice. Ashley agreed with Jason about Shayne but said she thought Anthea did a fantastic job. Robin agreed with both Jason and Ashley. He said Shayne needs to be less mechanical and told Anthea if she keeps improving she’ll be on to a winner.

All of the judges chose to save Anthea meaning that Shayne would be facing the public vote.

The last two celebrities to duel were Keith Chegwin and comedian Joe Pasquale. Keith has survived the skate-off once and Joe, despite being at the bottom of the leaderboard last week, went through on the public vote. The two celebrities are considered to be the least abled in the competition and have been referred to as the joke acts. In the VT Karen admitted that Keith has no co-ordination and Joe promised it would be epic. The couples skated to Soul Man by Sam & Dave.

Karen said the duel was like the return of the Chuckle Brothers. She said Keith had speed on the ice whilst Joe was pure entertainment. Jason compared them to Laurel & Hardy but said Joe stares at the ice too much. He said Keith had the presentation and moves of Homer Simpson but he admitted he enjoys watching him. Robin told Keith to start skating as if he is taller as it will help and told Joe to keep entertaining. Ashley said they both make her smile when they hit the ice.

All of the judges chose to save Keith meaning that Joe would be facing the public vote.

As Keith and Joe left the ice, the first part of the Dancing On Ice live show came to an end.

The couples facing the public vote tonight are:

Tune in at 8.30pm to see which couple will be leaving Dancing On Ice tonight.