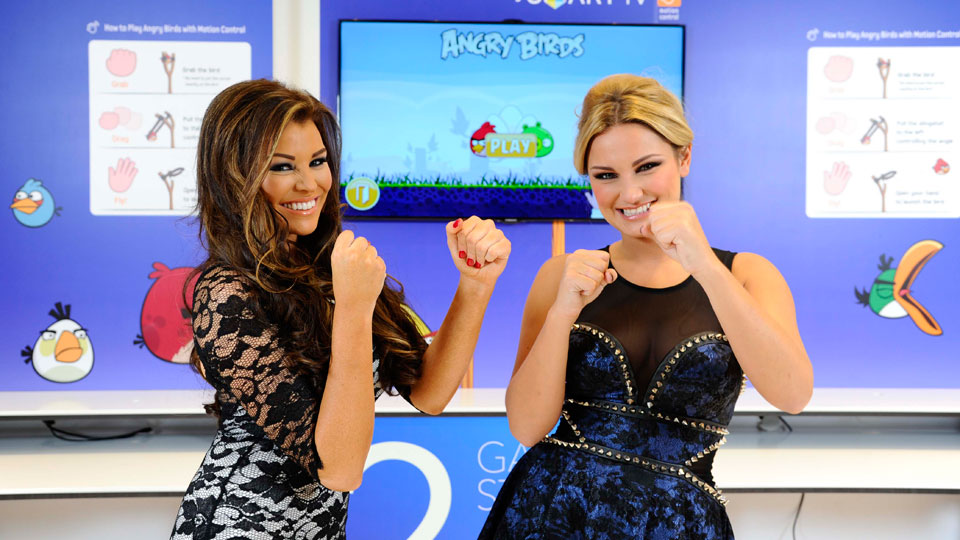 The Only Way is Essex stars Jessica Wright and Sam Faiers today migrated to the Samsung brand store, Westfield Stratford City in what was an all feathered battle to mark Angry Birds’ new home on Samsung Smart TV. The Essex pair showcased their Angry Birds skills to support Samsung’s search to find the best Angry Birds Smart TV player in Europe.

The reality TV pair got into a flap when they played the popular game on Samsung’s award-winning ES9000 Smart TV as they battled to see who would be flying high and who would be spitting feathers after playing the game at the Samsung Brand store. In the end, it was Sam who soared highest over her TV rival to be crowned the ultimate Angry Birds Queen.

Sam commented: “It’s great to come out as the top Angry Birds from TOWIE. We’ve all loved playing the game on our phones and ‘it’s well reem’ that you can have a go on your Samsung Smart TV too. It’s really cool being able to use the motion control to play the game, and the TV is beautiful too.”

The month long campaign, which ends next Thursday 13th December will see the best Angry Birds Smart TV players from across Europe fly into London for their chance to be crowned champion in the world’s first motion-controlled Angry Birds experience. As well as the battle for the coveted title, each European Angry Birds player will also have the opportunity to compete in a celebrity ‘All-Star’ final at Westfield Stratford.

Angry Birds fans can also take part in their own Angry Birds challenge by visiting the Samsung Brand store at Westfield Stratford City from 6th December. Entrants will be in with the chance of winning tickets to the European competition final on the 13th December.

Stephen Taylor, VP Brand for Samsung Electronics Europe said, “We are delighted that we can exclusively offer our customers the chance to play the world famous Angry Birds through their Smart TVs. Using Samsung’s intuitive and groundbreaking motion control technology really brings the game to life and it was fantastic to see the stars of The Only Way is Essex battling it out as part of the Angry Birds Challenge.”

The Angry Birds Smart TV App, available exclusively for Samsung, developed by Rovio Entertainment, enables Smart TV viewers to play the popular game using simple hand gestures via Samsung’s Motion Control technology. Powered by Samsung’s Smart Interaction, Angry Birds enthusiasts can play the game on the largest screen in the home, enjoying a fully immersive and interactive gaming experience. With just the wave of the hand, viewers can control game play features including initiating the slingshot and activating the unique skills of each bird.