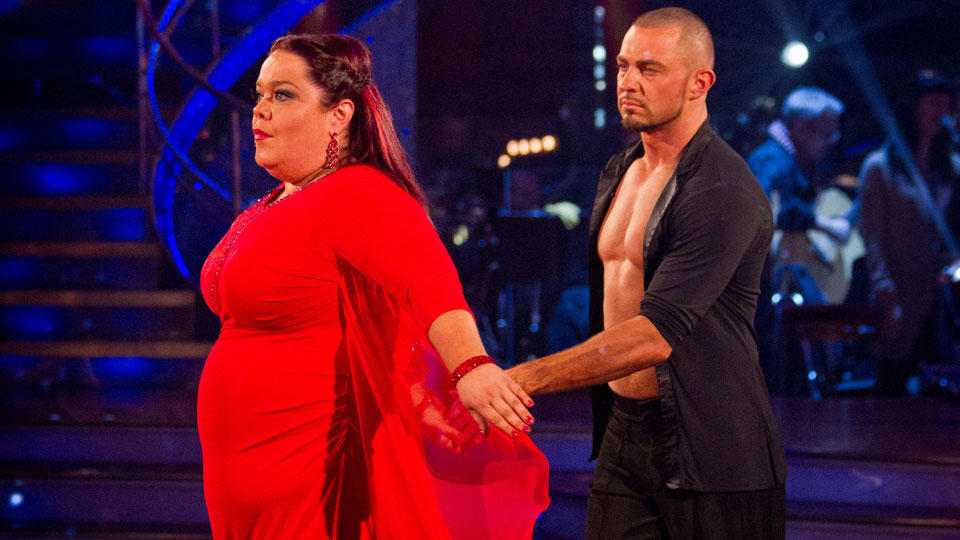 Team RiRo got their harshest comments yet from the judges on Saturday night for their Rumba but still managed to get an impressive score of 27.

Despite the judges finding fault with their routine, the audience loved it and so did we. This weekend, Robin Windsor and Lisa Riley are determined to win praise for their performance and get back at the top of the leaderboard.

We caught up with Robin to talk about last weekend’s Rumba, find out what is coming up this weekend and see how he’s feeling after falling ill this week.

How do you feel last weekend’s Rumba went?

Last weekend myself and Lisa danced the Rumba which the judges didn’t seem to like. The public were thrilled with it. It was completely different to what we’re used to doing. It was very toned back and understated. It shocked quite a lot of people that we could do something different. As I said before I think technically it was a very good dance for Lisa. She showed that she could transfer weight from foot to foot at a slow speed.

We were pretty surprised at the criticism. They seemed to pick the routine to pieces didn’t they?

Yeah. The judges obviously know what they’re talking about but I thought that we executed the dance really well. At the same time you’ve got to realise that it’s week 8 and they’re looking for even the smallest things that are wrong. Although we did get harsh comments we got decent scores so we were actually quite impressed.

How did Lisa feel about the comments?

Lisa was a little disappointed because she put all of her acting strengths into that. We put so much work into the Rumba. But you know what we got through and they left us until last to be called out which is the most horrifying experience because we really thought that was it. I spoke to my mum and she said ‘you had me from the very beginning’ and my mum doesn’t often say too much.

Leaving us until the end is the most nervous, anxious part of the entire series so far. You actually feel like you’re in the bottom three even though they do say it’s in no particular order. They just left us until last again.

Well you made it through and you’re back this week with the Quickstep. How has that been going?

The Quickstep is going really well. We’re dancing to Bring Me Sunshine which was made famous by Morecambe and Wise and I couldn’t think of a better song for Lisa to dance to. The choreography went in really quickly and we started off having a really good week. We’ve both been hit by a chest infection so we’ve gone from good to not so good. At the moment we’re struggling to get from the beginning of the dance to the end of the dance. Hopefully by Saturday night we’ll be on fine form to do the whole dance for everyone.

Have you missed much rehearsal time because of being ill or have you just battled on?

We tried to battle on today but it was proving useless. We had to take ourselves to the doctors and get a prescription for antibiotics to help clear this up by the weekend.

We’ve seen you and Lisa out and about this week. You went to see ‘The Bodyguard Musical’ on Tuesday night. What was that like?

We were very lucky to be invited to watch The Bodyguard Musical which is at the Adelphi Theatre at the moment and opens next Wednesday. I have to say it was one of the most fantastic shows I’ve seen and Heather Headley who is playing the Whitney Houston role would make Whitney very, very proud. It’s absolutely breath-taking and she stole the show. She also stole the  show at the Royal Variety Performance when I went to watch that the other week.

This week has also seen you as the cover star for the latest issue of ‘Gay Times’ magazine. How does it feel to have that out now?

The response to my cover on Gay Times has been absolutely incredible. I have to say I was a little bit chuffed when I saw it and I was really, really happy with the pictures. It’s a great thing to go into the newsagents and see me there plastered up on the shelf.

There’s been a lot of buzz about it on Twitter. When we revealed the cover on Sunday our feed went mental.

People on Twitter have been really nice. There’s been talk about me not having many clothes on and I made a few people’s day apparently. I’m glad I can do that for people out there.

You made my mum’s day…

(Laughs) I think I made quite a few mums’ days.

Week 9 of the competition is here this weekend and the final is nearly upon us. You must be starting to feel a bit more confident about your chances now surely?

There’s only 4 weeks left in the competition so obviously it’s getting really tough. I’ve been voted out the last two years on week 9 so this is known as my jinx week. The fact that both Lisa and I are sick is quite worrying because this is the week that notoriously I go home.

You’ve got to beat that Week 9 record. Tell us why the people at home should pick up their phones and vote Team RiRo this weekend.

Everyone needs to help us beat my week 9 jinx week because Lisa is doing so fabulously and she brings something really special to the show. As far as I’m concerned, and nearly everyone I speak to, she deserves to go all the way. With that extra push and my professional abilities I will try to get her there but we need the public’s help as well.