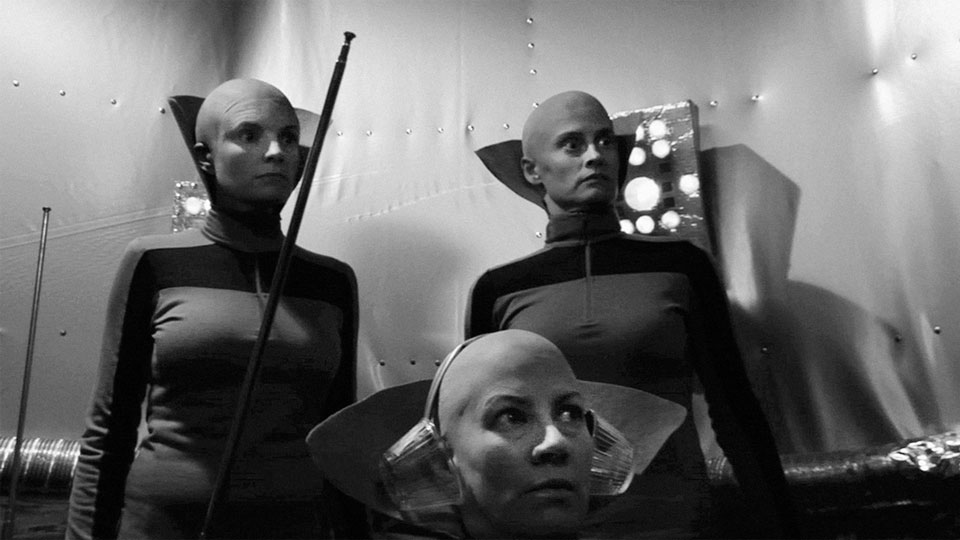 Convenience store worker Jane (Lisa Haas) meets alien Zoinx (Susan Ziegler) one day at her store. Not realising that Zoinx is a real alien from outer space, Jane falls head over heels for her and starts to pursue the burgeoning relationship. The two are being followed by two government agents who are tracking their activity but the women have no idea. Meanwhile two of Zoinx’s alien friends Zylar (Jackie Monahan) and Barr (Cynthia Kaplan) are also on earth trying to understand what love really means.

Codependent Lesbian Space Alien Seeks Same is as quirky as its title suggests. Shot in black and white like an old genre movie, the film was written and directed by Madeleine Olnek. At first the film is charming and draws you in with its bonkers premise but soon the novelty begins to wear off. The movie is a short 76 minutes in length but it feels like an overlong short movie that outstays its welcome.

One of the problems is that despite it being a great concept, the story just isn’t strong enough. Zoinks and her fellow aliens wander around looking for love in the hopes of getting their hearts broken so they can return to their planet. There are two sub-plots shoe-horned in – one concerning the agents or ‘Men In Black’ following the women and Zoinx’s alien friends causing havoc – but neither of them really goes anywhere. You have to wonder as well if Jane is of right mind when she doesn’t even seem remotely suspicious that Zoinks is behaving in a rather peculiar way.

The acting varies. Susan Ziegler is the strongest as Zoinx but the ‘alien’ accent she puts on becomes very grating very quickly. We understand why the character is speaking the way she does but it’s annoying none-the-less. The first time she barks ‘ha ha’ when laughing rather than laughing like a normal person is funny but soon it just becomes irritating. Lisa Haas isn’t great as Jane. She plays the character with wide-eyed oblivion but never really brings the character to life. She simply traipses around after Zoinx and you wonder why the character doesn’t question anything about her new-found love.

Codependent Lesbian Space Alien Seeks Same is a good idea in practice but sadly it doesn’t quite work for us. The idea is quirky and there are flashes of how good it could have been but sadly the film left us feeling cold. We like the premise but we think the execution, the story and the acting could have been a lot better.