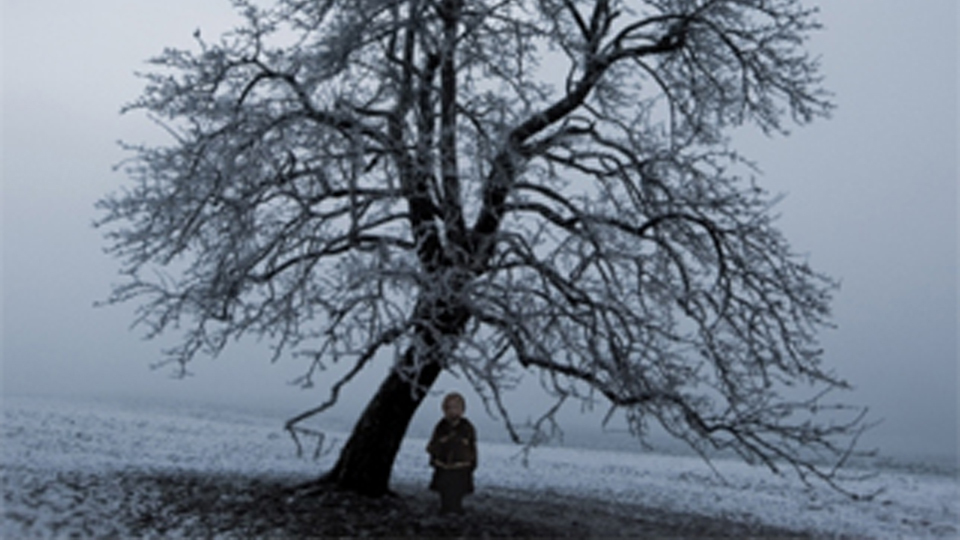 Adapted from Shakespeare’s The Winter’s Tale, A Winter’s Tale follows the broad brushstrokes of the plot in a modern language musical. Written by Howard Goodall (a phenomenally busy composer of TV and film scores as well as his own classical compositions) and directed by Andrew Keates, it fills the stage of the Landor Theatre with a sumptuous and emotionally-charged show.

King Leontes tries to persuade his dear friend and neighbouring monarch Polixines to extend his nine-month stay by another week. Polixines refuses, but then bows to pressure when Leontes’ wife Ekatarina asks him. Leontes instantly becomes jealous, suspecting his wife and friend of having an affair. Leontes’ jealousy consumes him, with disastrous consequences that require the passage of time and the next generation to attempt to restore harmony between the two kingdoms.

Shakespeare’s “problem play” turns out to be ripe subject matter for musical treatment. The breadth of emotion and the complete tonal shift between the first and second acts offers plenty of scope of variations in melody and pace, and Goodall takes full advantage. Where the location shifts from the royal court to the countryside, Goodall’s musical suite evolves from an operatic flavour to rustic melodies that include a highly enjoyable jig about the wonders of sheep. Piano, played by George Dyer, and cello by Stefan Knapik prove, as always, a perfect marriage. They unite to form the core instrumentation. Standouts songs include the electrifying The Trial Of Queen Ekatarina, in which the ensemble take part in a frantic courtroom drama, and the spine-tingling All You Need To Know that rounds out the action with a cracking showstopper. As well as crafting decent melodies, Goodall creates songs that resonate, drawing the audience into the world of the story and keeping them there.

A Winter’s Tale is an impressively conceived piece. Goodall gets to grips with the story straight away and ably conveys mood through music. With a fairly sizable cast, he establishes characters quickly. Perhaps most fundamentally of all, the melodies are excellent and the songs memorable, building to exhilarating climaxes through a powerful ensemble.

The performances are universally excellent. Pete Gallagher has the toughest task, since Leontes veers between loving husband and mad paranoid tyrant whilst covering a lot of ground in between, and he’s entirely credible throughout, using his great height to advantage and cutting an imposing presence on stage. Alastair Brookshaw is also excellent as the more sympathetic Polixines, but he peppers his performance with enough spikiness to warn the audience that there’s a dormant tyrant inside him too who could easily be coaxed out. Helen Power completes the triumvirate of royalty as Leontes’ unfortunate wife Ekatarina, who calls for and receives the lion’s share of the audience’s sympathy.

Once the story shifts, the ensemble of the first act are given their moments to shine. Gareth James Healey and Cieran Joyce form an enjoyable comedy double act of innocence and roguery as Zeki and Rob. Fra Fee and Abigail Matthews combine beautifully to form the gorgeous young couple whose mismatched romancing forms the crux of the second half. Their duet When You Sing is adorable. What sweet music they make! Denis Delahunt (who was also terrifically funny in The Mystery Of Edwin Drood at the Landor Theatre) is on fine form again as the shepherd Melik, winning most of the laughs with a warm performance of impeccable comic timing. Watch out for his wonderful line that covers Shakespeare’s strangest stage direction…

The tonal shift after the interval allows for the comedy to be brought to the fore. Following a tense first act about intrigue and paranoia, it took the audience a little time to warm up to the complete change in atmosphere, but the ingenious visual comedy of Polixines and his servant Camillo infiltrating the shepherds’ sheep festival with cunning use of undercover disguises brought the house down, and underlined the singular shift in tenor.

The story is a fairytale, and best viewed as one, since it’s easy to pick holes in the somewhat implausible resolution. It works because you care for the characters – and this elevates A Winter’s Tale to a fable about redemption and the potency of forgiveness. Nevertheless, it’s easy to buy into the fairytale nature of the story thanks to the costumes and design. The staging is effective in conveying the shift between the acts too, metamorphosing between the palatial and the pastoral, with both settings easy on the eye sharing bronze autumnal hues. The costumes pluck the most striking fashions from different eras, where Polixenes’ crow feathers are a further nod to the operatic.

A Winter’s Tale is a beautiful production, bursting with great songs and pitch perfect performances. The close proximity of the audience to the stage allows it to make an impact from the start. Aided by memorable songs and note-perfect live musicians, it’s a show that boasts considerable talent in every department.