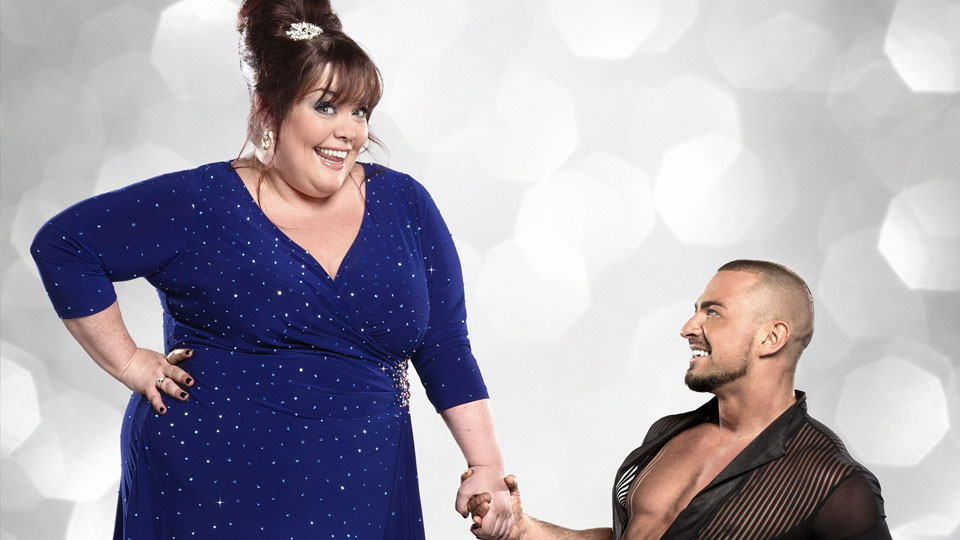 Halloween has been and gone so this week it’s back to business on Strictly Come Dancing as the 11 remaining couples battle it out to stay in the competition.

At the end of last week’s show Louis Smith found himself at the top of the leaderboard with his partner Flavia Cacace. Sadly former EastEnders actor Sid Owen departed the competition after a tough week that saw his partner Ola Jordan replaced by Iveta Lukosiute during training to allow her time to visit her sick mother in Poland.

This week’s show took away the gimmicks of the previous two weeks and the usual Ballroom and Latin costumes were back. Who topped the leaderboard and who left a lot to be desired?

Kimberley Walsh from Girls Aloud was the first celebrity to take to the floor with her partner Pasha Kovalev. After wowing the judges with their Quickstep, the couple scored their highest marks to date. For this week’s show Kimberley performed the Salsa but could she overcome her knee injury and wow the judges once again? Len hailed the return of ‘nimble Kimble’ and called it a sparkler. Bruno said that she had ‘luscious hips’ and praised her lift. Craig loved it and Darcey called her a natural performer.

Team RiRo were next to dance as Lisa Riley and Robin Windsor took their place on the dancefloor. Last week’s Charleston was a lot of fun but wasn’t the biggest hit with the judges. Regardless they still scored well but Craig wasn’t happy with Lisa’s footwork. Tonight Lisa and Robin danced the Tango. Did they manage to get the judges back on side? Bruno said no one could fault her performance but admitted it could have been a bit sharper. Craig said Lisa needs more glide across the floor and caused a row with Len and Bruno. He did say that the routine was amazing and he enjoyed seeing Lisa doing something more serious. Darcey said it could have been cleaner but agreed that she always gives a good performance. Len commended Lisa for always giving 100% but said it needed a little refinement.

TV critic Richard Arnold escaped the dance-off last week after impressing with his manly Paso Doble. Not all of the judges were happy with his performance but it seems the viewers were. For tonight’s performance Richard performed the Foxtrot with his partner Erin Boag. Did he perform as well as last week? Well in short no as Richard forgot his steps during the performance. Craig said was ‘a complete disaster’ whilst Darcey told him that his wooden stance was likely the reason why he struggled. Len called Richard ‘the plod father’ and Bruno said he had a face like a ‘frozen haddock’ before slipping up and looking like a puppet who’d had his strings cut.

Denise Van Outen found herself receiving a bit of criticism last week for the first time when her Cha Cha Cha didn’t take her to the top of the leaderboard. This week she slowed the tempo down for a Viennese Waltz with her professional partner James Jordan. After the disappointment of last week could Denise climb back to the top of the leaderboard? Len said it was first class calling the performance ‘spectacular’ whilst Bruno called it ‘a romantic dream set to music’. Craig simply said ‘amazing’.

Last week saw Victoria Pendleton massively improve as her Tango wowed the judges. For this week’s show she was back to Latin for the Samba. The intro VT showed that the two had had quite a week full of arguments and disagreements. Could they put on a united front and enjoy themselves? Len said that Victoria was brave by entering the studio over the judges’ desk. Bruno said the performance was ‘Las Vegas with a hangover’ and Craig said he thought she did quite well with the routine. Darcey said Victoria started well but criticised her lack of focus at the end.

Louis Smith had a fantastic week last week with his Tango which saw him top the leaderboard. Over the weeks Louis has really improved and is looking like a strong candidate for the final. Tonight Louis danced the Samba with his partner Flavia Cacace. Another week at the top of the leaderboard? Bruno said the Samba suited Louis perfectly before said he bordered on Salsa at times. Craig said Louis made the dance look very masculine whilst Darcey said she was disappointed because the routine was a bit too safe. Len said he liked seeing so many classic Samba moves in the routine.

Colin Salmon found himself in the bottom two last week but was saved by the judges following the dance-off. His Salsa may not have won over the viewers but that’s not stopped Colin from coming back fighting. This week he was dancing the Foxtrot with his partner Kristina Rihanoff. Did he do enough to save himself from the dance-off? Darcey said Colin ‘glided beautifully’ whilst Len disagreed saying he looked like he was ‘dancing on a shagpile carpet’ but thought he coped well. Bruno said Colin’s leg had ‘more extension than Darcey Bussell’s’.

Former Westlifer Nicky Byrne has been improving every week of the competition and impressed during Halloween week. His mad scientist themed Tango won his lots of praise and made him a contender. Tonight Nicky danced the Rumba with his partner Karen Hauer. Could he continue to build on his burgeoning skills? Darcey said that she would have liked Nicky to have seduced Karen all the way through and include more dance content. Bruno said Nicky had intensity and purpose commenting he thought the performance was strong. Craig said it was a series of presentations with not enough basic Rumba.

Fern Britton didn’t have the best week last week failing to impress the judges with her American Smooth. Despite getting through the results show, Fern worried that she was too close to being in the bottom two. This week it was the Paso Doble for Fern and her partner Artem Chigvintsev. Did she put enough fire in the routine? Len said there was fizz but it never exploded. Bruno likened the routine to polishing the floors and Craig said he was distracted by Artem’s chest. Darcey liked the choreography and said Fern was assertive.

Michael Vaughan really pulled it out of the bag last week with his Quickstep and shocked both the judges and the audience. Not only that but he catapulted towards the top of the leaderboard after being close to the bottom every week. This week Michael danced the Foxtrot with his partner Natalie Lowe. Bruno said that Michael was still ‘in the zone’ and expressed his hope that Michael’s Latin would also improve. Craig said that Michael needed ‘swing and sway’ in his steps. Darcey said Michael shines at ballroom and Len said ‘best Foxtrot of the night’.

The last couple to dance tonight was Dani Harmer and her partner Vincent Simone. They opened the show last week with a Scooby Doo inspired Cha Cha Cha. Tonight Dani and Vincent danced the Jive. Did she manage to have another good week? Craig said he ‘copped an eyeful’ when Dani went through Vincent’s legs and told her to keep her legs together for that move. Darcey said she loved the Jive. Len ‘loved it’ and Bruno said it was ‘a cutie pie’ of a Jive.

Tune into Strictly Come Dancing tomorrow night at 7.20pm to find out which couple will leave the competition.