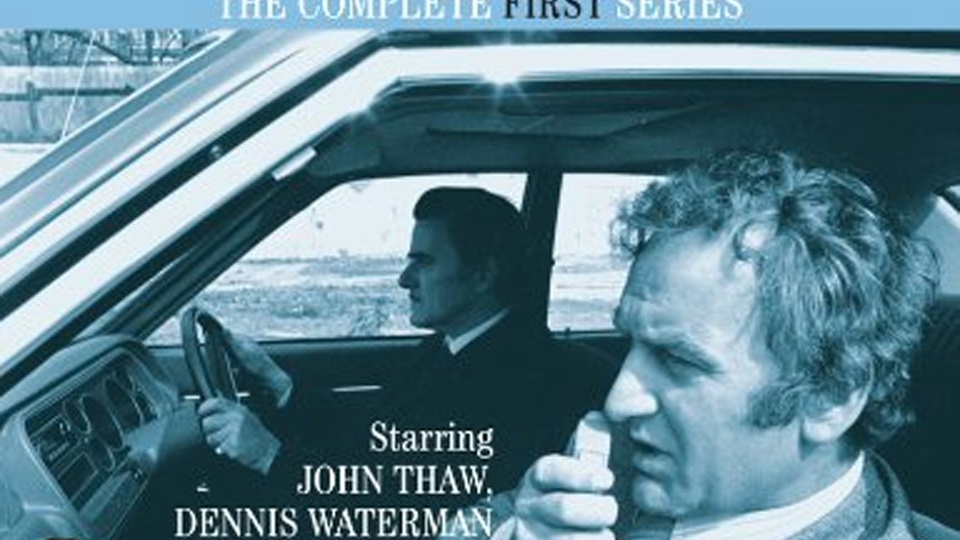 In January 1975 Jack Regan and George Carter announced themselves on British television screens in a brand-new police drama The Sweeney. The brainchild of Ian Kennedy Martin, The Sweeney was a conscious attempt to add a touch of grit and realism to the genre that had previously been represented by quaint series such as Dixon Of Dock Green.

The Sweeney follows the officers of Scotland Yard’s Flying Squad (for the few who don’t know it’s coined from Cockney rhyming slang – Sweeney Todd: Flying Squad – get it?) who are the tough plain clothes officers generally first to the scene of serious and violent crimes. Its police officers are hard-edged: they swear, drink, smoke and fornicate. They also kick down doors, wield pistols and beat up baddies. They tackle bank robbers, murderers and gangsters, and never once stop to help old ladies cross the road or give directions to tourists.

With witty one-liners, flared trousers and filming on real London streets as the series followed the lives of rough and sometimes amoral heroes, The Sweeney eclipsed every police drama that had come before it and rewrote the genre. The British public was hooked, and television changed forever.

As well as the groundbreaking concept, there are many things that set The Sweeney on the pedestal of truly great television. Another major factor is its star performer; for although Regan and Carter were intended as a double act and the two leads undeniably have great screen chemistry, it’s John Thaw’s Jack Regan who steals the show. His magnificent piercing cobalt eyes positively burn out of the screen, especially on this Blu-ray release where you can see every hair in his voluminous eyebrows. In Jack Regan Thaw creates one of the most memorable TV characters of all time. Dennis Waterman is excellent support as George Carter, and he occasionally has moments to shine, but these are evidently sops thrown by the writers who had much more fun writing for Regan (who had after all given his name to the pilot TV film Regan, also out on Blu-ray).

This release of all thirteen episodes comprising series one of The Sweeney looks magnificent. It was shot entirely on film, which is what allows for its inherent high-definition to be picked out on modern screens with the newly remastered prints. The colours are exceptionally good. Reds, which often look washed out on film, are vibrant, and the image is crisp enough to see every weave of corduroy jacket and turtleneck sweater. The Sweeney proves that filmed television equally merits the high-definition treatment every bit as much as movies.

The series kicks off with the episode Ringer, written by regular contributor Tony Preston. It features a triumvirate of great British character actors as the baddies; with Ian Hendry (The Avengers, Get Carter) and Alan Lake (most famous for marrying Diana Dors) the heavies to the suave and sophisticated crime boss underplayed by Brian Blessed. Yes, you read that correctly. It was a year before Blessed’s superb performance as Augustus in I, Claudiusand came at a time in his career before he concentrated solely on sending himself up with over-the-top bluster. As the sophisticated pipe-smoking crime boss Frank Kemble, Blessed is blisteringly good and sets the bar for multifarious high-profile actors who would follow as the nemeses of Regan and Carter.

When Regan leaves his keys in his bird’s mini and crosses the road to make a call from a phone box (the mobile phone must prove the screenwriter’s curse and blessing) it’s stolen by young ne’er-do-wells, who discover Regan’s surveillance camera and photographs in the boot that compromise Kemble’s latest gambit. Tipped off that the Sweeney are on to them, Kemble has to decide whether or not to go ahead with the heist, and the episode ends with a satisfying brawl on a building site. There are apocryphal stories from Waterman’s autobiography of Thaw finding a kindred spirit in Alan Lake, and their subsequent indulgence in brandy breakfasts; though to what extent Thaw was raising hell during the making of The Sweeney hardly matters: the end result on screen is all that counts, and he’s magnificent in every frame.

Jackpot is the first episode to be penned by Troy (brother of Ian) Kennedy Martin (although he’s credited under a pseudonym owing to his unhappiness over scriptural changes), who would a decade later pen Edge Of Darkness, probably the greatest original BBC drama of all time. He comes up with a (for the time) cutting edge idea: the Sweeney are tipped off about a bank robbery and intercept the thieves, successfully securing all of the loot – save for one bag of £35,000 that seems to be missing. What’s worse is that suspicion falls on a police officer, and the team is being trailed by a documentary film crew. Talk about a PR disaster. Regan wonders if a clue to the missing bag’s whereabouts can best be found trawling through the film crew’s footage. Character actor Morris Perry is introduced as Chief Inspector Maynon, who charges Regan with tracking down the missing dough and saving face.

Thin Ice is also penned by Troy Kennedy Martin, and it starts to develop the mutual understanding between Regan and his superior. Regan is a maverick and a man-management nightmare for his boss, the smooth and educated Haskins (the late Garfield Morgan). He’s determined to bring down crime boss Bishop (Alfred Marks) but he’s skipped out of the country on a ferry (cue a guest appearance by a champagne-wielding Robert Gillespie as a surly steward), and Regan’s told to leave his colleague Pringle (Peter Jeffrey) to rein him in. Regan’s not the sort of man to worry about treading on toes, and he finds a way to exploit Bishop’s only known weakness (not to mention saving grace): his unquestioned loyalty to his pet dog. The episode enjoys a light and comedic touch that stays just the right side of sending itself up. It features Brian Glover as one of Bishop’s simple-minded heavies who is played by both sides. It’s the episode that establishes a surprisingly varied tone between individual instalments, and is a valid reminder that The Sweeney wasn’t all grit and realism, but occasionally played for laughs.

We really start to see Jack Regan’s character becoming fully rounded out by the episodes Queen’s Pawn andJigsaw, in both of which he doggedly, or even obsessively pursues crooks who have, as far as he’s concerned, escaped justice. In the former, Tony Selby plays the jack the lad whose affluence following a life of crime bags him the best slippery lawyer money can buy (in the form of the ever-suave Julian Glover). In Jigsaw, Regan is an unwitting alibi to the crooked Eddie Boyse (Del Henney) at the time a murder takes place. Regan is convinced it’s no coincidence and that Boyse isn’t the reformed character he’s pretending to be; and he breaks every rule in the book to force Boyse to reveal himself. Both are tightly-written pieces using the popular cat-and-mouse game between police officer and criminal as their central premise.

After an intense few episodes, Night Out is a welcome return to a more comedic story, which disguises the fact that the plot is hokey. In fact, it’s worth addressing here that the writers don’t always craft an entirely satisfactory conclusion to each fifty-minute episode, but the quality of the dialogue and performances is always sufficient to provide an entertaining slice of television and allow the viewer to overlook the odd structural flaw. In this one, the well-trodden (even within series one of The Sweeney) premise of a bank robbery sees Regan observing it from across the street. This allows him to spend time with an old girlfriend and indulge in some bedroom activities whilst on the job, as it were. It also features a delightful comic turn by the ever-reliable TP McKenna as another of Regan’s supercilious superiors, determined to swoop in and take all the credit for foiling the robbery. The Placer is a Regan-heavy episode in which he goes undercover as a truck driver. It’s notable for the magnificent moustache Thaw is compelled to cultivate to complete his disguise which could easily help him audition for The Village People. Regan ends up with only his wits to survive on when his cover story is blown, since he can hardly rely on Carter to arrive before the nick of time. Or can he?

The last few episodes retain the series’ ability to draw big-name guest actors. Hence Warren Mitchell (Till Death Us Do Part) pops up in Big Spender, and Warren Clarke (Dalziel And Pascoe) in Contact Breaker, though in a nice reversal of expectation Regan is convinced of his innocence and pours all his energy into proving it. The stakes are raised for the last episode, Abduction, in which the viewer also learns more about Regan’s history, and meets his ex-wife Kate (Janet Key) after their daughter is kidnapped by – of all people – Wanda Ventham. There’s also an appearance by a former Mrs Dennis Waterman – Patricia Maynard.

By the end of the thirteenth episode you’re left wanting more. Thankfully a further three series were made. Let’s hope it’s not too long before they’re scrubbed up and presented on Blu-ray by those nice folks at Network.

The extra features provide a sobering justification for the timeliness of the release. Writer Troy Kennedy Martin and actor Garfield Morgan have both died since recording commentaries on selected episodes, and it’s fortunate that their memories of making the show were preserved for posterity when they were. Other episodes are introduced by big-name guest stars. Thus Tony Selby, John Forgeham, Prunella Gee, Dudley Sutton (twice!), Warren Mitchell and Wanda Ventham provide retrospective and entertaining five-minute hooks to selected episodes.

The sound and picture quality are sufficient draws in themselves for avid fans of quality TV to plump for this glittering high-def release, since The Sweeney oozes quality in every department and stands up as one of the best television dramas ever made. It’s a product of its time as well as having been well ahead of its time, and the overall verdict is that it’s exceptionally well-made fun. Indulge yourself in a hugely entertaining cop drama that’s one of the highlights of 70s television.