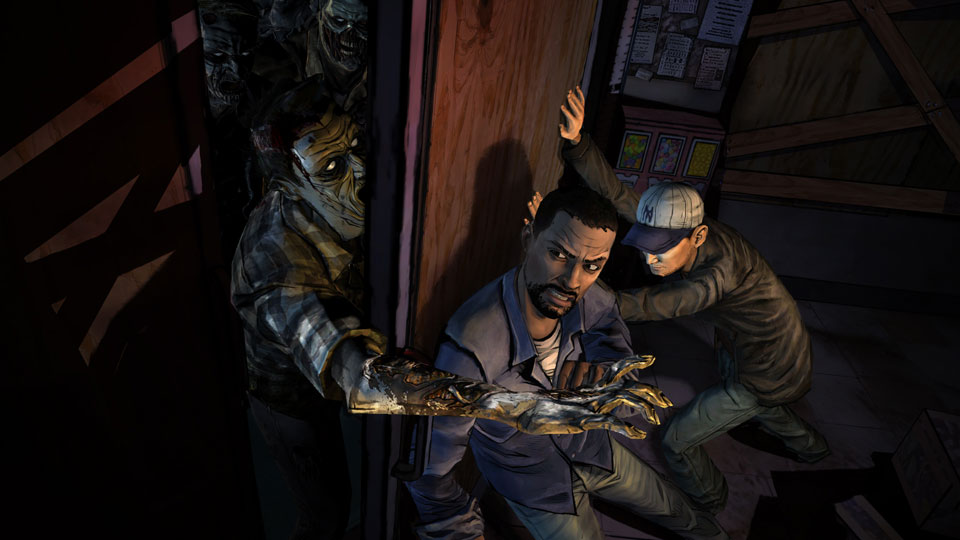 The Walking Dead has become one of the most popular TV shows in the world and broke AMC records during its first season. A hit on this side of the pond too, the show has brought one of the best zombie horrors to the small screen reinventing the genre as it goes. Based on the comic books by Robert Kirkman, the series has been turned into a computer game by Telltale Games and the first episode, A New Day, has just been released.

When news of a game first surfaced we expected it to be a retail boxed version but Telltale Games decided to take it down the increasingly popular episode route that has proved a success with the continuation of the Sam & Max andMonkey Island series as well as newer hits such as Law & Order and Jurassic Park. If you’re familiar with any of those titles then you probably think you know what to expect from The Walking Dead. Well think again because The Walking Dead is a completely new experience that far surpassed our expectations.

Avoiding the expected combat style route that many expected, The Walking Dead is decision-based, narrative-driven game that puts you in the shoes of new character Lee. Whilst on his way to prison in a cop car, Lee is left fighting for his life when the car hits something in the road and overturns in the rough. Escaping from the car Lee soon finds the dead cop that was driving come back to life as a zombie and after a quick battle scrambles his way to a desolate house where he finds scared little girl Clementine. We won’t spoil any more of the story but suffice to say there’s plenty of characters to meet and plenty of scares along the way.

The first episode weighs in at around two to two and a half hours in length depending on your ability to solve some of the trickier puzzles later in the episode. Characters new and old feature along the way. Main character Lee is a new addition but fans of The Walking Dead will recognise Glenn and Hershel.

Much of the game relies on conversation with every decision you make changing the course of the rest of the game. Your response during conversations makes the character you’re talking to respond in different ways and they remember things you say and do. This means you have to be pretty careful not to get on the wrong side of certain people if you think you may need them later on. There are also plenty of moral dilemmas throughout such as choosing which of your fellow survivors lives during zombie attacks and also what to do if one of your camp is bitten. Make no mistake that The Walking Dead brings the most brutal decisions into your power leaving you feeling not only guilty but wondering if you’ve made the right decision. We’re pretty sure towards the end of the episode we made a terrible decision but we’ll likely find out in the next instalment.

One of the things we liked about The Walking Dead is the statistics it shares at the end of the episode. You see a dashboard depicting all the decisions you made with a comparison of what other players chose to do. We thought. This was a cool little addition and made us realise we’d definitely made one very poor decision.

Visually The Walking Dead is stunning. Taking the comic book as its basis it translates beautifully onto PSN. The characters are impressively detailed and the locations rich with plenty to explore. Amazingly even the voice acting is really good which is pretty rare for this type of game.

The control interface is pretty easy to use. A faded cursor with four points appears on the screen. When you hover over something you can interact with it makes it obvious and highlights the different actions available. This is a feature you can disable at the beginning of the episode if you want to make your life even more difficult. Our only complaint is that sometimes the camera angle is restrictive and we would have liked to have had a 360 view throughout. The way the camera is set can make it difficult to fully explore an environment.

The Walking Dead – Episode 1: A New Day brings the rich storytelling of both the comic book and the TV series to a new platform and succeeds on every level. Anyone worried that this would be a cheap cash-in can be assured that it’s anything but. Survival horror has never looked so good and the refreshing decision-based gameplay adds a new twist to a previously exhausted gaming genre. After seeing the trailer for Episode 2: Starved For Help we can’t wait to rejoin Lee for the next part of his adventure.

Pip Ellwood-Hughes
Pip is the Editor of Entertainment Focus and the Managing Director of agency Piñata Media.
Next article
The Walking Dead: Episode 2 – Starved For Food review