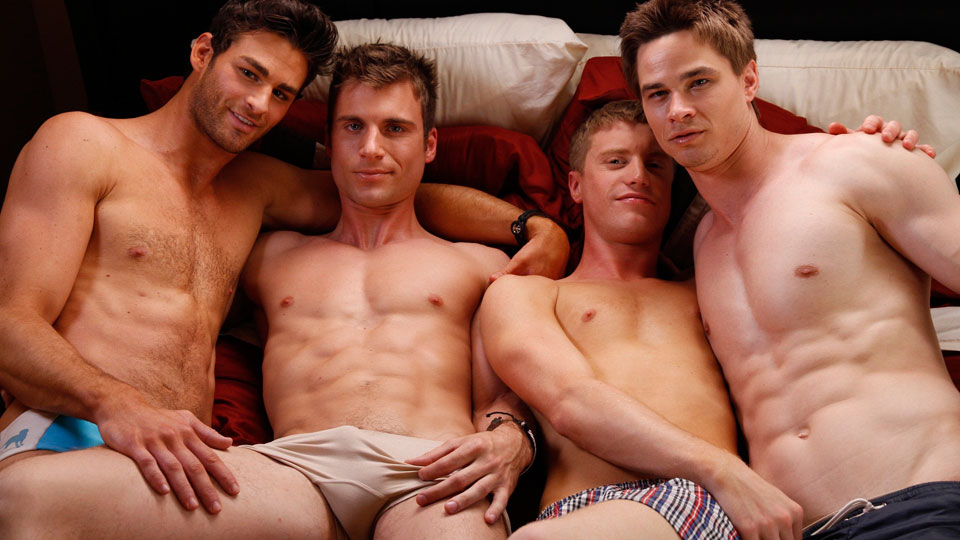 Zack (Chris Salvatore) and Benji (Aaron Milo) decide to vacation at an all-male resort in Palm Spring and face a difficult decision when one of them suggests they explore an open relationship for the weekend. Still smarting from his break-up with Zack, Casey (Daniel Skelton) decides to take a break with Penny (Lilach Mendelovich) and they end up at the same resort. Determined to show Zack he’s moved on Casey convinces Peter (Michael Vara) to pretend to be his boyfriend unaware that things are far from plain sailing between Zack and Benji.

Eating Out: The Open Weekend is the fifth instalment in the popular Eating Out series. Popular characters Zack, Casey, Benji, Penny and Lily all return for another sex comedy with its tongue firmly in its cheek.  Eating Out is as loved as it is criticised but if you go into the movie’s expecting a saucy and fun time then you won’t be disappointed.The Open Weekend is perhaps the raunchiest instalment yet with plenty of male flesh on display (and some hot ladies if you’re into that kind of thing).

The Open Weekend is a worthy follow-up to last year’s Drama Camp and continues to build on the characters we’ve come to know and love. Zack has to adjust to not being the hot one in his relationship, Casey can’t decide if he wants Zack back or not and Penny and Lily face-off for the attention of a man. Benji on the other hand wants to shag everything that moves and makes Zack question his decision to leave Casey.

Over the course of the movie there’s the usual shenanigans where the characters deceive one another, enjoy a few sexual encounters and are forced to face their true feelings. All of them learn that what they thought they wanted may not be the case but it’s how they get to that conclusion that is so entertaining.

The selling point of Eating Out has always been its hot cast and this new instalment certainly doesn’t disappoint. Not only do we get the smoking hot Chris Salvatore, Aaron Milo and Daniel Skelton, we also get a new addition in the shape of Michael Vara. Vara plays Peter, an old school friend of Casey’s and brings an additional layer of buffness and pecs to the proceedings.

Of course we love seeing our favourite Aaron Milo back on our screens and he’s looking hotter than ever as the rather saucy Benji. He gets to flex a bit more of his acting muscles in this movie and he also gets plenty of opportunities to wear next to nothing (which is absolutely fine by us).

Eating Out: The Open Weekend will delight fans who have followed the series so far. Aiming to be a gay equivalent to the American Pie series, Eating Out always delivers on its promise of sex, nudity and buff guys. The Open Weekend is a thoroughly enjoyable raunch fest and we’ve got our fingers crossed that a sixth movie will be following in the not too distant future.