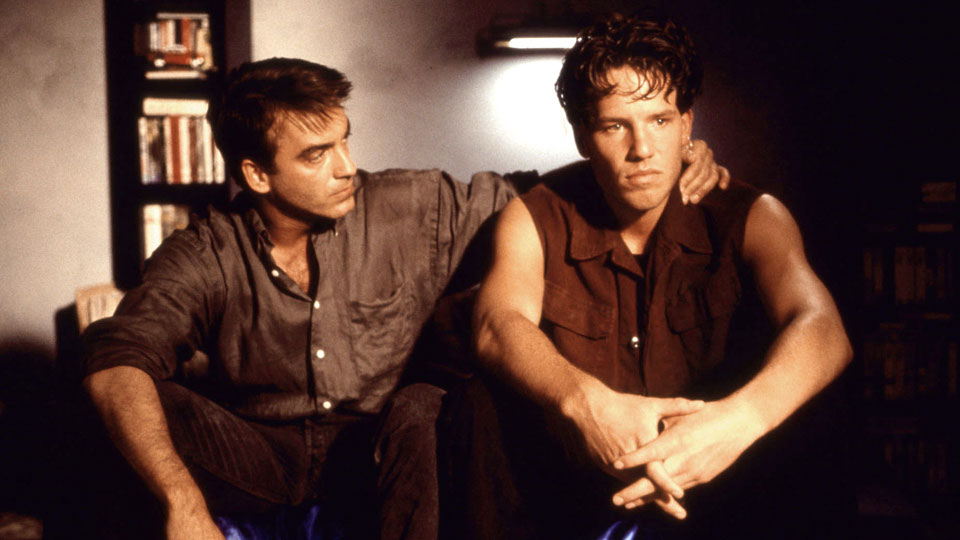 Welcome to the first instalment of Celluloid Closet, our new Gay Focus section, where we’ll be bringing you features about Gay Cinema classics that you may or may not have heard of.

To launch the section with a strong start our first pick for Celluloid Closet is Regular Guys aka Echte Kerle. The German movie directed by Rolf Silber was released in 1996 and in our eyes is one of the classics of the Gay Cinema genre. A comedy of misunderstanding, Regular Guys follows the story of cop Christoph (Christoph M. Ohrt) who goes on a bender after being kicked out of his apartment by his cheating fiancée. Waking the next morning Christoph finds himself in bed naked with gay mechanic Edgar (Tim Bergmann) and isn’t sure what actually happened.

Christoph then spends the duration of the movie trying to figure out what happened with Edgar and begins to question his sexuality. Whilst Christoph feels that he’s heterosexual, he doubts himself whilst trying to understand how he came to end up in Edgar’s bed. His confusion isn’t helped by Edgar’s refusal to tell him what happened or his constant advances.

Outside of his budding relationship with Edgar, Christoph must deal with his work colleagues, one of which seems to be attracted to him but believes that she stands no chance because she thinks he’s gay.

Regular Guys raises a lot of issues and in many ways was way ahead of its time. Dealing not only with the interaction between an openly gay man and a straight man, the movie also explores the perceptions of those kinds of relationships. Christoph has to ensure speculation and labelling when he moves in with Edgar as his colleagues believe this to be a sign that he’s secretly gay.

In actuality he moves in with Edgar through a lack of other options but the way the men learn to understand each other is something pretty special. One scene in the movie shows Edgar ignore Christoph’s boundaries by climbing into the bath with him. Whilst initially uncomfortable for Christoph, it proves to be a turning point in the characters’ relationship allowing them to move beyond the usual barriers to a state where they understand one another better.

The movie also explores the changes that can occur to a person’s moral compass when it comes down to individual circumstances. Despite being a cop Christoph feels the need to protect Edgar who makes his living working on stolen cars. The issue provides Christoph with a moral dilemma; turn in his new friend or turn a blind eye.

As well as being a superb movie, Regular Guys was the breakthrough film role for actor Tim Bergmann (who can currently be seen in Sasha). Bergmann pulls the role off with ease upping the camp at times and looking every inch the hunk we’d like to wake up with after a night on the sauce. He’s a fine actor too putting subtle nuances into the performance and turning in an emotive portrayal of a man who may appear confident but has deep lying insecurities.

Regular Guys is a classic and we feel a fitting way to launch Celluloid Closet. With impressive turns for its two lead actors and plenty of amusing plot devices, the movie is one of the finest we’ve seen in the Gay Cinema genre and certainly one of the best gay movies to come out of Germany. If you haven’t seen it we highly suggest you get your hands on a copy.

Regular Guys is available to buy on DVD now through TLA Releasing.

Pip Ellwood-Hughes
Pip is the Editor of Entertainment Focus and the Managing Director of agency Piñata Media.
Previous article
Merry Christmas from Steam Room Stories
Next article
Edge Of Seventeen