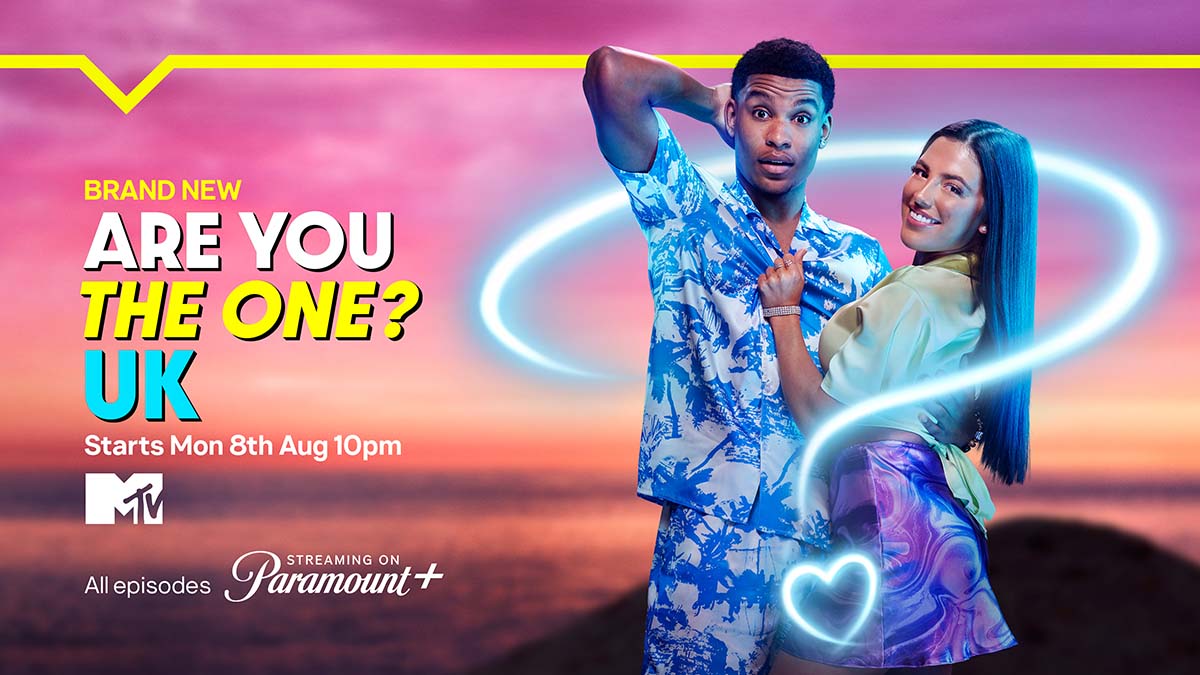 ‘Are You The One?’ is launching its first UK series on Paramount+ and MTV from Monday 8th August 2022 it has been announced.

Hosted by broadcaster and presenter Joelah Noble, ‘Are You The One?’ is set to make a splash in the UK after eight seasons in the US.

‘Are You The One? UK’ follows 20 unlucky-in-love singletons whose scientific ‘Perfect Match’ is somewhere in the luxurious Malta villa – all they have to do is find them. If they can uncover all ten Perfect Matches by the end of the series they will be rewarded with not only love, but a huge cash prize.

With plenty of challenges, dates and the dreaded Truth Booth to help them decipher the matches, our singles take part in Match Up Ceremonies in each episode to determine who is the one, and who is just another summer romance.

Host Joelah Noble said: “I couldn’t be more excited to be fronting the first UK series of ‘Are You The One’. I have loved this show for years, so it really was a dream job for me!Expect romance, drama and passion … all the best ingredients for an amazing series which teaches us that it’s not always easy to find your ‘perfect match’ but it’s very much worth it!”

Find out more about the girls and guys taking part below:

Cacherel is a 20-year-old student from Acton, West London currently studying in Nottingham, where he also works part-time as a children’s instructor, model and dancer – his dream is to open dance schools around the world.Cach describes himself as an “old soul” and tends to date older women, with two long-term relationships under his belt. He’s a romantic at heart but has never had “that feeling” when you find the one, and hopes to find his perfect match in the house.

Charlie is a 22-year-old online fitness coach from Dorset, who describes himself as a ‘big family guy’ and is keen to find a girlfriend who his parents and younger sister approve of.Charlie admits to wearing his heart on his sleeve and falls quickly, but hasn’t managed to hit the one year milestone with a girl. His friends say his life has more drama than a soap opera, as a self-confessed womanizer with a 100% success rate, will Charlie change his ways and find his twin flame?

Ismail is a 28-year-old barber shop owner based in London who describes himself as ‘loud, goofy and silly’ who loves to make people laugh. Despite being confident with his friends, he admits to being an introvert and rarely approaches girls on a night out due to fear of rejection.After being cheated on he became a serial dater, so is looking forward to science taking the reigns and finding his perfect match for him.

Jack is 26 years old and owns his own Sales and Lettings Agency in Cardiff, and is a self-confessed workaholic – but he’d love to meet a girl to “shake it out of him!”Despite working evenings and weekends, Jack loves to party and will always try to win over a girl with a round of drinks… he’d choose a Pina Colada over a pint any day!

Jacob is a 27-year-old firefighter from Cambridgeshire who loves to stay fit and loves to play ice hockey and skateboard.Jacob’s tactic with women is to befriend women and finds that calling them ‘mate’ and giving them high fives always works in his favour – and he’s ready to find his best mate in a girlfriend!

Jordan is a 28-year-old scaffolder from Brighton, working in the family business with his dad and brother. He is very family orientated, and after being raised by a single mum describes himself as a ‘gentleman.’Jacob feels like a lot of girls he has been with before want a ‘bad boy’ and make assumptions about him because of his job, but is really an old-fashioned romantic. Girls tend to friendzone him and think he is too nice, so hopes to find a girl to match his energy.

Josh is a 25-year-old singer/songwriter from Monaco who loves his luxury lifestyle. He has lived and studied around the world, and even speaks five languages.Josh rarely spends more than three months in one place and loves to travel at a moment’s notice – while he’s never been able to make long-distance work, he hopes to find a spontaneous girl who can jet off around the world by his side.

Joshy is a 24-year-old barber, DJ and part time model from Birmingham. He describes himself as a ‘show-off’ and loves the attention that his music brings him.He balances his party lifestyle with more relaxing hobbies, including golfing and meditating, and despite his confident exterior he has a big heart, and hopes to find his perfect match who won’t judge him on first impressions.

Juan is a 22-year-old student from Newcastle, who is proud of his Columbian-Latino background that sets him and his friends apart from other guys in his area.With a whacky personality, Juan says he ‘can’t help’ flirting with girls and hasn’t had a relationship for more than a year, but is keen to tame his wandering eyes for the right girl.

Libby is a 24-year-old professional horse rider from Henley-on-Thames and describes herself as a ‘super glam farmer’ and country girl at heart. Her passion for horse stunts has even transferred to the big screen, with her appearing in Dumbo, Maleficent and The Crown.Libby has been unlucky in love, with recent boyfriends all being unfaithful and feels she is overlooked by a lot of guys. She is ready for her knight in shining armour to sweep her off her feet.

Olivia is a 23-year-old club hostess and performer for Gateshead and has previously worked in bars all over the world, including Ibiza and Dubai.Olivia admits that she struggles to flirt with boys and ends up ‘friend zoning’ them due to ‘tomboy’ personality and banter. She’s never had a boyfriend but is hoping that a summer with other singletons will bring her guard down and find someone to put up with her independent personality.

Robyn is a 25-year-old property manager from Surrey, who describes herself as chilled but ‘feisty’ with a heart of gold. A self-confessed girls’ girl, she would much rather dance the night away with her friend then find a guy on a night out. Robyn believes she has a habit of dating ‘toxic’ men who break her heart and finds it difficult to trust guys. She hopes that finding her perfect match will help her settle down and learn to trust again.

Sapphia is a 28-year-old recruitment coordinator from London who ‘never goes unnoticed’ in a room as a self-confessed drama queen who isn’t afraid to laugh at herself.Her mum is her best friend who even set her up on a dating app because she’s desperate for her daughter to meet someone. Sapphia believes she needs someone calmer to balance out her high-energy personality, and hopes that science can step in!

Shae is a 22-year-old marketing student from London, who is a full-on ‘daddy’s girl’ and is looking for a man to live up to him and impress her protective family. Shae is bold and fiesty and isn’t afraid to bring an arrogant guy down a peg – she wants to find a balance between a confident guy who is goofy, up for a laugh, and will treat her like a princess.

Taofiqah is a 25-year-old marketing executive from London who spent a lot of her childhood in the Irish countryside and has lived in over 30 countries in her life! Taofiqah craved the party life of the city and feels like she intimidates men due to her career success. Despite being hurt in part relationships, she is ready to find someone chilled to ‘calm her down’.

Tasha is a 21-year-old model and influencer from Bristol who says that people always misjudge her sweet appearance. She previously entered a series of Miss England pageants which made her very competitive – she’s not afraid to go after what she wants.Tasha loves the thrill and challenge of being with a guy, whether it’s sleuthing their social media accounts or trying to change the bad boy, although she hasn’t been successful just yet. Will her luck change inside the house?

Thea is a 22-year-old dental nurse from Kent who describes herself as a ‘classic Pisces’ – she hurts hard and loves harder. Her weekend job as a ring girl has made her extremely competitive and a lover of attention, in both her professional life and love life.Growing up as an only child with extremely close parents, she is looking or a guy who can shower her in all of the love and attention she needs, and maybe even swap the boxing ring for a diamond one…

Theo is 27-years-old and works at his family-owned funeral directors in London. People are shocked when he explains his job but he enjoys being able to care for others and working with his family. An old-school romantic, Theo has had two long term relationships but they ended after being at different stages in their lives, but is now ready to settle down and fine ‘The One.’

Therese is a 23-year-old health care worker living in County Antrim, which she feels harnesses her passionate and caring nature.Coming from a small Irish town, dating is hard “when your dad knows everyone” and she usually spends her spare time at the pub her family own with the locals. Therese hoping to find someone closer to her own age who can be a best friend she does everything with.

Vic is a 21-year-old project manager living in London who previously worked in surveying, with people always surprised to see her on a construction site.After lots of partying and having never been rejected by a guy she wants, she’s decided to move away from the partying lifestyle and felt it was ‘toxic’, so is hoping to leave the matchmaking to the experts!

In this article:Are You The One?, MTV, Paramount+