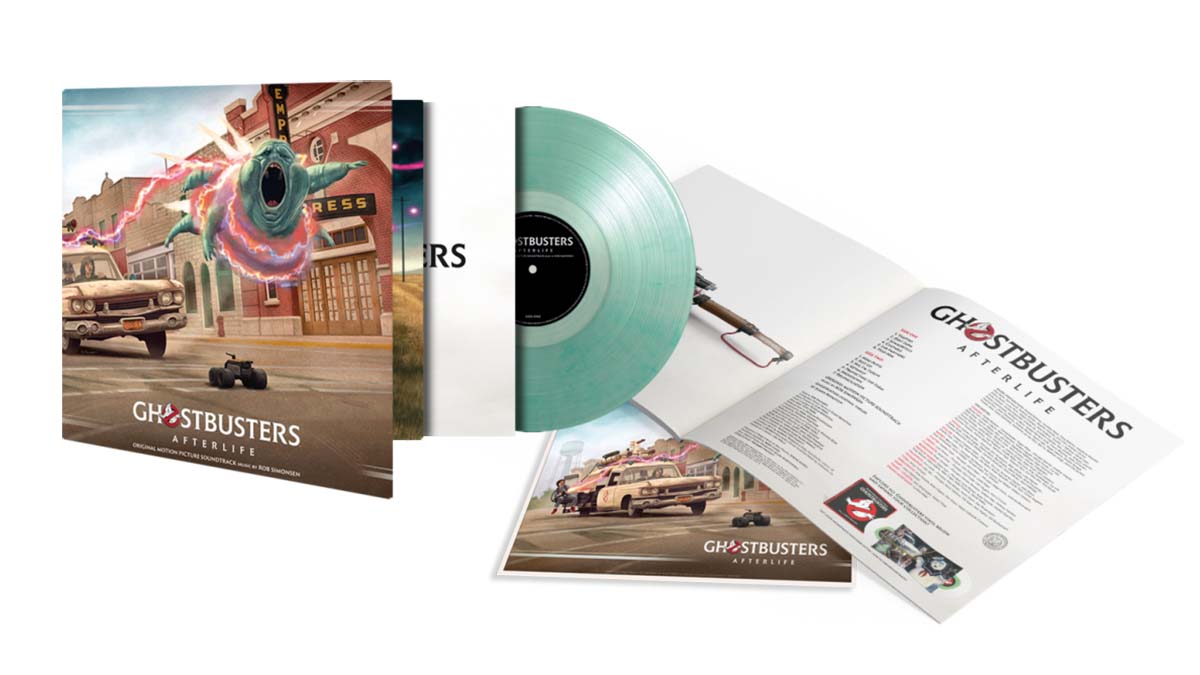 ‘Ghostbusters: Afterlife’ arrived in cinemas in 2021 and it served as a direct sequel to 1989’s ‘Ghostbusters II’, ignoring the poorly received 2016 film directed by Paul Feig. Focusing on the family of Egon Spengler, who was played by the late Harold Ramis in the original two films, ‘Ghostbusters: Afterlife’ saw Egon’s estranged daughter Callie (Carrie Coon) inherit his farm and move her two children – Phoebe (Grace McKenna) and Trevor (Finn Wolfhard) – there. Science geek Phoebe soon figures out that something strange is going on in the town, and before you know it ghosts are causing havoc and it’s up to Phoebe and her family to stop them.

With a sequel on the way, it’s timely that Music On Vinyl is releasing the ‘Ghostbusters: Afterlife’ soundtrack on limited edition vinyl and it’s an absolute beauty. The original physical and digital release featured 25 tracks but this release has curated 13 highlights that give a good overall flavour of Rob Simonsen’s (‘Love, Simon’, ‘Stonewall’, ‘The Way Back’) incredible score. Beautifully packaged with illustrations highlighting key sequences from the film, the gatefold sleeve has a special UV Spot varnish and embossing finish, bringing Phoebe’s proton pack stream to life. The release is pressed on 180 gram and it’s ‘Muncher’ coloured after one of the ghosts from the film. There’s also a lithograph of the cover art included along with a colour three-page booklet and a director’s note from Jason Reitman printed inside the gatefold.

While creating the score, Simonsen studied the original ‘Ghostbusters’ score by the late Elmer Bernstein. He worked alongside Bernstein’s son Peter and also recruited Cynthia Miller, who played the ondes martenot on the original score, to play the same instrument on this score. Conducted by William Ross and Anthony Parnther, the score is one that pays loving homage to the original and it’s a pure nostalgia trip for long-time fans of the ‘Ghostbusters’ franchise. Simonsen has really captured Bernstein’s spirit and that makes this score sound like a natural fit for a ‘Ghostbusters’ movie.

Opening with ‘Trapped’, the score draws you in immediately. Those that have seen the film know that it soundtracks the riveting first five minutes and it packs in plenty of drama and tension. The scene in the film is wonderful, and unsettling, and the score really elevates it. Other highlights on the soundtrack include ‘Mini-Pufts’, which heralds the arrival of the iconic Stay Puft characters in the latest film, the dramatic ‘Suit Up’ which is the moment Phoebe and her pals decide to take action against the ghosts, and the emotive closing track ‘Reconciliation’, which will bring a tear to your eye.

‘Ghostbusters: Afterlife’ is a wonderful score and the Music On Vinyl pressing is another example of why Music On Vinyl is unrivalled when it comes to presentation and wow factor. This release is absolutely stunning and it feels like a premium collectible. From the gorgeous artwork through to the ‘Muncher’ coloured vinyl and the captivating score, this is one of the finest releases from Music On Vinyl yet. Fans of ‘Ghostbusters: Afterlife’ will be racing to pick up a copy and they should as they’ll sell out in no time!

In this article:Ghostbusters, Ghostbusters: Afterlife, Music on Vinyl, Rob Simonsen