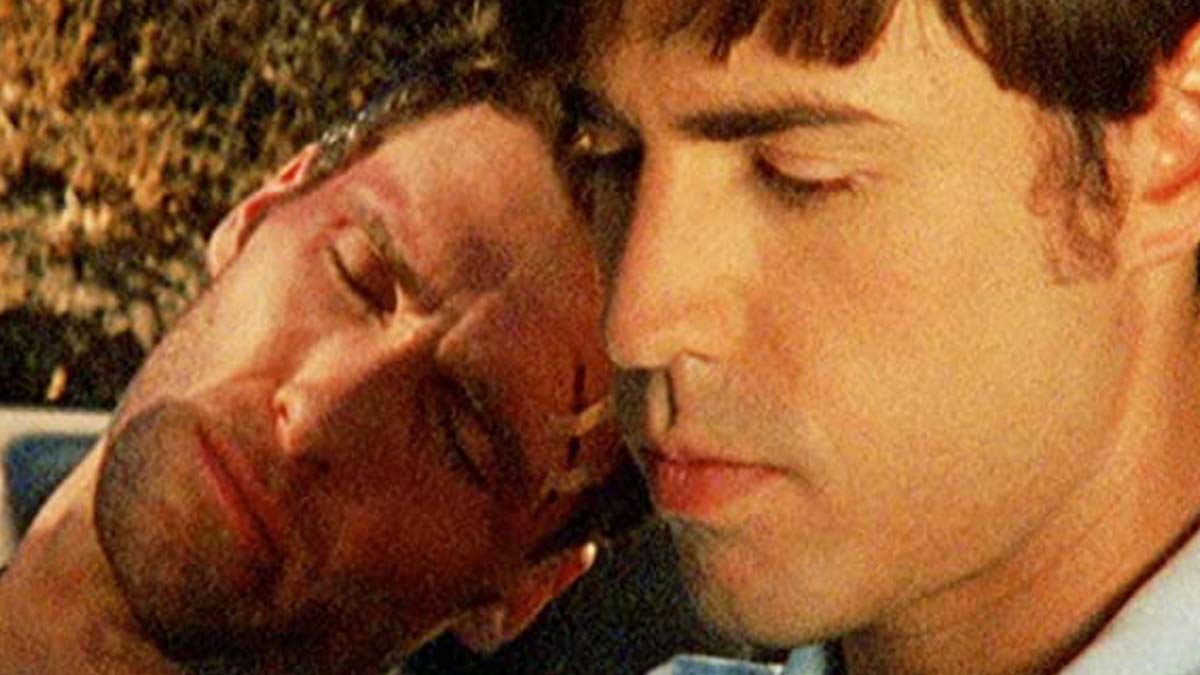 ‘The Male Gaze’ has been one of the strongest strands to come from NQV Media and for the latest instalment in the franchise, things are a little bit different. Rather than pooling together themed shorts from recent years, ‘The Male Gaze: Celluloid Dreams’ is taking a timely look back at shorts made from 1985 through to the present day. The seven short films included here were all shot on 35mm and 16mm film, and it’s a fascinating look at how the stories of gay men haven’t changed all that much despite laws changing and the attitudes of society evolving.

‘The Male Gaze: Celluloid Dreams’ opens with the 4-minute short ‘Just Out of Reach’ by Jonathan Wald. Despite its short run-time, ‘Just Out of Reach’ packs quite the punch as a young man climbs out of bed following a sexual liaison with an older man and tries to sneak out. Barely any dialogue is spoken between them but once it is, a whole new context is given and it proved to be, for my anyway, a little bit of a surprise. Second short ‘Toto Forever’ by Roberto F. Canuto is a very different beast and it explores a doomed affair between a young postman and a gangster. You know from the start things aren’t going to end well but over the 14 minutes, a more complex story than you might expect unravels and it’s one of the highlights here.

The hardest hitting of the shorts comes from Kyriakos Chatzimichailidis with his effort ‘Men Don’t Cry’. A young man turns up on the doorstep of an older man behaving erratically. As the two men begin to talk, it becomes clear that they have met before and that the younger man has a rather important secret to share. It’s a tense two-hander filled with hazy flashbacks and a building sense of tragedy. By contrast Cyril Collard’s ‘Alger la blanche’ explores forbidden love in Paris between Algerian teenager Farid and illustrator Jean. The young lovers have to battle against society and a criminal underworld, both of which threaten to pull them apart.

‘Unconfessions’ is a look-back through the life of Luiz Robert Galizia by his niece Ana Galiza, painting a picture of a man she never met and giving her a deeper understanding of who he was, while ‘Same Difference’ by Harry Richards explores how twin brothers can be incredibly in sync while still not knowing everything about each other. The collection comes to a close with ‘Boychick’ from Glenn Gaylord, which is the most humorous short here as it tells the story of a young shy gay boy who is obsessed with a Britney Spears like popstar and his hunky classmate. This one did make me laugh and it perfectly captures the nervous feelings teenagers have when trying to get their crush to notice them.

‘The Male Gaze: Celluloid Dreams’ is a welcome switch in gears for the series and it’s an important reminder of the shorts that came before those included on previous volumes. Seeing what the world was like for gay men through the ages is fascinating and the stories told here are as relevant now as they were then. ‘The Male Gaze’ continues to be NQV Media’s best strand and I look forward to what it brings next.