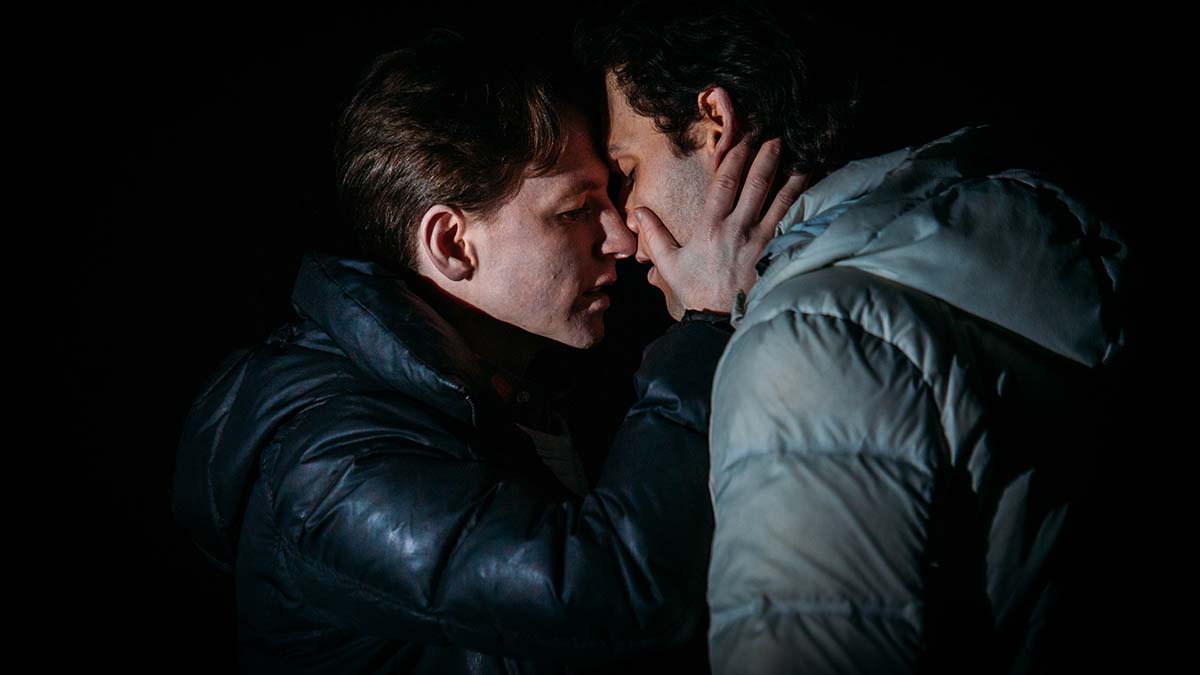 Peter (Harrison Browne) is bullied at school by Miles (Mikael Milo) for his sexuality and constantly put down by his father Nathan (Andrew Bee) at home for not being ‘man enough’. Desperate to be his authentic self, Peter is forced to go on a hunting trip with his father and he reaches breaking point. At that pivotal moment he meets Jack (Cameron Stewart), a loner whose abusive father has turned to drink after the death of his wife. Peter and Jack form a close bond quickly, which turns into a romance, as they hide away in a cabin and try to escape their realities.

‘On The Fringe Of Wild’ is the directorial debut of Emma Catalfamo and it’s billed as a modern day ‘Romeo & Juliet’. I’m not sure that description is completely accurate but the story is one of forbidden love, even if the two families on either side aren’t at war with one another. What the film is really about is three young men – Peter, Miles and Jack – who are unable to be themselves due to the way their families treat them and the pressure from their peers.

Peter has support from his mother but his father is determined to ‘make him into a man’ by forcing him to do ‘manly’ things such as shooting innocent rabbits. Miles is secretly having to look after his drug addicted mother while maintaining a fake relationship with a girl at school and bullying others to hide his own sexuality. Jack lives alone with his father following the death of his mother and has suffered physical abuse due to his sexuality. All three boys’ stories cross over with Miles bullying Peter and having a secret relationship with Jack, and he’s then unable to cope when Peter and Jack find kindred spirits in one another and he is cast aside.

‘On The Fringe Of Wild’ deals with some very serious issues but sadly it never truly gets under the skin of its subject matter. The film touches upon suicide, drug addiction, sexuality and bullying, but it never really finds a strong way to explore them. Instead, each of the topics is touched upon and added to the story in a very surface level way. Another issue the film has is there’s no light in there. Each one of these boys is from abusive homes and with the exception of Peter’s mother, there’s no suggestion that their sexuality is normal. That makes the film feel more dated than it should and a more rounded perspective would have benefited the overall story.

Cameron Stewart is the standout as the troubled Jack, proving to be the strongest actor able to give the most nuanced performance. Harrison Browne is solid enough as Peter but he could have let himself go into his performance a little more as it’s a bit stilted here and there. Mikael Melo plays Miles with relish but that relish sometimes veers into pantomime villain, which is a shame. He does get to show he can handle the weightier parts of the story later on in the film though.

‘On The Fringe Of Wild’ is a compelling enough film despite its flaws and it does try to pack an awful lot into its 83 minutes. For me, I would have liked the three main characters to have had different experiences because their storylines do blur together and for the first half an hour, I actually struggled to tell them apart. Catalfamo’s direction utilises the bleak settings well to emphasise the battles the boys are facing but Sorelle Doucet’s script is a little too underbaked for the film to truly hit all of its marks.