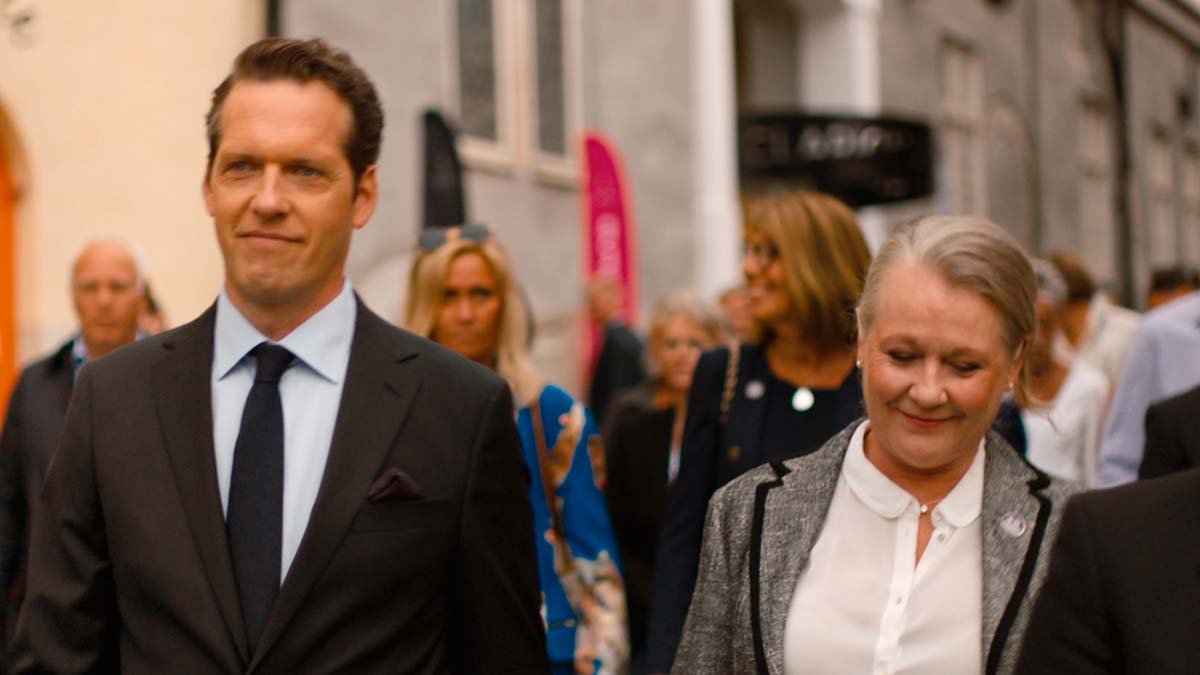 Last week, Walter and co introduced to one of the finest Nordic thrillers of recent years – ‘When The Dust Settles’ – which follows the lead up to a terrorist attack in Copenhagen. Not to be outdone, Denmark’s neighbours, Sweden, have now delivered an equally intriguing thriller of their own to the WP stable – the political thriller, ‘The Inner Circle’.

If you want to avoid all spoilers for the show, stop reading this article now.

It’s an often-used tool in dramas these days to start with a major incident which is clearly the culmination of a series of previous events – and then the storyline jumps back in time to explain what has lead up to this incident. They use it to fine effect in ‘When The Dust Settles’, and it’s used here, too. We see a clearly distressed man leaving the Clarion Hotel Wisby in the Swedish town of Visby. He walks down to the sea-front, pursued at a distance by various on-lookers. He walks purposefully down a boardwalk and dives – fully-clothed – into the sea, whilst people gawp in bewilderment.

That man, we later learn, is David Ehrling (played by Niklas Engdahl, who you may recognise from ‘Rebecka Martinsson: Arctic Murders’), Minister for Enterprise and Innovation in the Swedish government. He is, on the face of it, a respectable married family man. We see him with his extended family enjoying a bit of rare time together at their summer house, when he receives an unexpected phone call from the Prime Minister, asking him to join her for an urgent press conference the following day.

David leaves the holiday cottage (after some family in-fighting with his brother and kids) and meets up with his aide, Lena (Nanna Blondell). They head to the city where – David believes – he will be asked to prepare to become the next Prime Minister.

But fate intervenes and David foolishly ends up going to a nightclub where a much younger woman pursues him. David doesn’t want to do anything stupid on the eve of his big day, so he leaves early and goes back to his hotel alone. But the woman is persistent and follows him. When she knocks on the door of his hotel room, both their lives take a very serious turn for the worse.

Meanwhile, news of David’s summons to a press conference with the PM has the journalists speculating – including the newly appointed award-winning reporter, Josephine Sparre (Ebba Hultkvist Strange). She’s finished work for the night and is heading home, when she receives an anonymous picture on her phone of David in the nightclub. So she goes there to check it out for herself.

This series is adapted from Per Schlingmann’s book, ‘I Maktens Oga’, and once again the fully developed characterization and compelling storyline that comes from having a pre-existing novel to draw from, makes for great viewing.

It’s early days for both ‘The Inner Circle’ and ‘When The Dust Settles’, but both new Walter Presents series are a cut above the majority of crime drama out there.

The traditional Nordic Noir genre has been relatively quiet of late, but these two prove that there’s plenty more Scandinavian drama out there to enjoy.

Walter Presents: ‘The Inner Circle’ is available to watch as a boxset on All 4 now.