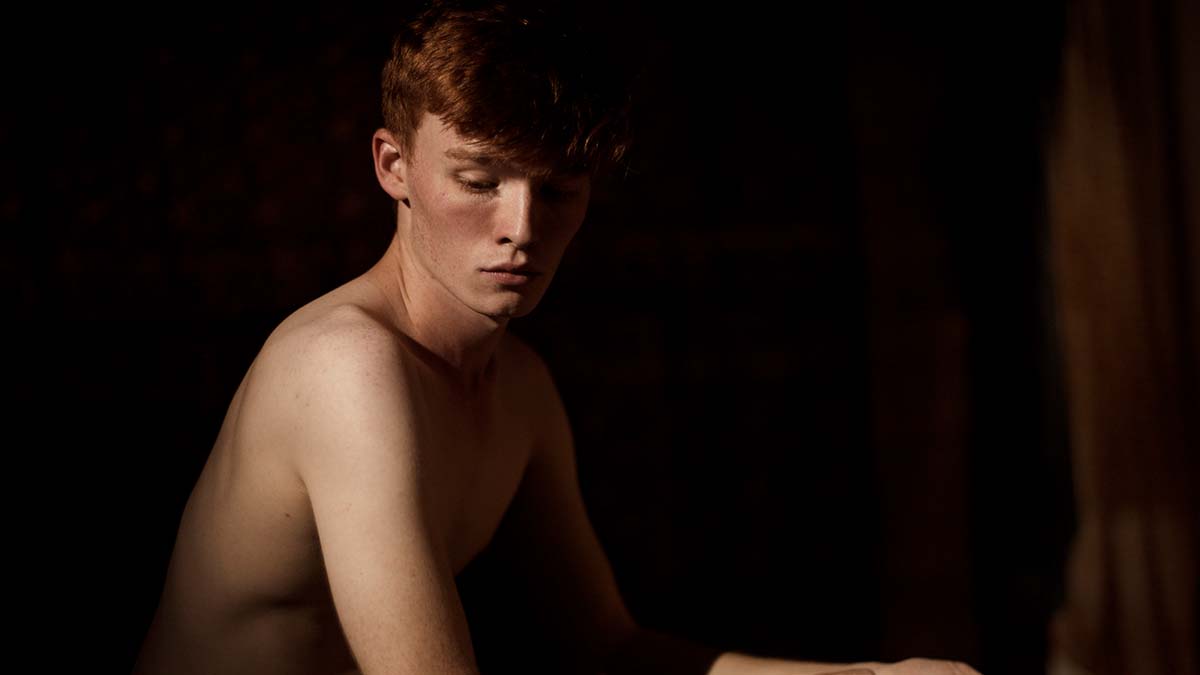 16-year-old schoolboy Sequin (Conor Leach) spends his days surfing hook-up apps to connect with older men for casual sex. Setting his own rules, Sequin vows never to meet the same man twice, blocking each one after their first sexual encounter. Adding a couple of years onto his age, Sequin gets himself invited to the mysterious Blue Room, an anonymous sex party where he is able to live out his fantasies and further explore his sexuality. During his first time there, Sequin is pursued by older married man B (Ed Wightman) that he’s hooked up with but after shaking him off, he encounters a slightly older man (Samuel Barrie) that he becomes infatuated with. Determined to find out the identity of his latest sexual partner, Sequin is plunged into a spiralling situation that he struggles to control.

‘Sequin in a Blue Room’ is the first feature from Australian film-maker Samuel Van Grinsven. Originally Van Grinsven’s graduate film from his time at the Australian Film, Television and Radio School, ‘Sequin in a Blue Room’ puts a refreshing spin on the coming-of-age trope that dominates LGBT+ cinema. Sequin, the name that the central character uses on an anonymous hook-up app, isn’t coming to terms with his sexuality as he’s already comfortable with it. Instead, Sequin is looking for the constant thrill of casual sex with strangers while ignoring the keen interest of his classmate Tommy (Simon Croker), who is a gibbering wreck around him.

Once Sequin attends the Blue Room for the first time, there’s a tonal shift in the film as it moves from drama to thriller. While the central plot is Sequin’s attempt to find out who the man is that he’s become infatuated with, menace bubbles under the surface as Sequin breaks his own rules to meet B again. Hoping to find out who the man of his obsession is through B, Sequin opens himself up to a dangerous relationship made even more so when Sequin snatches B’s phone. As B attempts to retrieve his phone, and keep his relationship with Sequin a secret from his wife, the situation escalates putting Sequin is serious danger.

By all accounts ‘Sequin in a Blue Room’ is a forward-thinking gay film. While it does highlight the dangerous side of hook-up apps, it refuses to offer judgement about those who use them. It also portrays Sequin’s relationship with his father (Jeremy Lindsay Taylor) in an interesting way. The two clearly don’t really talk to one another but Sequin’s father is somewhat aware of what his son gets up to and is comfortable with his sexuality. Van Grinsven depicts Sequin’s dad as someone who allows his son room to be who he is but perhaps doesn’t necessarily understand the importance of boundaries.

Conor Leach’s central performance is the hook here. Sequin isn’t particularly a likeable character but Leach is magnetic to watch. He exudes a confidence much older than his years, and Leach gives a nuanced performance that sees Sequin go from confident to terrified as he pushes on with his quest regardless of the dangers. Ed Wightman is also worthy of a mention. As B he goes on a journey that becomes more and more desperate as the film continues, and as the film hurtles towards inevitable violence, he really brings the character’s struggle to keep his secret to the surface.

‘Sequin in a Blue Room’ is definitely a breath of fresh air in the genre. While the film may about sex, you don’t actually get to see all that much of it so if nudity and cheap thrills are your bag, this isn’t going to do it for you. ‘Sequin in a Blue Room’ is a drama-thriller hybrid that gives an insight into the reality of the world for young gay men who are reliant on hook-up apps. Samuel Van Grinsven shows plenty of promise and it’s going to be exciting to see what he comes up with next.