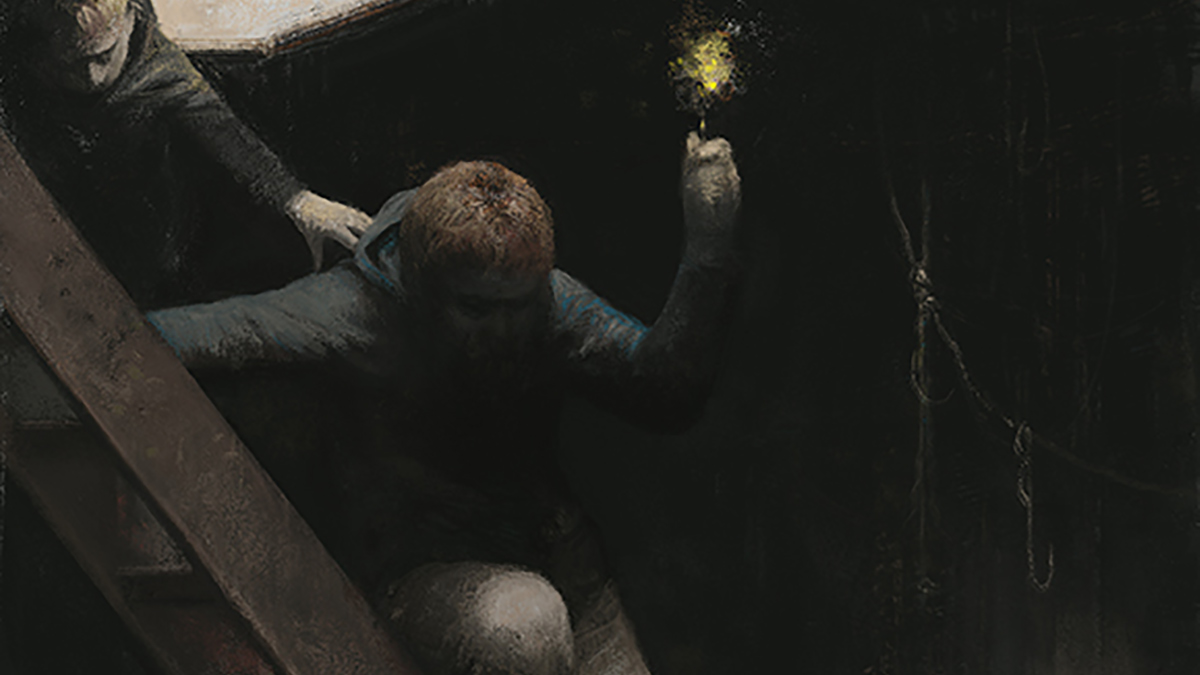 Illustration © Gérard DuBois 2021 from The Folio Society edition of The Road.

A father and his young son travel relentlessly south, looking to stay alive and escape the cold. All of their worldly belongings are stored inside a shopping cart. Overhead, the sun never appears from behind ash clouds to warm up the earth. The father wheezes from years of breathing bad air. They see few people, crossing a broken and derelict post-apocalyptic landscape, but survivors they encounter are likely to be desperate for food, and therefore a danger to them. The quest to survive drives people to savagery. What’s left of the human race after the collapse of civilisation cannot be trusted. They are safer alone. The father must protect his son and give him some hope for their future.

Cormac McCarthy’s uncompromisingly bleak novel ‘The Road’ is a compelling work of speculative fiction first published in 2006 to instant commercial and critical acclaim. A film adaptation soon followed, as did a glut of literary awards for the author, not least the Pulitzer Prize. In the decade and a half since its publication it remains embedded in the public consciousness, and has now been selected for release as part of The Folio Society’s catalogue after popular demand from their readers. This luxury hardback edition comes with an afterword by American writer Michael Chabon and vivid full-colour illustrations that capture the isolation of the story by Gerard Dubois.

‘The Road’ departs from many literary conventions, but all are in the service of telling a strong tale. There are no speech marks. Dialogue bleeds into prose. There are no chapters, just relentless text, mirroring the arduous journey the travellers take. We never learn the father and son’s names. Yet we grow to love them through McCarthy’s masterful writing. The author draws in and keeps readers hooked both with suspense – fearing what may happen next to threaten the protagonists’ fragile existence – and compassion for the tenderly-depicted bond between father and son. In one grizzly scene that it is best not to read immediately before going to sleep (as I found out the hard way), they stumble across a house and, in their quest for food, unwittingly uncover the secrets lying in the cellar. McCarthy’s economic yet graphic descriptions leave a harrowing imprint in the mind. It is established that the father will help his son to survive come what may – except when his survival would lead to a fate worse than death. What kind of world gone wrong is this? How can a child hope to survive?

A word of warning must go to those who like their authors to explain every strand of the story: ‘The Road’ does nothing of the sort. You are meant to be as disorientated as the nameless boy and his father as they trek wearily through a scorched land. There is little by way of life – a dog briefly appears, and then is gone. There is another child, too, but readers must discover him for themselves. No birds fly overhead. Every day is the same: they must keep moving, defend what little they have, and find more food. The repetitiveness of this routine is an insight into the mundanity of staying alive once civilisation has collapsed. If the book was twice its length, or longer than a relatively short read (the main text in this edition runs to 171 pages) it may well wear out the reader. McCarthy’s deliberate economy allows the special moments that punctuate the commonplace, such as finding shelter and sleeping in a bed, lighting a flare or going for a swim in the freezing cold ocean, to resonate even louder. The rare moments of tenderness are precious. If there is a moral, it’s perhaps that we must always find time to give hope and moments of levity to those we love, especially children. We must keep going, somehow.

Any readers who enjoy post-apocalyptic fiction (though I feel ‘The Road’ is more speculative fiction than outright science-fiction), such as John Wyndham’s ‘The Day of the Triffids’, or Neville Shute’s ‘On the Beach’, will love ‘The Road’. What affords McCarthy’s work more literary merit is that the characters take precedence over the plot. They drive the narrative and hold our interest. The story itself is weighted with allegory. It is not a work for those who like clever plots about end times: its focus is on human survival.

We strongly recommend visiting this book. Once you’ve read ‘The Road’, you never forget it. The fates of the characters will haunt you forevermore. Despite its grimness, it is a story that calls readers back, too, and its hidden subtleties reward subsequent visits. This Folio Society edition of a modern masterpiece is a great addition to any bookcase, and the eye-catching red sky and scorched ground of the cover art is a brilliantly eye-catching design. There’s never been a better reason to join the father and son on their journey.

The Folio Society edition of The Road by Cormac McCarthy, afterword by Michael Chabon and Illustrated by Gérard DuBois, is available exclusively from www.foliosociety.com.

In this article:Cormac McCarthy, Featured, The Folio Society, The Road