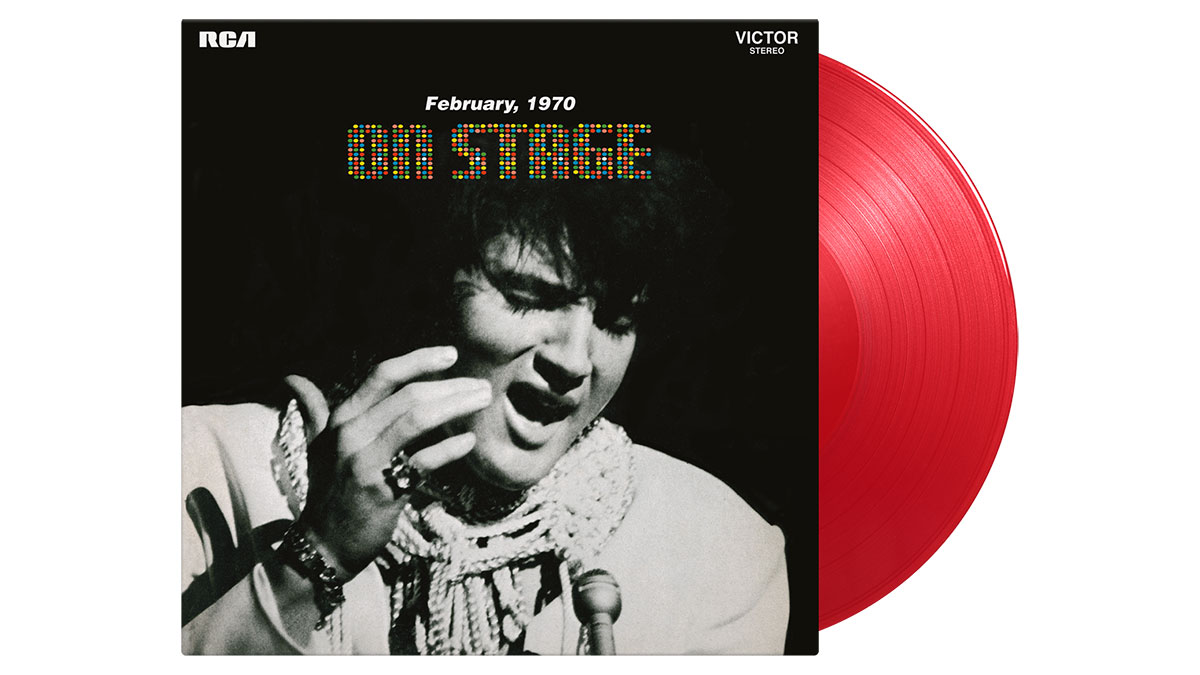 ‘On Stage’ is a new vinyl release capturing Elvis Presley’s live performances at the International Hotel in Las Vegas in 1969 -1970. The follow-up to ‘From Memphis to Vegas/From Vegas to Memphis’, ‘On Stage’ was originally released in June 1970 through RCA and it has sold more than 10 million copies across the globe. ‘On Stage’ features Presley singing songs, which at the time, were not associated with him and this vinyl release features the 10 tracks that appeared on the original version.

The album opens with ‘See See Rider’, a popular blues and jazz standard, that became a staple of Presley’s live sets. The song is completely in Presley’s wheelhouse and with his distinctive deep tone tackling the melody, it sounds truly fantastic. ‘Release Me’, a song that has been released by a number of artists over the years, sounds powerful and gritty in the hands of Presley. You can really hear the grit when he pushes his voice during the more challenging notes, and he sounds fantastic.

The most notable song on this collection is ‘The Wonder of You’, originally recorded but never released by Vince Edwards in 1958. For Presley, the song became a worldwide number one hit and in the UK it was one of his most successful singles ever, spending six weeks at number one.

Elsewhere on the album Presley transforms The Beatles’ ‘Yesterday’ into a soulful ballad, stays true to the original Creedence Clearwater Revival classic ‘Proud Mary’, and puts his own stamp on Neil Diamond’s iconic ‘Sweet Caroline’. Even though you’re familiar with the originals, you can imagine all of these songs being Presley originals. The album closer is a gorgeous version of Gilbert Bécaud’s ‘Let It Be Me’, which was popularised in English by The Everly Brothers in 1959. It’s a fitting end to an album that may only run for 32 minutes but is hugely enjoyable.

Perhaps what’s most striking about ‘On Stage’ is that it’s incredible to think this was recorded live. The quality of Presley’s vocal is so impressive that were it not for the audience sounds throughout, you’d be forgiven for thinking you were listening to studio recordings. Presley truly was one of the world’s best performers and that shines through here. Few artists can tackle songs from other artists and make them sound like their own, but Presley does it across ‘On Stage’ with ease.

This vinyl release from Music On Vinyl is pressed on transparent red vinyl and limited to 2,500 individually numbered copies. The release features the original artwork and includes a poster of Elvis too, which is a nice bonus. The innersleeve features the covers and information about the numerous albums and soundtracks Presley released during his time with RCA/Victor.

‘On Stage’ is always worthy of a revisit but this vinyl release from Music On Vinyl is the definitive version in terms of its sound and quality. These songs have never sounded better (apart from if you were at the live performance of course) than they do on 180-gram vinyl. There’s a rich sound and depth across all 10 tracks, and it’s the closest you’ll get to feeling like you’re seeing The King live.