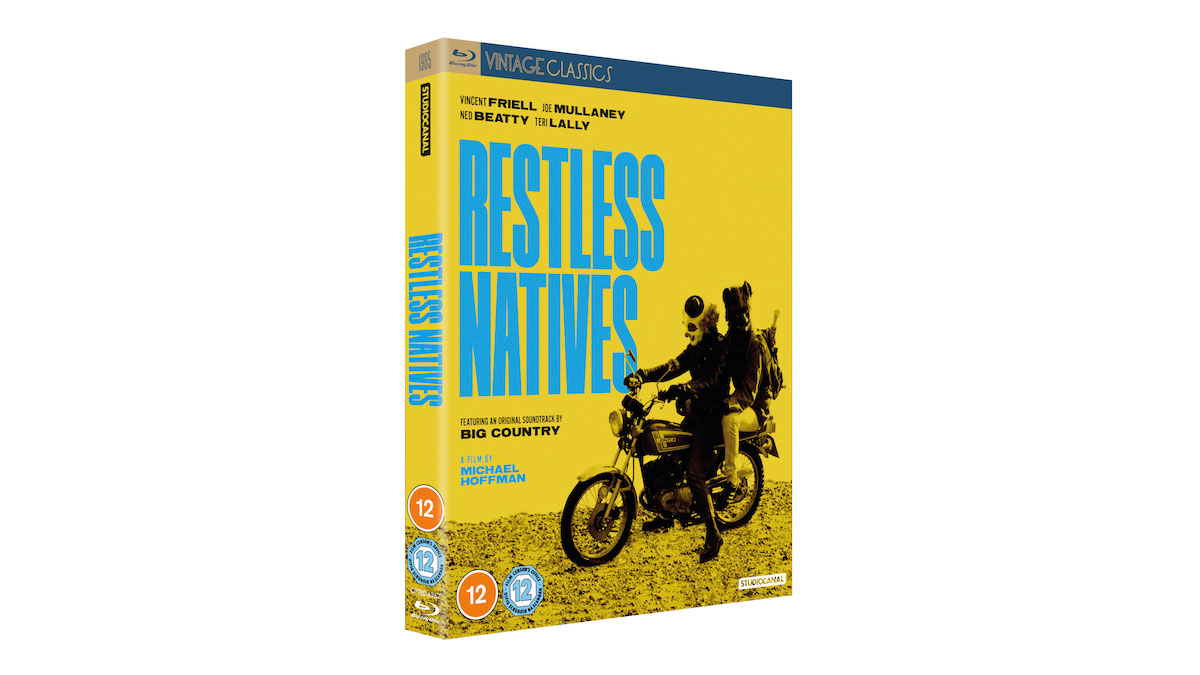 STUDIOCANAL are delighted to announce the upcoming release of a brand-new restoration of the 80s comedy gem ‘Restless Natives’, available on Blu-ray, DVD and Digital from 1st March 2021.

Starring Vincent Friell (Will) and Joe Mullaney (Ronnie) and directed by Michael Hoffman (‘The Last Station’, ‘One Fine Day’) from a script by Ninian Dunnett this much-loved film from 1985 comes with additional features including a new documentary with cast and crew.

Ronnie and Will are two under-employed Scots living on a housing estate in Edinburgh. Bored and tempted by the untapped wealth of the international tourists that swarm through the city, they hatch a wildly irresponsible plan to achieve wealth and notoriety. Donning a wolf and a clown mask and armed with a puffer gun loaded with homemade mace they politely hold up coachloads of tourists travelling through the Highlands for a bit of cash. The duo soon become a hit with the tourists and the public alike, following in the great tradition of fellow folk heroes Robin Hood and Rob Roy. Their exploits make them a bigger tourist attraction than the Loch Ness Monster, much to the annoyance of the inept local police.

Ned Beatty (‘Network’) also stars as a vacationing CIA Agent Fritz Bender who joins the pursuit of the outlaws, with Bernard Hill (‘The Lord of the Rings: The Return of the King’) as Will’s dad and Mel Smith (‘The Princess Bride’) as a schmoozing gangster who wants to cash in on their fame.

‘Restless Natives’ is available to buy on Blu-ray, DVD and Digital from 1st March 2021 and available to pre-order here.

Included with the film:

‘Restless Natives’ is released as part of the ‘Vintage Classics Collection’ which showcases iconic British films, all fully restored and featuring brand new extra content. The collection includes ‘Kind Hearts & Coronets’, ‘The Dam Busters’, ‘Don’t Look Now’, ‘The Ladykillers’, ‘Far From the Madding Crowd’, ‘The Wicker Man’, ‘The Man Who Fell to Earth’ and many more.