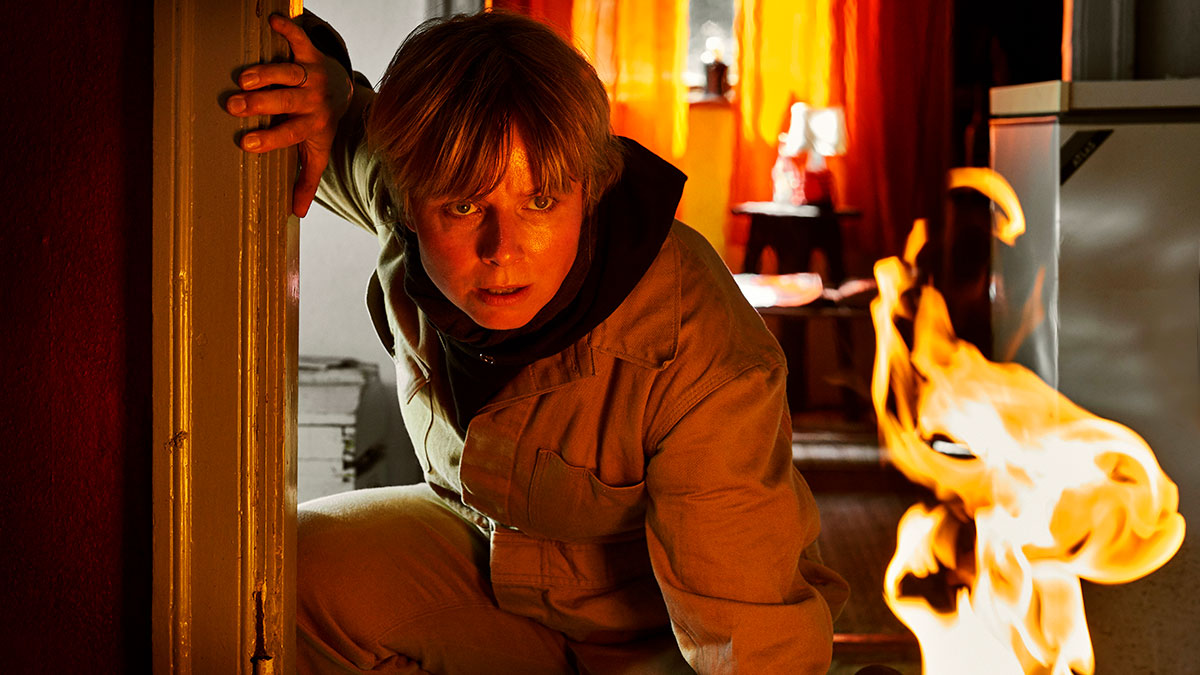 There have been quite a few Walter Presents shows lately that feature weird, inhospitable towns and villages in Scandinavia – and now you can add the unnamed location for this Danish thriller, ‘Deliver Us’ (‘Fred til Lands’ in Danish) to that list. You do feel for the Danish Tourism Board – it must be hard enough to drum up tourism in the current pandemic, but no-one is going to want to visit rural Denmark after seeing this show.

The town is being tormented by one man – the innocuously named Mike. He seems to be single-handedly causing all sorts of mayhem for the inhabitants of this town by means of blackmail, physical violence, vandalism, animal cruelty and harassment. There are probably more black marks against his name, but that’s just the first episode.

But the biggest black mark of all is that Mike is accused of killing a teenage boy in a hit and run incident. But it’s an accusation that doesn’t stick and he’s still free to strike fear into the hearts of the locals; something that doesn’t sit well with the dead boy’s father, Peter (Claus Riis Østergaard who has been in Norskov and Dicte: Crime Reporter previously). Peter is visited by his author brother, Martin (Anders Juul), a man with money issues and a dubious moral compass. He’s in town to do a book promotion, but he ends up staying supposedly because he is concerned about his brother’s well-being. I suspect he has other motives.

Elsewhere we meet other victims of Mike’s bad boy antics, such as Bibi and Tom. They run the local bar, but they are having marital issues of their own. When Mike shows up at their premises, Tom is bullied and threatened into serving him and his mates, despite the presence of the one police officer in town (who rather cowardly drives off to leave him to it). And when it comes to closing time, and there’s only Mike and Tom’s wife, Bibi, in the bar, they end up having sex on the pool table. But was Bibi forced or a willing participant?

We also meet Anna and John. Their son Kasper is a troubled teenager who sees chickens – yes, chickens – in his hallucinations. He is under Mike’s influence too, although his parents try (unsuccessfully) to keep the two apart. Kasper was with Mike when the car accident occurred.

The by-line to this show is “once you start playing God, it’s easy to end up being the devil”. In other words, if you take the law into your own hands, aren’t you just as guilty as the one you punish? It’s a nice idea, but I must confess to not being entirely convinced by this thriller. Mike is just one man – yes, he’s a nasty piece of work; but the fear and panic he strikes into virtually all the town’s inhabitants seems disproportionate. Be warned – the bullying incidents are quite unpleasant to watch and involve some scenes showing physical abuse. It’s not over-the-top, but it is something to consider.

It’s well acted with a strong cast (special mention to Dar Salim, who plays John’s boss, Malid – who was Qotho in ‘Game Of Thrones’, as well as playing major roles in ‘Borgen’, ‘Dicte: Crime Reporter’ and ‘Trapped’). But the whole thing just lacks sufficient believability to make it a winner, for me.

Walter Presents: ‘Deliver Us’ premieres on Channel 4 on 7th February at 11pm. The entire box set is available on Walter Presents via All 4 now.

Advertisement. Scroll to continue reading.
In this article:Deliver Us, Featured, Walter Presents