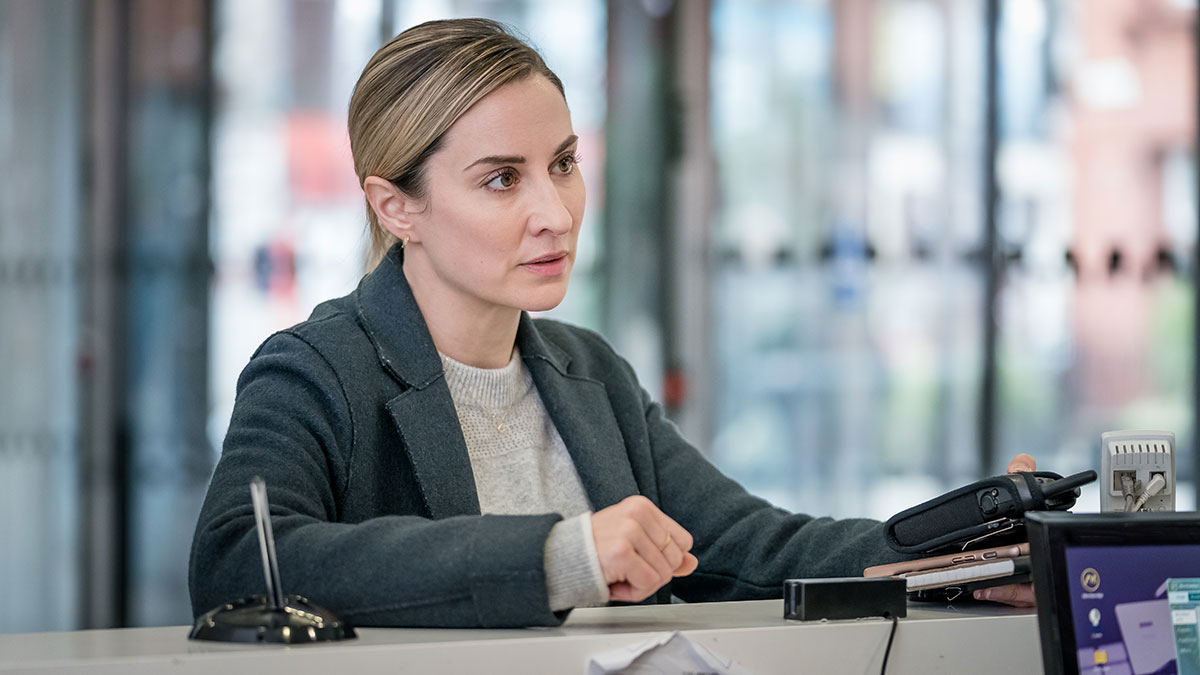 Lisa (Morven Christie) had to contend with the unwanted return of her ex and a new suspect in the murder investigation on tonight’s episode of ‘The Bay’.

Lisa was at the receiving end of some serious anger from Rob (Art Parkinson) who was unhappy that she had reacted badly to the unexpected visit from her ex Andy (Joe Absolom). She told Abbie (Imogen King) not to speak to her father and asked both kids not to tell their grandmother.

At the police stations Lisa and Med (Taheen Modak) interviewed Oliver (Leo Ashton) again with Rose (Sharon Small) by his side. Oliver gave a description of the man who shot his father and asked Lisa if she’d found ‘the boy on the bike’. When Lisa asked what he meant, Oliver revealed there was a boy on a bike outside his house when the murder took place.

Tony briefed the team and told them that it looked like a professional hit. He also revealed that Med and Lisa had found out some important information from Oliver and Med gave the credit to Lisa. Tony asked Med to go to the law firm to get access to Stephen’s (Stephen Tompkinson) files.

Bill (James Cosmo) lost his temper with Mark (Steven Robertson) and Stella (Sunetra Sarker) when he couldn’t find his keys and told them he wasn’t going to work. After they left, it was revealed that Mark had purposely hidden the keys from his father.

Rob tried to convince Abbie to give their father a chance and she tried to dismiss him. Abbie was adamant that Rob didn’t really know their father and she told him some home truths about the way he’d treated them when they were children. Rob suggested Andy could have changed but Abbie insisted that people don’t change and their father wouldn’t stay around. As Abbie walked off, Rob was approached by Claire (Ciara Adams) the girl in his class he had a crush on who asked him to tell her his problems.

Med hit a brick wall at the law firm with Mark who refused to give him access to the files. As they were talking Med clocked that Lyn (Wendy Kweh) looked uncomfortable.

Not able to find any information about the boy on the bike, Lisa and Med went to the crime scene to investigate further. They found a ginnel and Lisa called DS Alexander Stewart (Simon Mayonda) to share the information.

During class, Abbie googled her father to see what information she could find out about him. She found his roofing company website.

Thanks to Lisa and Med’s find, they were able to find the boy on the bike, watching his route after the murder. Lisa noticed that the boy was carrying something when he left the ginnel that he didn’t have before he entered it and that it appeared he’d got rid of it shortly after.

Lyn turned up unannounced at the station to see Lisa and Med. As she entered the interview room, she started to lose her confidence. She asked if their conversation was confidential and then handed over a client list on a USB stick. Lisa took the USB stick to Tony and told him they couldn’t use it as it would be inadmissible. Tony took it from her and plugged it into his own computer to see what was on there. Looking through the client list, Lisa noticed that her late father wasn’t on the list meaning it wasn’t a complete list. Tony sent them back to the law firm to do some more digging.

As Lisa and Med left the station, Andy turned up. An angry Lisa approached him and told him to leave. He asked to talk to her and she angrily told him that after years of disappearing and being absent, he shouldn’t expect to walk back into her life. Med asked if everything was OK and Lisa explained who he was.

Back at the law firm, Mark let Lisa and Med into Stephen’s office so they could go through his personal items. Mark watched nervously as Med started to bag things up and Lisa excused herself to go to the toilet, which was a ruse to catch Lyn’s attention. Lyn explained that Bill keeps his own records of his clients, which might be why the list she had wasn’t complete.

While search around Stephen’s home, DS James Clarke (Andrew Bowbiggin) was alerted to a suspicious package, which turned out to be a gun. That was enough for Tony to declare the boy on the bike a person of interest.

Rob was approached by Andy as he left school and agreed to speak to him. Andy offered to give him a lift. Rob asked why Andy had returned and Andy insisted he didn’t want to miss any more of their lives. As Rob tried to apologise for his mum and sister, Andy asked if Rob wanted to grab some chips. They were spotted in the van by Penny (Lindsey Coulson).

At the station DS Karen Hobson (Erin Shanagher) told Tony that the fingerprints on the package the gun was in brought up a girl, not a boy, on the system. They visited the girl’s home to find she wasn’t in but her foster parents told them how she’d turned her life around since she’d lived with them.

On her drive home, Lisa spotted Rob and Andy eating chips on the sea front. Rob was opening up to his father about Claire and they were interrupted by Lisa. At first Rob refused but when Lisa insisted, he did as he was told. Lisa tried to find out what they’d been talking about and it turned heated quickly. Rob got upset as he climbed into the car.

Med visited Bill to ask for his files and Bill gave him access to a locked room where he kept paper copies of all of his files. There were notes all over the room, which Bill said were put there by Mark and Stella, reminding him of what was where.

Oliver continued to be questioned at the police station as Rose spoke to Lisa of her concern that he wouldn’t get over seeing what happened to his father. Rose started to talk about how Stephen spent most of his life working and when Stella arrived at the station, Rose went back into the interview room. Stella made a comment about Rose having been through a lot and she said Stephen wasn’t the easiest person to live with before suggesting Lisa would have been his type.

During a briefing, Med told Tony he’d started looking through Bill’s files. Lisa pointed out that there were inconsistencies about Stephen’s actions and she mentioned that he may have been having an affair. In Stephen’s belongings they found a keycard for a local gym and pool. Lisa went to the gym and the receptionist told her the card hadn’t been used for ages, even though Stephen’s diary suggested he’d been there a week prior.

Abbie was surprised at work by Andy who was sat at a table. Abbie asked what he wanted and Andy tried to joke with her. He told her that he’d spoken with Rob but Abbie wasn’t having any of it. Abbie asked why Andy had never tried to contact them or make an effort, and he replied that Lisa had told him to stay out of their lives. That shook Abbie who was still processing the information when Andy left.

Lisa returned home where she found Penny in the living room with Rob.  She made small talk with her mother as Penny asked a series of pointed questions.

Tony was about to take a nap in his office when Karen disturbed him to tell him the girl on the bike aka Cassie (Kelcie Atkinson) had returned home. They rushed over to her house and Cassie took off on her bike. The police cornered her in an alley and grabbed her as she tried to scale a gate.

With Cass in custody, Tony and Karen questioned her and Cass became foul-mouthed and agitated. They pressed her about the photo and Cass aggressively told them they couldn’t put her in prison.

Abbie arrived home in a mood and gave Lisa the cold shoulder. When Lisa asked if she was OK, Abbie brought up what Andy had told her before storming off.

Back at the station, Cass was shown to a cell and told she’d be staying there for the night. She tried to call their bluff and they closed her in. The next day Tony shared his theory with Cass that she panicked and tried to discard the gun. Cass remained silent and stared at the floor as Tony listed the charges she could face. She still refused to say anything, insisting she wasn’t scared.

Tony briefed the team and said Cass knew a lot more than she was letting on. Stew revealed he’d found a large payment to someone that they needed to locate and Lisa shared that Stephen hadn’t been going to the gym like he said he had.

Penny visited Abbie at work and she was met with a twitchy granddaughter who tried to get her to leave. As she pressed, Penny was told by Abbie that she wasn’t supposed to tell her what’s going on.

Lisa chatted to Rose about her relationship with Stephen. Rose asked why Lisa was asking her personal questions and Lisa shared some information about her own life. Rose’s response suggested that things weren’t as hunky dory with Stephen as she’d been making out. Lisa then called Andy and they met to talk.

As she asked Andy why he’d returned, he told her that his mother had died. Andy told Lisa he had a right to see his kids but Lisa argued with him, pointing out that she’d raised them on her own. It was revealed that Andy had left his family on the day of Lisa’s father’s funeral and he’d been conning money out of their friends. Andy tried to assure her that he wanted to be around for the kids but she wasn’t buying it even though she reluctantly agreed to let him see the kids.

Tony called Lisa and told her that they’d located the man, Chris McGregor (Nigel Hastings), Stephen had paid £2,000 to and he was a forensic accountant. Chris revealed that Stephen suspected that someone was stealing money from the firm and he thought it was someone in the family.

‘The Bay’ continues Wednesday at 9pm on ITV. The full series is available to watch on ITV Hub now.