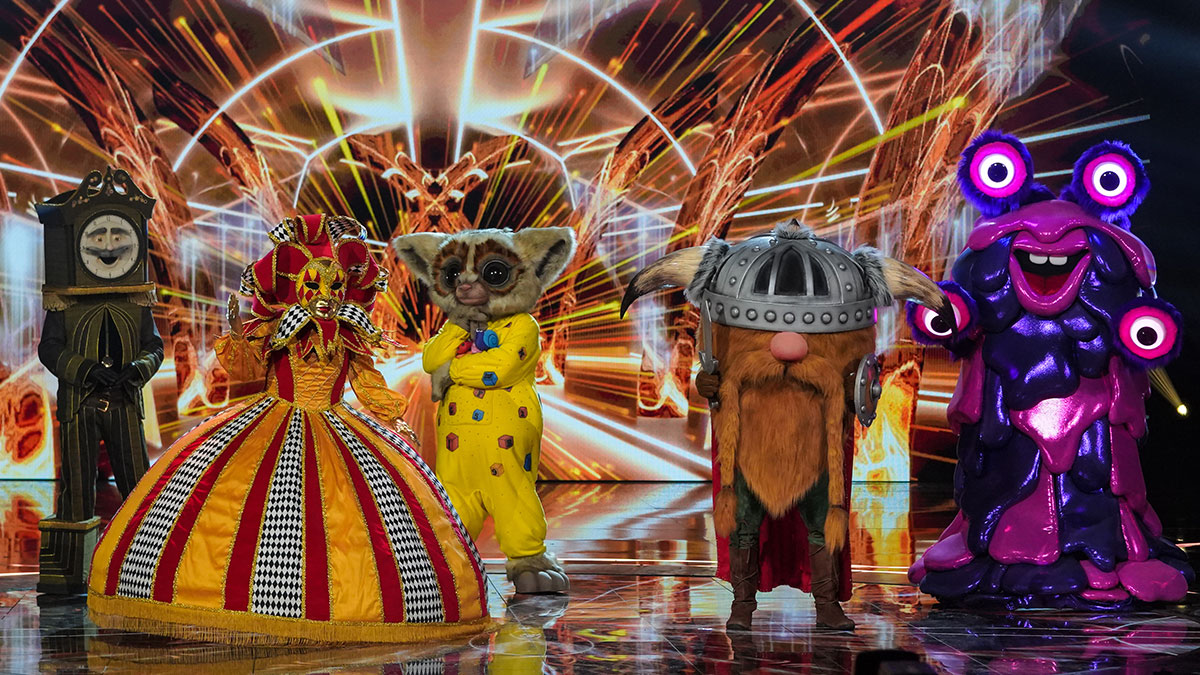 ‘The Masked Singer UK’ continued last night as five contestants performed again and one was unmasked at the end.

Joel Dommett, in a very jazzy suit, presided over the evening with panellists Mo Gilligan, Jonathan Ross, Rita Ora and Davina McCall on hand to offer weird and wonderful guesses.

Clues were all over, as usual, so I’ve rounded up all of the latest clues to help you figure out who is underneath the masks.

Keep reading for all the clues and our latest guesses….

The clues: Harlequin said her last performance was scary but a lot of fun. She said she was fascinated by stories and loved to read, especially horror stories. Harlequin likes to tell stories of her own and her stories have been heard all around the world. It’s time for a new chapter.

Previous clues: Harlequin said she wasn’t a fool but she liked to joke. She said she’d have to be pushed on stage and likened being on the show to doing karaoke, which she said was new for her. Harlequin once played a male lead in a musical.

Our guess: Gabrielle. I’m not changing my mind on this one. I’d know that voice anywhere.

The clues: Bush Baby said he used his magic skills to trick the panel and was still using a fake Australian accent. He was seen boxing and brandishing a sword. Bush Baby said he was going to be the ultimate master of deception and called himself a trickster.

Previous clues: Bush Baby sounded Australian and said he was full of mischief. He also did some magic tricks and pulled what looked like a potato out of a hat. Bush Baby wore a fez and was seen pulling some boxing moves too. After his last performance he said a lot of his wardrobe has been seen on screen.

Our guess: Stephen Mulhern. The presenter and magician could very well be under the mask. I think he’s purposely disguising his singing voice as well as his talking voice but this is my best guess so far.

The clues: Viking said he emerged victorious from his last battle. He lives by his instincts and he’s left footprints in countries outside of his own. Viking breaks the rules and said success can be found when he breaks something.

Previous clues: Viking said he was curious and an explorer that forged his own way. He said he discovered answers and was looking for a voice. Viking also kept emphasising the ‘king’ part of his name. After his last performance he said he wears another kind of armour.

Our guess: Ricky Wilson. The Kaiser Chiefs frontman definitely fits many of the clues we’ve had so far. I’d previously said James Blunt but after this performance, I don’t think it sounds like him.

The clues: Blob said he’s a bit of an academic but the panel hadn’t got their guesses right yet. He’s duetted with some amazing artists as a musician and once played for a top political journalist. Blob has worked with George Michael’s producer and he’s written songs too.

Previous clues: Blob was seen in a school and said it’s not the first time he’s been called four eyes. He said he was loud and bright, and that he wanted to be James Bond or Batman as a kid. Blob ended his clue package saying he wanted to make a good first impression. After his last performance he said he recorded a demo for Simon Cowell.

Our guess: Lenny Henry. I’m still convinced on this one. The clues are throwing me off a little but it sounds like Lenny.

At the end of the episode Grandfather Clock was unmasked and revealed to be former footballer and manager Glen Hoddle.

The other contestants unmasked so far are Swan who was Martine McCutcheon, Seahorse who was Melanie B and Alien who was Sophie Ellis-Bextor.

Advertisement. Scroll to continue reading.
In this article:Featured, The Masked Singer UK