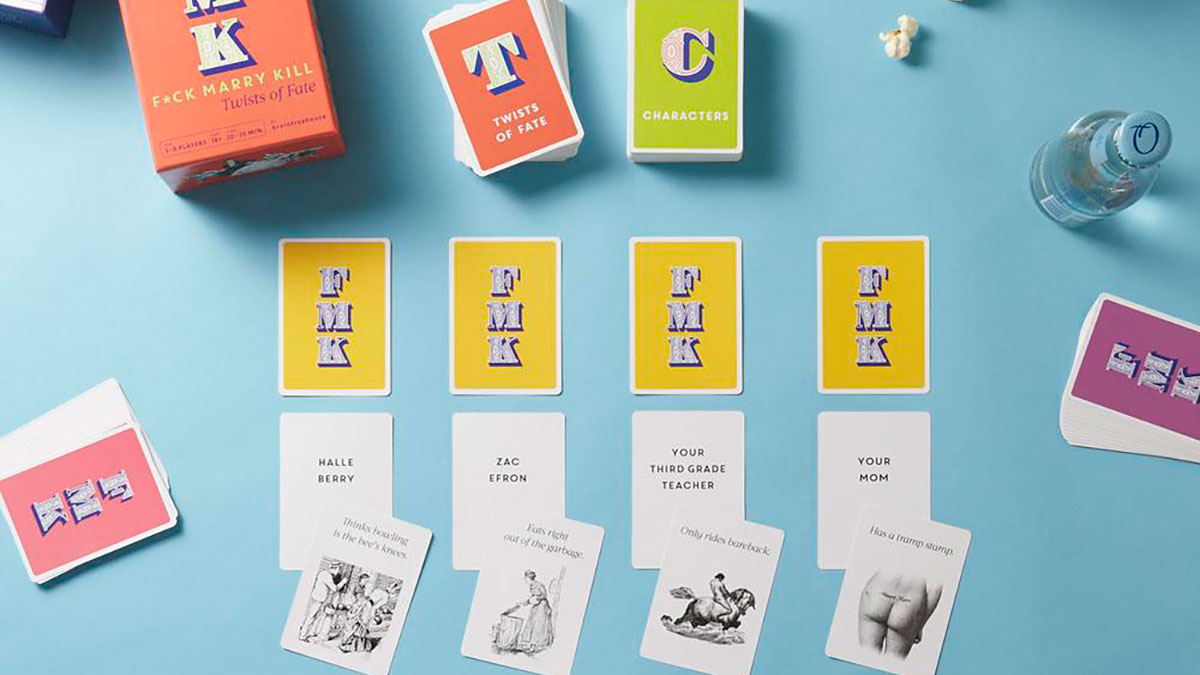 No doubt you’ll be familiar with the concept of ‘F*ck Marry Kill’, a game that requires you to assign each of those actions to three different people, often celebrities. It’s a game that’s been around for years and has been played around many a pub table.  Braintreehouse has put a spin on the classic game with the release of card game ‘FMK: Twists of Fate’ but is it a twist worth having?

Like the original ‘F*ck Marry Kill’ game, ‘FMK: Twists of Fate’ includes a pack of cards with the names of a number of celebrities along with some random people (e.g. your mom, your third grade teacher etc) just to make the game a little more uncomfortable. The ‘twist’ as it were is that in each round you have to draw four ‘Character’ cards and four ‘Twists of Fate’ cards. That gives you combinations to consider before you decide who you would ‘f*ck’, who you would ‘marry’, who you would ‘kill’ and who you would ‘pass’ on.

Each round one player becomes the ‘judge’ and they draw the cards. They then place their four choices face down next to each combination and the other players have to guess what they’ve chosen. If they guess right, they collect their own coloured card and win a point. The first player to retrieve all of their coloured cards wins.

The ‘Twists of Fate’ cards range from things like ‘has REALLY sweaty hands’ through to ‘constantly putting things up your butt’, and the content is definitely only suitable for adults. The problem is that the ‘Twists of Fate’ don’t really add anything to the game. Yes they make you snigger a little bit when you have a combination like ‘Zac Efron wants to be called “Mr Peanut” during coitus and to be “unshelled” then “salted”’ but it’s unlikely to influence any decisions you might make, thus rendering the ‘Twists of Fate’ cards redundant. Regardless of the twist, you’ll likely still make your choices based on who the person is.

I can see what the creators were trying to do here but sadly it just doesn’t really work the way it was intended. Everyone is trying to get a piece of the ‘Cards Against Humanity’ market but releasing games like this with added smut but the shelf-life of ‘FMK: Twists of Fate’ is sadly very short. While you may giggle at the scenarios, they often don’t make much sense and they really don’t add anything new to the classic game. It’s a nice try but sadly this one has to be chalked up as a fail.

In this article:FMK: Twists of Fates