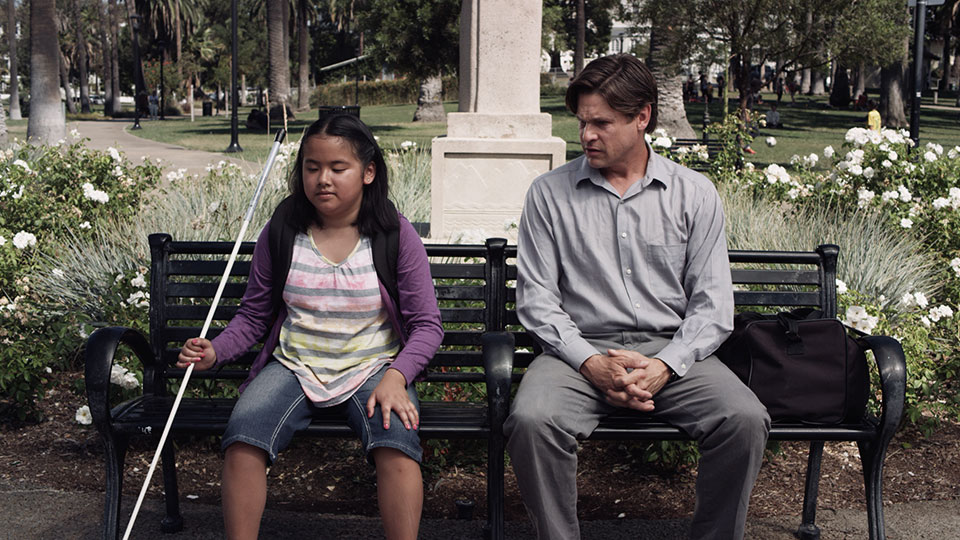 Cardiologist Stephen (William McNamara) is in a spiral after a tragedy resulted in him losing his family. Determined to end his suffering by committing suicide, Stephen prepares everything and makes a list of errands to complete before he does the deed. As he sets out for the day to work through his list, he encounters a lost blind girl called Maria (Kaylynn Kubeldis) who is almost mowed down by criminals. Stephen tries to find a way to get Maria home while staying on track with his to-do-list so he can follow through with his initial plan.

Opus of an Angel is an engaging and interesting film. It puts you firmly in the shoes of Stephen as he prepares to end his life, no longer able to cope with the pain and suffering of the tragedy that robbed him of everything. Through flashbacks, and sometimes just audio snippets, we piece together what led to his rapid descent and we learn the truth about a man whose commitment to his work ultimately became a huge regret. When he stumbles upon Maria, he’s inconvenienced but she soon works her way into his affections as she follows him around for the day.

Stephen’s unexpected connection with Maria, makes him wonder if he really wants to go through with his suicide plan and the non-too subtle concept here is that Maria is the personification of an angel, put in his path to prevent him from taking his own life. She of course has no idea what Stephen has planned but her gentle and disarming nature allows her to foster a connection with him that catches him off-guard. Maria is quick-witted, intelligent and in need of an adult to help her and keep her safe after getting lost in the city.

Opus of an Angel is well-made and impressively shot but the script and plot does hammer you over the head a little too much. While we get to learn a lot about Stephen, we barely learn anything about Maria and depending on how far you take the idea that she’s an angel, rather than just a blind girl who got lost, your enjoyment of the film may vary. At its heart the film is one about the importance of human connection but it’s a little clunky in places in terms of executive.

William McNamara is strong as Stephen. His performance never gives in to melodrama and he is perfectly measured as a man who has come to terms with the idea of suicide. Some people may find his stillness a little unsettling but I thought it served the character well, keeping the audience on his side and rooting for him. Kaylynn Kubeldis is entertaining as Maria. She’s a little rough around the edges in parts but overall her performance is a warm one.

Opus of An Angel is a solid film that is a little different to anything else I’ve seen in the past few years. It’s not a perfect film but it does highlight the struggle that many people go through when they feel suicide is the only option they have left. The end goes to lengths to explain just who Maria is and it’s a little hokey, especially if you’re not in the slightest bit religious, but the film is sweet enough.