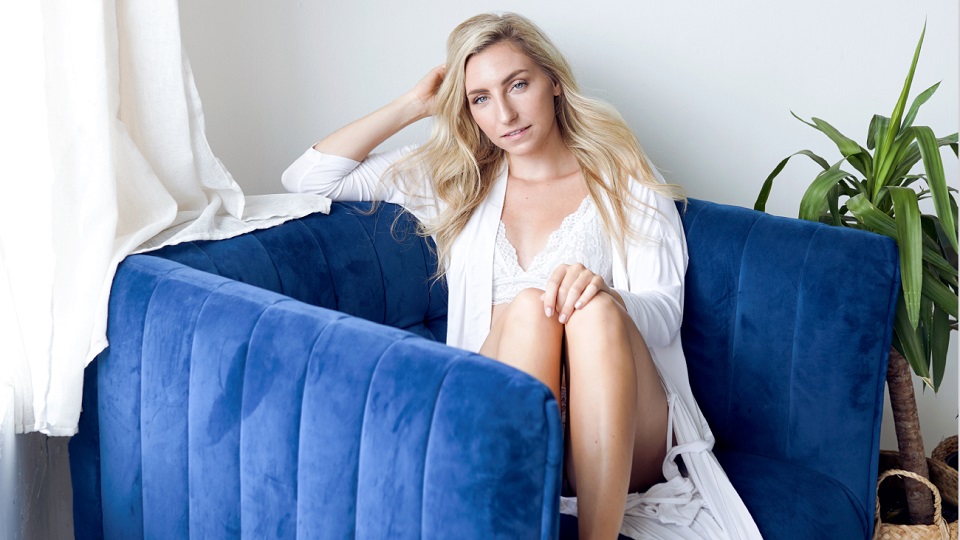 Originally from a small town in Ontario, Canada, Sarah Wickett grew up in a music family and began writing songs at a young age, inspired by artists including Shania Twain, Carrie Underwood and Christina Aguilera.

She moved to Toronto at the age of 18 to study journalism, where she recorded and released her first EP. That led to performances at venues and festivals across Canada, appearing at Canadian Country Music Week and a showcase at the 2017 Canadian Country Music Awards. Currently she’s working on her sophomore EP and has released her third single from the project, What We Do, today (Friday 17th July).

I recently spoke to Sarah about the new song and EP, how she approaches her songwriting, her favourite songs to play live – and who she would love to collaborate with…

Well I love writing clever songs and I love writing songs that have double meanings and things like that, but also just fun, easy listening. There are gonna be some super sad songs on the EP that I’m releasing, but I feel like all my songs are really different that are gonna be on the EP so anyone could kind of relate to them.

Your new single What We Do is out now – what can you tell us about that?

Yeah, so I’m in a really great relationship right now and I wanted to write a sexy love song about that and I feel like women don’t really talk about that kind of stuff in songs as much as men do. And I’m really confident in my sexuality and I wanted to help other women feel that way, and feel like it’s OK to embrace that side of them as well. We also have a music video coming out for that shortly after the song will be released and it’s pretty steamy. I went back and forth on getting a female actress to play my part but I thought it’d be kind of cool to push the envelope a little bit and show that side of me as well.

This is the third song you’ve released from your next EP. Do you feel your approach to your music has evolved over the last few years?

Yeah, I mean for What We Do I think we’re gonna try to do it a little bit bigger. So definitely heavy on the marketing side and PR and I did a full music video and everything for it, behind the scenes and all that stuff, so really going out there with this one, more so than the other ones.

I also wanted to ask about your songwriting. Do you have a typical songwriting process? Or does it vary from song to song?

I think it depends on the song. Every one’s kind of different. I mean I could be driving in the car and see something and then have to pull over to take a quick voice note and write down what I thought of. But usually when I sit down I usually have something. It might be a line or two written down and then I’ll find the chorus and finish the song with the guitar and everything.

Yes. Lots! [laughs] Having this time off because of COVID has been really nice, but it’s been hard to find inspiration. I’m sure a lot of artists feel that way, just because we’ve been inside and not out doing things where we would get inspired, so lots of writer’s block. I have written a lot during this time, probably more than I have ever, but I feel like it’s also hard to write songs when you’re really happy [laughs]. It’s just easier to write songs when you’re heartbroken and I’m really happy right now.

Who would be your dream collaboration – either as an artist or a songwriter?

Oh my God yes. So many people! [laughs] Let me see… I’d love to collaborate with Hardy. And then I love Lacy Cavalier right now – she is kind of an up and comer in Nashville and her style is so incredible and I think she’s an amazing writer and singer. So I would love to write with her as well.

You’ve spent quite a lot of time out on the road before COVID hit. What have you learnt from touring over the years?

I think when I was playing shows and stuff I was doing more covers and things like that. So I actually took a couple of years off of that recently and this year I was supposed to be getting back into it. But I just realised that I really wanted to do this and I knew that performing covers in a local bar wasn’t doing it for me any more. And I was playing my originals but people wanted to hear the covers. So I was like, ‘I want people to be coming to my shows to hear my music, I’m gonna take a couple of years off and figure out how I can make that happen – just write some really good stuff and figure myself out more’. So that’s kind of what I did and now hopefully we can get back to performing again soon [laughs].

Do you have a particular favourite song to play live?

I mean out of my originals I think my favourite one to play was Tattoo. Just my older stuff I used to play obviously but that one was always a lot of fun. Covers… there’s so many fun covers. We used to do Gunpowder & Lead by Miranda Lambert, that was always a really fun one. And we did a lot of Carrie Underwood songs, which I adore her. All of her songs are really fun.

Who would you like to cover one of your songs?

Oh God, I don’t even know! I can’t even imagine anyone big covering one of my songs. But if I was walking along at a festival or something and an up and coming artist were covering my songs I would be freaking out. Even when people send me covers of them just singing online I think that’s really cool.

You’ve been an independent artist for a while now. What would you say are the best and most challenging aspects of that?

I think the best parts are just being able to make my own decisions, being able to do whatever I want. And then the challenges have definitely been having to learn everything on my own. I’ve definitely had some guidance and things but I’ve had to learn how to ask for things. I’m kind of a shy person so I don’t really like to ask for help. I like to learn things on my own. But I’ve learned it’s good to ask for help and it can only help you. And obviously money is a challenge, not having a record label behind you for marketing and everything like that can be challenging.

How has coming from the Canadian country music scene impacted your approach to your music?

I think it’s unique, especially coming from Toronto because there’s so many up and coming artists coming from Toronto right now. We have a really good rep right now [laughs]. There’s so many good Canadian artists and I think people are starting to recognise that. I mean we have Shania Twain… I think they’ve been coming but now I’m actually in the scene I’m just seeing everyone grow and people are moving to Nashville and launching their careers there. It’s been really nice seeing fellow Canadians doing that and it’s inspired me to do that.

It’s not even a country song right now, but it’s called I Don’t by Sabrina Claudio. That song is so heartbreaking and every word is just… I’m a huge sucker for really sad songs that make you cry every time no matter where you are, and that one does that for me.

How have you been keeping busy during lockdown?

Yeah, I’ve been focusing a lot on writing and I was doing the live shows. I had a series called Friday Night In which was a live show on social media every Friday night in May. And right now we’re able to get back into the studio so we’re finishing up the EP and that’s been taking up a lot of my time which is nice. And I don’t have to work right now so I can literally just focus on music and just be really focused on that.

You’ve mentioned the EP a couple of times – can you give us any more clues about that?

Yeah, so it’s gonna be coming out early next year. It was gonna be coming out in the fall but we pushed it back because of COVID. I’m probably gonna release one more song in the fall before we release the EP. But every song on it is very different and it showcases all sides of me. I love country music, I love pop music, I love R’n’B music, I love all music so I wanted to showcase that. I feel like my old stuff it was all kind of similar so I wanted to mix it up on this one. Hopefully by then we’ll be performing again and I’ll actually be able to get on the road.

Are there any plans for an album at some point?

Well the EP’s actually pretty long – it’s a seven song EP. That’s what we’re gonna run with for probably the next year or so.

And finally… when we can travel safely again, have you got any plans to come to the UK?

I would love to come to the UK. No plans yet, but you never know what can happen [laughs].

Sarah Wickett’s new single, What We Do, is out on Friday 17th July.

Advertisement. Scroll to continue reading.
In this article:Sarah Wickett