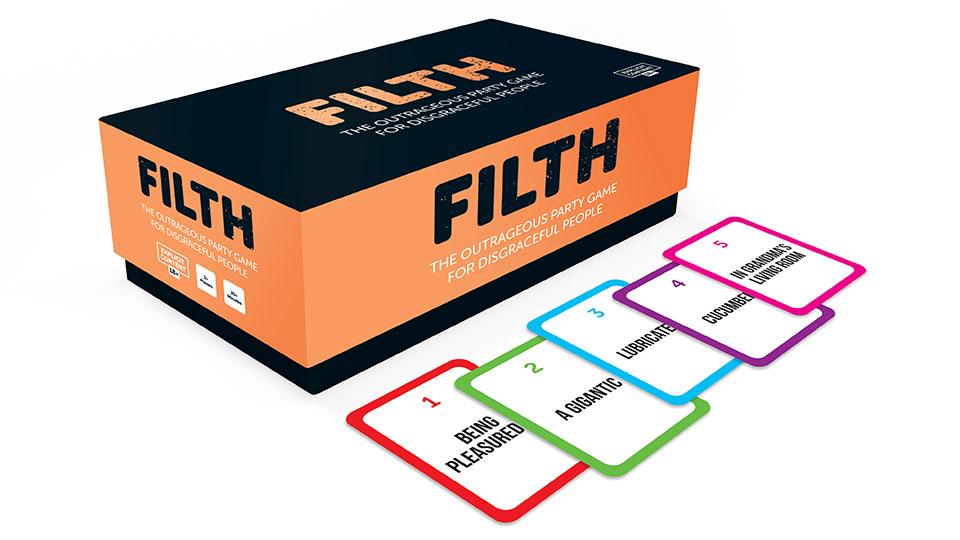 Since the arrival of Cards Against Humanity, and its subsequent huge success, games makers have been scrambling to create their own saucy and borderline (if not flat out) offensive games to capitalise on it. A new addition to the wealth of games out there is Filth from Summersdale Publishers Ltd. The card game, which hopes to capture the same market as Cards Against Humanity, warns that you shouldn’t play it with your parents but it is as risqué as it teases?

Given that I regularly play Cards Against Humanity with my parents, there’s pretty much nothing off limits so it’s with intrigue and excitement that I cracked open Filth, assembled a few players and got to work testing the game out. Like Cards Against Humanity it’s a card combination game but the twist here is that the cards are split into 5 numbered piles. To play you start with 5 cards – one from each pile – and each round you take a card, replenish your hand with a card from the same pile and pass your cards to the player on the left.

The aim is to go around 5 times until you’ve made the filthiest sentence you can with five differently numbered cards. It’s simple and very easy to pick up, and once you get going it’s pretty speedy to play. When the cards fit together to make a smutty sentence, the game is very entertaining but I found that the options weren’t as filthy as I was led to expect. For every sentence about pleasuring yourself with a cucumber in your grandma’s living room, there were plenty that were completely filth free.

Another thing that slightly hampered the reveal is that passing the cards around means that everyone sees pretty much all of the cards. Where Cards Against Humanity excels is that you have no idea what’s been played until you read them out (usually after crying with laughter for a while first). In Filth you already know some of the options so the laugh-out-loud factor is somewhat lessened.

The winner is decided by completing the amount of rounds that equal the number of players. You can get through a game easily in around 30-minutes so it’s not a big time commitment by any stretch of the imagination.

Filth is a fun game and it’s a nice alternative to Cards Against Humanity but it doesn’t have the same impact as that juggernaut. Don’t get me wrong, it’s very funny at times but the cards were much more vanilla than the box leads you to expect. Personally, I could play this with my family as it’s pretty tame and I imagine after a few drinks, the fun factor may well rocket up. It’s a good effort but it doesn’t quite hit its intended mark.