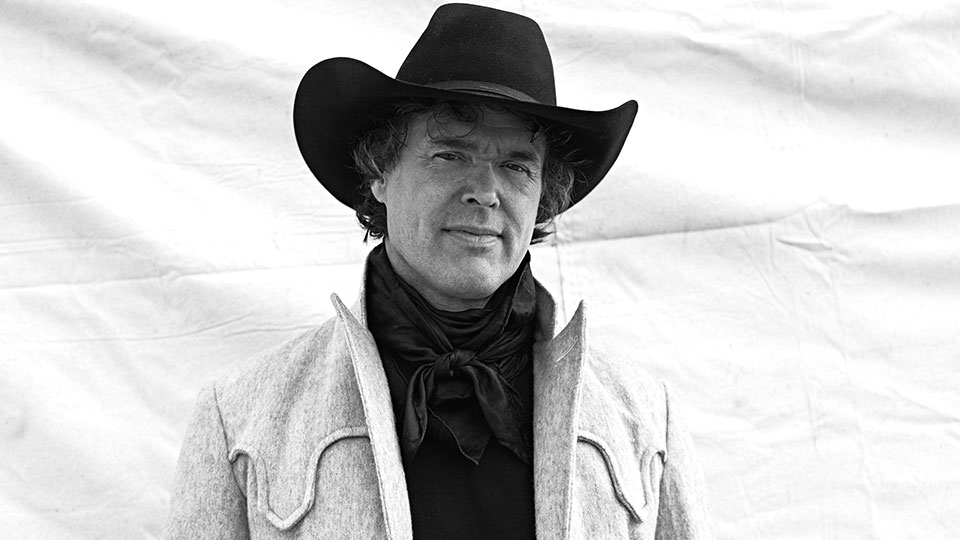 The album, originally scheduled for release back in April, is Corb’s first since 2015’s critically-acclaimed Things That Can’t Be Undone. An uplifting and fast-paced record, Agricultural Tragic pulls on the rural themes that Corb is know for and it features a guest appearance from Jaida Dreyer.

I caught up with Corb earlier in the year to talk about the album, discuss the funny (and horrifying) story behind opening track 90s Seconds of Your Time, and to find out if he’s planning to return to the UK in the future…

Hi Corb. How are you doing?

My house is organised. It’s been kind of a financial wreck and it’s not great for the career but if you compartmentalise that part, it’s nice to be home for a while.

Your new album Agricultural Tragic comes out this week. What’s the story behind the record?

I come from a Western sort of cowboy background so a lot of my songs have to do with rural themes, which are largely missing from country music these days. The tragic part is tongue-in-cheek, but there’s a lot of rural themes in the music. The title is supposed to be a take off on the genre of American Gothic. I’ve been saying for a couple years that I don’t fit in with the genres so I’ve been calling my music agricultural tragic. I thought I’d call the record that so no one would steal it.

You’re normally very prolific and regular with your albums, adopting a 1-2 year release cycle. There’s been a lengthy gap between 2015’s Things That Can’t Be Undone and this new record. What’s the reason for that?

Well, I’ve been doing this for a long time and I reached a point where I was a little bit lost in my head. I didn’t really do it on purpose but I took some time off, played a lot of solo shows and stayed home a little more. About two years ago, after a break, I got super motivated and we put more work into this record than I ever have before. I wrote more songs for it, worked more with the band and it turned out pretty well. This is my 10th record. I don’t really have a huge explanation for it. I guess hit a plateau but it worked out well, because inadvertently took a bit of a break and I came back much more enthused.

You can hear that enthusiasm and energy throughout this record. It’s uplifting and motivating and it feels timely coming out during this current pandemic situation across the world. Did you purposely set out to make a record like that?

I’ve had the same band for about 15 years and we’ve done thousands of shows so we’re very much a live band. We wanted to make this record sound big but then also really raw and organic, the way that we play live. I guess the enthusiasm rolls from the leader down but since I’m enthused the band is the same really. It’s kind of one of those ebb and flow things. We’ve been doing this for quite a long time and we’ve had ups and downs. Nothing really bad happened after the last record, it’s just nothing really good happened either so we were just sort of in a trough. Since I’ve been more induced and wrote more songs, I think it’s filtered down to the guys and we have new management that we’re really happy with, which is much better than before. We deliberately tried to make the record quick, natural and organic. There was no overdubbing, studio trickery or click tracks. The four of us set-up in the room and just pressed record.

I Think You Ought to Try Whiskey is the song I keep gravitating to. I’m so pleased to see Jaida Dreyer on the track. How did that come about?

We’re old friends and I’ve known her forever. She came to me with a song called Horse Poor. It was a tongue-in-cheek song about having too many horses and wasting too much money on equine pursuits. I helped her finish that one. Then she helped me finish one on the album called Raining Horses and she sang on Horse Poor with me. I had written the whiskey/gin song and we needed we needed a demo for it, and Jaida was in the studio doing the horse songs. We just got her to sing it because we needed a female voice to make a demo of it and she just kick the shit out. Everyone loved it so we just kept it.

It brings to mind la proper traditional back and forth country song. That’s what I liked about it. The chemistry that you have on that track is really quite special…

Yeah. You’ve probably noticed we sort of beg, borrow and steal from all different forms of traditional roots music, some of its bluegrass, some of its western swing, some of its blues, but that was deliberately a throwback to the Johnny (Cash) and June (Carter) couple song.

Closing track Tattoos Blues is another interesting moment on the record. I haven’t really heard anything like that before. Can you tell me a bit about that?

It’s funny cuz I wrote that one just as a gag. I wasn’t even going to put it on the record. I wanted to make it quite sparse musically, because I wanted to make sure it was focused on the lyrics. It just came to me. We tried it three or four different ways and one of the band guys said, ‘why don’t you just recite that as a poem?’ and I did it (laughs). We deliberately made the sonics sound quite dry.

Yeah, it’s kind of interesting. The short version of the story behind it is that Evan Felker (Turnpike Troubadours), he’s a good friend of mine, and I went on an elk hunting trip in the mountains in Idaho a couple years ago. We went 20 miles deep into the mountains with a mule string. We packed all of our stuff in there and we had a guide. The guide was an ex-Army Ranger instructor. He’s a great guy, but he’s better off in the woods (laughs). All our animals got untied one day and we came back from the hunt in the middle of nowhere and they were all untied and missing. We still to this day don’t know what happened. We think another hunter untied them because he was territorial or something. The whole last three days of the hunt, we were trying to find these animals and the ranger guy, was saying how it was gonna be great to find the guy, steal his mules and kill them, and plant him in the in the backwoods because he grew up around here and they don’t find the bodies. Finally I said, ‘I need 90 seconds of your time because I gotta make sure you’re not making me an accessory to murder here and let me spend the rest of my life in an American prison’ (laughs). The whole songs is about me trying to talk him out of killing someone who stole his mule string.

Is there a particular song on this record that you were pleased made the final cut and that sticks out for you?

Yeah, there’s one called Never Not Had Horses. It’s about my mom. She was she was raised on a ranch, she’s a cowgirl, and we had to euthanise her last couple of horses a year or two ago because they were just too old and couldn’t make it to winter. She commented that that was the first time that she had never not had horses since she was born. I thought that was kind of a cool moment so I put it on the record. Sometimes I make songs and they’re really special to me, and I put them on the record and they don’t resonate with people. This one may, I’m not sure, but I don’t really care if it does or not because it’s a special one for me.

I feel like this album is going to play incredibly well live. Are you hoping to come back over to the UK and perform this for us?

Yeah definitely. The way the crisis hit us was that we had about three or four months of touring on the books and that had to be moved back. The record was supposed to be released earlier in the year but we moved it back to June 26. It’s hard to say what it’s gonna be like releasing a record into the pandemic, but I mean, you have to do it. You can’t sit on it forever. There’s also an argument that people might want to hear some new music at this time since they’re all sitting at home anyway. We definitely want to get back over. It’s been a couple years. I love playing over there. I’m sure we’ll get over there eventually hopefully even later this year or in 2021.

Advertisement. Scroll to continue reading.
In this article:Corb Lund