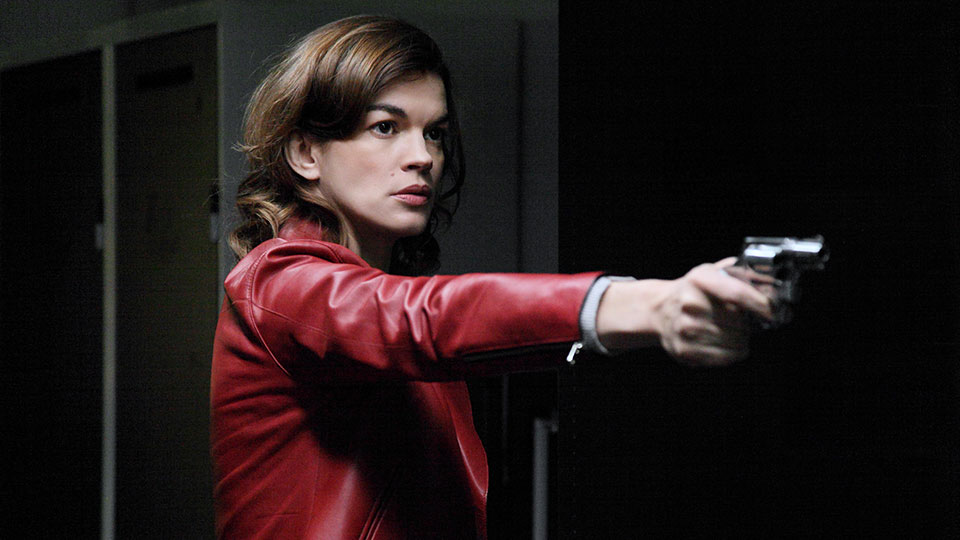 Marie-Sophie Ferdane is the leading actress in a forthcoming Walter Presents French thriller entitled Philharmonia, about a woman who becomes the conductor in a leading Parisian orchestra following the sudden death of the incumbent maestro.

Her character, Hélène, is a strong-willed individual whose first decision is to controversially promote a young woman to the role of lead violinist – the key figure in an orchestra – much to the outrage of the rest of the troupe.

If Philharmonia is anything to go by, the world of the orchestra is an unforgiving pit of jealousy, backstabbing and downright wickedness. It’s an original and intriguing idea for a series; and as we learn more about Hélène’s past, we start to see parallels between her protégée and Hélène herself.

Marie-Sophie is an experienced actress in the theatre, and so I was curious to know if there were any similarities between her experiences of life on stage compared to that of an orchestra?

“Yes. The parallel I can see is that in a theatre, most everything comes from the director. The actors can talk, think and argue, but in the end the decisions are taken by the director of the play. It was strange to change my perspective – to stand on a platform and to lead the orchestra. This was a very strong and physical feeling that I will never forget.”

I’m no expert in the art of conducting, but she seemed very proficient at waving the baton around (I’m sure there’s a more technical term for it), so I wondered if she’s been given any training for the role.

“Yes, I was trained by young conductor called Christophe Dilys, who really made me work in depth. We worked on each piece for hours, trying to understand the rhythm, the feeling and the music. He was there on stage with me at the Philharmonie de Paris, checking my every movements and indications. This was very precious to me (to have that experience).”

Her familiarity with the world of orchestras shouldn’t come as a surprise to viewers, though, as she explains:

“I studied violin for 12 years at the conservatoire (a highly regarded music college, known as the Conservatoire national supérieur de musique et de danse de Paris – often abbreviated to CNSMDP). And I spent my whole childhood as a member of an orchestra. This was very helpful as I was to play the violin at the end of the series.”

And what was it like playing a strong, resourceful woman in such a male-dominated role? It seems like an area where gender-equality hasn’t really penetrated.

“The orchestra is a very particular world; very, very few women are allowed to conduct in an orchestra anywhere in the world. Things are changing, but very slowly. The French word for conductor is chef d’orchestre, as in ‘head of the orchestra’. Yet, in any given profession, heads are rarely women. So, this was the opportunity to make this character a sort of status symbol. To stand on a platform, to give the tempo. Well, this is still quite uncommon. But times are changing.”

This interview was conducted in lockdown, obviously, but I’d read in a previous interview with her that she enjoyed travelling and visiting theatres around the world. I asked if she felt that theatres are a window to the character of a city?

“They tell us something about the city, yes. The architecture tells the history of the town. And the theatrical programming gives an idea of the general mood.”

The theatre came to Marie-Sophie relatively late in her life; but she’s always been inspired by the creative arts, albeit in a different form in her early years.

“I wanted to read and to teach (when I was younger). So, I started out at first studying literature. Then I discovered the theatre and it changed my life.”

Philharmonia centres around the mysterious death of the original maestro, and one of Marie-Sophie’s first roles was in the brilliant French crime thriller, Spiral – does she enjoy a good thriller?

“Yes, I do. I acted in the first season of Spiral and I really enjoyed the experience – it was one of my first acting roles.”

As with all of us in the current climate, the future is somewhat clouded by uncertainty as a result of COVID-19, but Marie-Sophie is hoping to be back treading the boards soon:
“For now, with the coronavirus crisis, everything has stopped. But I have many projects, mainly in theatre, which I hope they will come true in time.”

Walter Presents: Philharmonia will be available via All 4 from Friday 29th May and the first episode will air on Channel 4 at 11pm on 31st May.

In this article:Philharmonia, Walter Presents