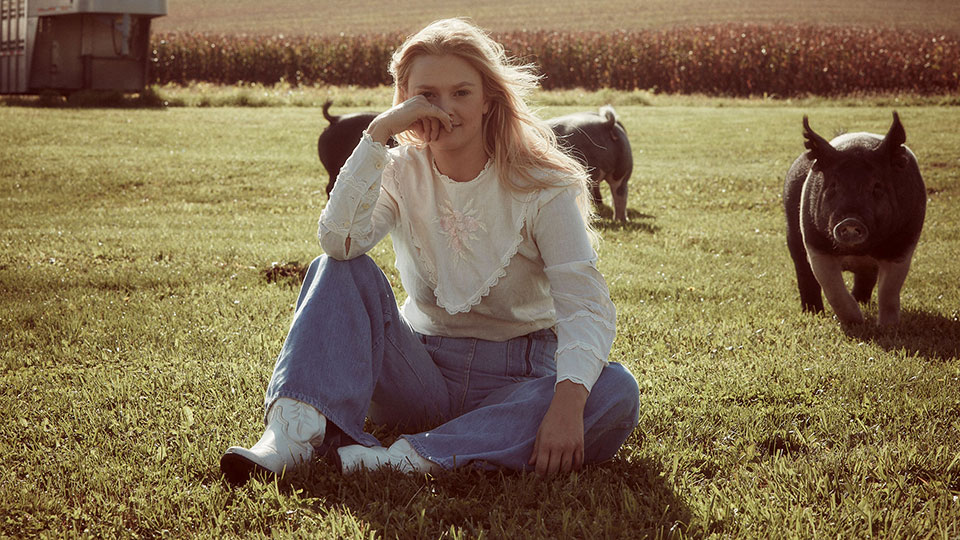 Hailing from Shueyville, Iowa, rising Country singer-songwriter Hailey Whitters is really beginning to pick up steam thanks to her latest album The Dream.

The set, which was released in February, was produced by Jake Gear and features the breakout single Janice at the Hotel Bar. For the record Hailey wrote with the likes of Lori McKenna, Brandy Clark, Hillary Lindsey and Waylon Payne, and she’s on the cusp of having a true breakthrough moment.

I caught up with Hailey to talk about making The Dream, discuss her experience co-writing with some of the biggest songwriters in Country music, and find out how she feels about the reception that Janice at the Hotel Bar has been having…

10 Year Town really sets out the stall for what we’re about to hear on The Dream. What was the inspiration for the record and how did you bring it all together?

I’ve been in Nashville now for 12 years and everyone always says it’s a 10-year town. A few years ago, I was coming up on my 10-year mark, and just feeling frustrated with where I was. I went in to write with Brandy Clark and I’d had this idea, 10 Year Town, and I threw it out to her. She’s somebody who’s also been in town for quite a while so I feel like we have that mutual connection on that topic. We wrote that song and I went into record it. I’ve been working with a few different producers at a time and just felt like I had yet to really find a sound that felt like me. Out of necessity and frustration, my boyfriend and I decided to produce a project together. It was my last ditch attempt to try and make something, and I was feeling like if it didn’t work out, I could say I tried and pack up and head on home. We recorded this record and 10 Year Town definitely felt like the starting point of that period of frustration and me discovering what the dream meant to me. We released 10 Year Town and it’s obviously very true to my story and my journey here. We just felt like it would be the right introduction to the record.

What was writing with Brandy Clark like? She’s known for her witty and insightful lyrics. Was it an easy collaboration?

That was the first time I had ever written with Brandy Clark. We have a problem of just sitting and talking for hours and then we’ll finally get on a song. I remember that day we had sat and honestly had a therapy session. She’s a hero of mine, so somebody I definitely wanted to pick her brain on Nashville and the journey. I admire the way that she makes records and puts out records. I was just sitting there in awe, a huge fan. After several hours I threw out that title and I remember she shot out the line, ‘I’m 12 years in to a 10 year town’ and then from there, it just felt like we were spitting out lines that just happened to rhyme. I remember we had to come back another day. We sat on it for a month and then we got back and finished. It felt very natural. I think that topic especially was something that we both just related to so well that it honestly felt like a therapy session more than anything. We were venting and I knew when we finished it was something that was very special. Brandy is an absolutely great writer. She’s a brilliant lyricist and she just has the classic country elements to what she does. She’s brilliant.

One of the things I love about this album is the specificity of the lyrics. There’s just so much detail in there. The song I’m always drawn to is The Faker. What’s the story behind that one?

I wrote that song with Waylon Payne and Hillary Lindsey. Waylon and I were sitting on Hillary’s doorstep, waiting for her to come let us. Waylon had just gotten a message from an ex and he was really riled up about it (laughs). I guess songwriting is free therapy! We sat down and he just started venting about this relationship and how his ex was very manipulative and deceitful. I think he had said, ‘I was a sucker for the faker’. He was using words and language like that so we were like, ‘why don’t we write a song called The Faker?’ Waylon had such a classic country chord progression that felt like an old Patsy Cline song to me. We just wanted to keep it really raw. That was actually one of the songs that was a late addition. It wasn’t something that I really had a vision for but Jake, my producer, was the one that was like, ‘we have to cut this song and we have to cut it just you and a guitar, just very bare bones’. The tape that ended up being on the record was just a straight take. It was me and Kris Donegan. We didn’t alter the vocal, we didn’t do overdubs or anything. We just kept it really raw and vulnerable

In 10 Year Town you sing about waiting for that one song that’s going to give you ‘a moment’ and I feel like that moment is on its way thanks to Janice at the Hotel Bar. That song has been getting such a buzz over here. How do you feel about the reception it’s getting?

I am so proud of that song. I needed to hear that message so desperately in my personal life. Seeing the reception of it… women are starting to tag their Janice and post photos of these incredible women that have had these big impacts on their lives. Getting to read their stories has been something I’m just very proud of because I feel like it’s just taken on such a bigger meaning and kind of transcended into this universal song about female empowerment and it’s a love song to the women that have come before us and raised us and shaped us. I’m really proud of that because I feel like it’s just a positive message and it’s uplifting. I love my Janice. The Janice in my life is somebody that I have such a spiritual connection with, and she’s so important to me. To be able to be the vessel that allows other women to do that, I’m really proud of that. Especially because that was something I needed to hear so badly. I’m very happy to see it resonating with other people and people sharing the message of the song.

For this album you also wrote songs with Lori McKenna. What was that experience like and how did you get introduced to her?

Lori’s another hero of mine. I was cherishing her records when I first moved to town. She was one of the first songwriters I ever found out about and just worshipped her, her craft and what she does. I just think she’s on the highest bar of songwriting. She was definitely always a dream co-write for me. After a few years, my publisher was finally able to land on a session with her so I flew up to Boston and I got there a day early. I wanted to settle in and get my head in the right space. I went in and showed up at her house in Massachusetts and she’s just everything that you would hope that she was. She’s warm and welcoming and inviting. Despite the massive amount of success she has, she treats you like you’re this lifelong friend. She’s just a beautiful spirit and equally just a beautiful songwriter.

I always feel like I kind of black out when I write with Lori. I don’t really ever know what happened after the co-write other than I just feel like it’s a very magical connection. She has a way of tapping into the human condition that feels very simple yet profound and conversational but poetic. I adore her. I absolutely cherish every write that I get to do with her. She had three songs on the record. We wrote Happy People, we wrote Janice, and we wrote Living the Dream, which is the title track of the record. Happy People was our first write that we had ever done on that first trip I took to Boston. Jake and I were already probably halfway through recording the record when I went up to write with her again and we ended up writing Janice, and Living the Dream. That was a really important session for me because once I had written those songs, I really felt like we had solidified the concept of the record.

We get to hear your original vision for Happy People on The Dream. Country fans will be very familiar with Little Big Town’s version. That must have been mind-blowing when they decided to cut that track?

Especially because that was their our first co-write. I was sitting in the Boston Airport getting ready to leave and my publisher had already texted me saying Karen Fairchild just called and asked if (Little Big Town) could put it on hold. That doesn’t happen. That’s not how people usually get cuts. I was really kind of floored by that. That was really, really cool.

When we get through this pandemic, do you have plans to come to the UK to play for us?

Absolutely! It is at the top of my list of things to do. I’ve been eagerly anticipating getting over there. The support that the fans have shown me over there has just been overwhelming. All the posting and the love on socials, so I feel like we already kind of all know each other. I’m very much looking forward to being united soon and being able to come play some live shows over there.

What would you say was the biggest challenge when you were making this album?

The biggest challenge when I was making the album? (thinks about it). I feel like it was a challenge but I felt like we did it pretty well. I would say probably tuning out the rest of Nashville and just solely focusing on creating something that we believed in and we were proud. It’s so hard to be right here in the middle of all of it and have all these external factors that are happening outside of you and still just stay focused and true to yourself. I think that’s a really hard thing to do. I was savagely protective of that and protecting my headspace and my creative energy. I think I just had to because if I gave it any room to open and be vulnerable to other people’s opinions and standards of me, then I think that I would have lost some of the magic of the process.