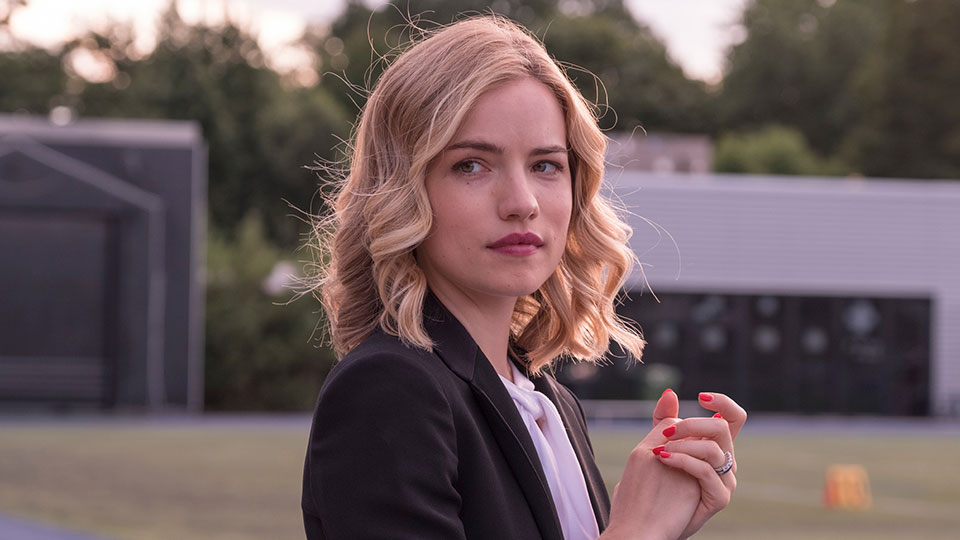 Willa Fitzgerald is probably best-known to UK audiences for her role as Emma Duval in the MTV series Scream, which was based on the hit horror franchise of the same name.

After two seasons, Willa moved to star in shows such as Bull, House of Cards and Younger, and she now plays the role of Colette French in the cheerleader drama Dare Me from USA Network. The show recently arrived on Netflix in the UK.

I caught up with Willa to find out more about the show, discuss her character, and to find out what viewers can expect from the first season…

Your new series Dare Me recently debuted on Netflix here in the UK. What’s it all about?

Dare Me is about a cheerleading team in small town America and the coach who comes back to make them great. It is a thriller, it’s a noir. It’s about complicated female characters and even more complicated power dynamics. It’s about what it means to be alive and want things.

In the show you play the character of Colette French. What do we need to know about her at the start of the season?

She doesn’t give much away. I would describe her as an incredibly compartmentalized and private person. She grew up two towns over and has returned to Sutton Grove to give her husband the opportunity to advance in his career. She is at a turning point in her own life – a new mother and a wife, she is starting to feel trapped by the world she has created for herself.

By the end of the first episode it’s revealed that Colette has her own secret that’s on the verge of being made public. What can you tease about how that plays out across the season?

Well that specific secret certainly creates a specific power dynamic amongst the people who know. And over the course of the season – the secrets only multiply!

What attracted you to the role of Colette and how did you come to audition for the role?

I was immediately drawn to how little she gives away. In the pilot she’s this iceberg, you see a tiny fraction of who she is, what is going on emotionally with her. And that give me, as actor, a ton to play with and explore. I’ve always been drawn to characters who have a complicated web of secrets.

This role is very different from the ones we’ve seen you in before. What would you say were the most challenging aspects of playing Colette?

The most exciting part about diving into Colette as a character was probably the fact that she is a mother and a wife. I’ve never really played a character who was so superficially “grown-up” – although I think we see as the season goes on the ways in which she is not as mature as she maybe initially appears.

The show recently completed its first season run in the US. How are you feeling about a season 2 renewal?

The reception to the show has been so positive! I think we are all very excited at the prospect of continuing to tell this story.

Why should UK viewers tune in to Dare Me?

I think Dare Me is a wonderfully escapist TV show for these troubled times. It really sweeps the viewer along. I also think Megan Abbott has done a fantastic job of writing female characters who are complicated, messy and fascinating.

I was actually in the middle of shooting some of Billions and an indie.

Lastly, with the world in lockdown over COVID-19 what’s your top tips for keeping busy and avoiding getting stir crazy?

If you have the opportunity to slow down, do! It’s tempting to view this time as an opportunity to be hyper-productive or do all the things you’ve never had time to do. But I think that in some ways the best use of time is to simply practice sitting and being. That being said, I’ve been doing a truly ridiculous amount of baking and cooking considering I’m quarantined alone. But that has certainly felt deeply nourishing and soothing.

Dare Me is available to stream on Netflix in the UK now. Watch the trailer for the show below:

In this article:Dare Me, Netflix, Willa Fitzgerald