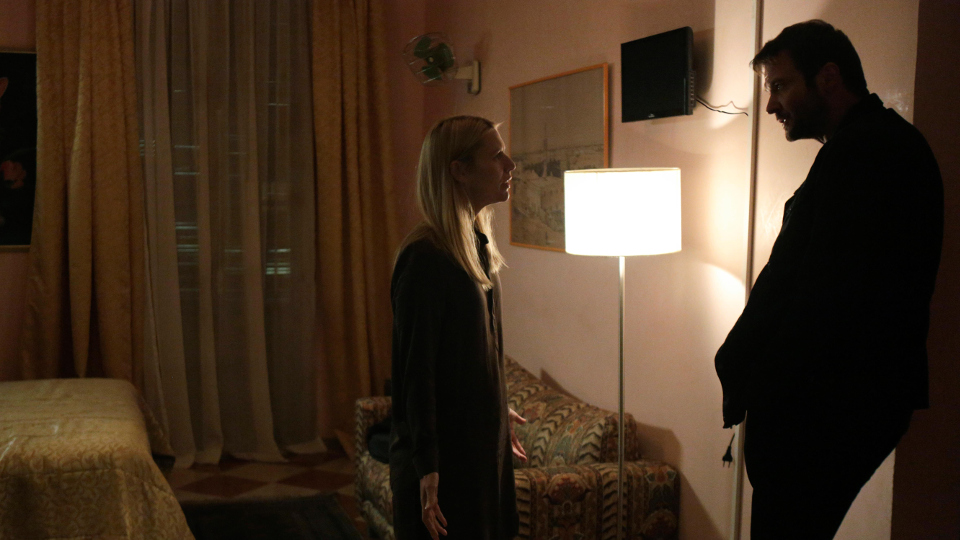 The episode opened up with Saul (Mandy Patinkin) arriving back at base after the disastrous attempt at bringing Carrie in last episode. He walked in to find Mike (Cliff Chamberlain) prepping a new plan to capture Carrie. Saul was furious and told Mike to stand his team down. Mike said Carrie was in full flight which Saul said was nonsense, knowing Carrie would be after the flight recorder. Mike wasn’t for listening and informed Saul that he’d been recalled to Washington.

The CIA team used a drone to follow Carrie and Yevgeny (Costa Ronin) but lost them when their vehicle went under cover. Before continuing their search for the flight recorder, they checked into a local hotel. In the lobby they saw the news which was reporting about the situation in Pakistan. They promised they would treat any incursion of US troops as an act of war. Carrie spoke to Yevgeny and explained that she thought the helicopter may have malfunctioned.

The next day they went searching around the pawn shops that dealt in tech. Their initial searches came up empty but they were approached by a kid who said he knew where to find what they were looking for. They followed him to another pawn shop where they were greeted by the owner. He was in possession of four flight recorders but not the one they sought.

Meanwhile, Saul arrived back at the White House and went straight to a meeting with President Hayes (Sam Trammell), Wellington (Linus Roache) and Zabel (Hugh Dancy). Saul immediately expressed his concerns about recent events and explained that the video that they used hadn’t been vetted properly. He knew it was possible that Jalal was telling lies to get the Taliban on his side. Saul also pointed out that Zabel wasn’t qualified to be making the moves he was. Zabel argued and managed to keep Hayes on his side. After the meeting Saul was furious with Wellington but he pointed out that he wasn’t been kept in the loop or listened to.

Carrie and Yevegeny split up and finally Carrie had some luck. She found Max’s rucksack but the shop owner said it was empty when he received it. Yevgeny arrived and told them the American team were looking for her. He wanted Carrie to leave by the rear exit while he would try to distract the search team. Before she left, Carrie spoke to the shop owner and made a deal to meet back at midnight.

Yevgeny met her back at the hotel and said they needed to leave but Carrie refused. Instead she came up with a plan which involved using Jenna (Andrea Bragg). She called her and said she was close to finding the flight recorder but needed her help. She wanted the location of the safehouse where the search team were based, promising that she would go there once she had the flight recorder. Jenna was torn but but gave her the information. Yevgeny passed the location to the authorities to have them arrested.

While Yevgeny was out, Carrie climbed out the window to make her midnight meet. She’d managed to get Saul to arrange a million dollars as payment for the flight recorder. She returned to the pawn shop and met the seller. He showed her the flight recorder and she verified that it came from the helicopter. She arranged payment then threatened him at gunpoint to leave.

Carrie began to listen to the flight recorder but was tracked down by Yevgeny. He listened in as well and they both heard that the helicopter came into difficulty and crashed while attempting an emergency landing. Relieved that she was right she posed the question “What happens now?” and asked Yevgeny to help her get it to the American embassy.

He asked why he would do that and she said she believed he was good. She proposed that they could keep working together. Somehow that turned into the pair making out before Carrie stopped and remembered the task at hand. She said they could get back to making out later once they had delivered the flight recorder. Before she could react, Yevgeny had a needle in her neck. He took her back to the hotel, placed her on the bed and kissed her head before taking off with his team and the flight recorder.

Elsewhere in the episode, Tasneem (Nimrat Kaur) went to meet with Jalal (Elham Ehsas). She was met by Balach (Seear Kohi) who had her hooded before she could be driven into the mountains.

At the meet she chastised him and told him to stand down. If he didn’t comply she promised Pakistan would hunt him down and replace him with someone who listened. She followed him outside and was shocked to see the huge number of fighters that he had amassed. He raised his arms and they all began chanting his name.

Tasneem went to her father (Art Malik) and said that they would have to protect Jalal. She also said that they must answer American threats with threats of their own, in the strongest possible terms. This meant threatening to use nuclear weapons.

At the end of the episode, Wellington called Saul to explain that Pakistan were moving their short-range nukes in response to the threats that Hayes had made. In the situation room, Zabel was convinced that the Pakistani’s wouldn’t use them. Hayes was frustrated that the Pakistani’s hadn’t backed down but it looked like they were drawing plans up to strike before they could use them.

Can’t wait for the next episode? Read our Homeland season 8 episode 10 preview.