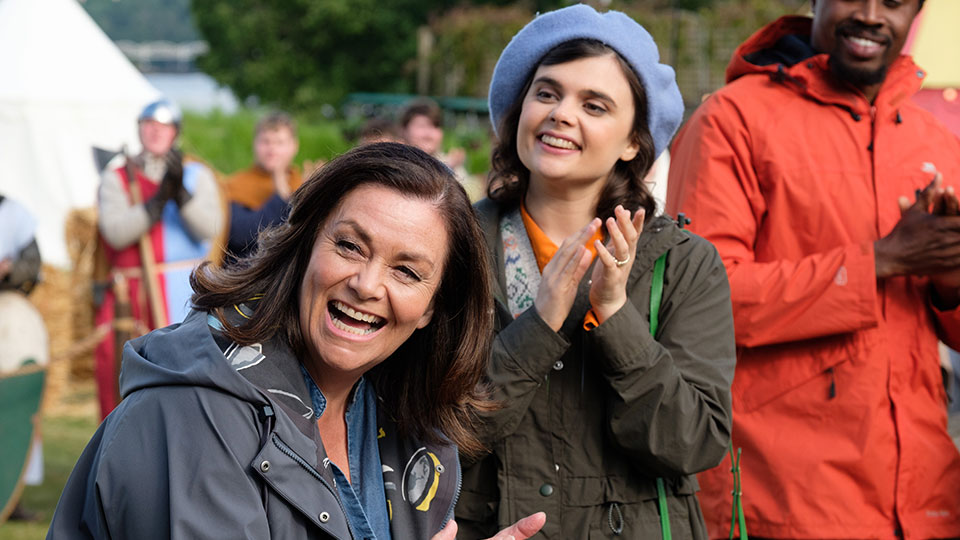 Maggie (Dawn French) found out something shocking and completed her list of apologies on the final episode of The Trouble With Maggie Cole.

Peter (Mark Heap) woke up to his phone going off and an empty bed as Maggie had stayed over at Becka (Gwyneth Keyworth) and Jamie’s (Phil Dunster). Answering the phone, Peter discovered it was Maggie who wanted to apologise for taking time out. Peter said he should be the one who apologised but Maggie explained that she appreciated he had tried to protect her by keeping Jamie’s secret.

Asking when Maggie would be home, the call was side-tracked when she burned herself on her cup of coffee, and she cut him off when he tried to tell her about Karen (Vicki Pepperdine). Maggie jumped back into the conversation asking Peter to meet her at the town anniversary celebrations. Maggie’s loud voice woke up Becka who received a call from Jamie.

Emil (Tomi May) asked Roxy (Emily Reid) how her babysitting went and she had flashbacks to Alex’s (Arthur McBain) worrying behaviour. We then saw Roxy asking Kelly (Kerry Howard) if she and Neil (Joe Layton) had stolen the money and Kelly admitted they had. Roxy didn’t tell Emil what happened.

Jill (Julie Hesmondhalgh) chatted to Marcus (Patrick Robinson) about what she saw happen with Peter and Karen. Marcus asked if she was confident that she saw what happened and Jill insisted that she would have to tell Maggie. They agreed to go to the town celebrations and talk to Maggie there.

Brian (Lee Boardman) helped the debt collectors check out of the pub but they hung around, taking a table.

Jamie and Peter had a chat over breakfast and they were interrupted by a call from Maggie. She told Jamie she loved him and arranged to meet him at the town celebrations.

Becka and Maggie put their coats on and headed to the celebrations but not before Maggie realised that the coat Becka was wearing was one she’d given her for Christmas two years earlier and it still had the tags on.

Marcus and Jill were stuck in traffic in his car so he told Jill to jump out and he’d meet her there. Jill then asked about his progress on his book and he told her he was writing a romantic novel and accidentally told her he was falling in love.

Alex contemplated leaving Thurlbury but turned his car around and decided to head back to the town. That doesn’t seem like the best idea…

At the town celebrations Becka and Maggie wandered around together looking for Peter and Jamie, while Peter and Jamie searched for them. Peter bumped into Karen who over-enthused over Jamie’s news that he was going to be a father. Jamie left Peter with Karen, who continued to believe there was an affair going on.

Alex stole the parking spot that Marcus was about to pull into. He called Roxy to try and explain what was going on, and Roxy asked him to call the police. Alex admitted that he stole money from his gran and that turning himself in would still leave his family in danger. He told Roxy he was going to confront the debt collectors and ‘do the right thing’. He apologised to a concerned Roxy, hung up the phone and headed out of the car. Roxy asked Emil to look after Josh while she called the police and dashed off to find Alex.

Jill was passing Emil’s shop just as he dropped a pile of books. Emil told Jill he was happy for her after hearing about her relationship with Marcus. After helping him, Jill told Emil it was going to rain and carried on to the celebrations.

Alex arrived at the pub where the debt collectors were waiting for him. He told them that he didn’t have the money and they responded by telling him that he would have to complete some risky jobs for them. As the debt collectors left with Alex they bumped into Liam (Laurie Kynaston) who realised something bad was happening. Alex told his brother that he’d been right about him and asked him to look after their mum. Liam made a run for it and one of the debt collectors ran after him leaving Alex, Brian, Sydney (Hollie Edwin) and the other debt collector in the pub.

Jill found Maggie and struggled to tell her what she’d seen. Maggie kept telling her what a good job she’d done with the procession and tried to apologise. Jill stopped her and admitted she had something to tell her.

Back at the pub, Liam returned to the pub with a gun in his hands – Brian’s gun. He pointed it at the debt collectors and told them he wouldn’t let them harm his brother. A fight broke out and Liam accidentally fire the gun, wounding Brian. The debt collectors ran out of the pub and mugged Marcus, who was just parking, stealing his car keys and his car.

As they raced off in Marcus’ car, the rain started to pour and Jill told Maggie about Peter. Maggie refused to listen and stormed off. As Jill followed her she was hit by Marcus’ car so it wasn’t a child as we initially suspected.

Carol (Chetna Pandya) rushed over to Jill while Peter comforted Maggie who believed it was all her fault. Kelly and Neil arrived seconds later looking for their son and Roxy assured them he was fine. The police turned up and asked the debt collectors to get out of the car. When they spotted the gun, a fight broke out and Marcus saw Jill on the ground.

Sydney stayed by Brian’s side at the pub and also tried to talk Liam down. The police tried to help Brian and Sydney lied about the debt collectors trying to rob them. She concocted a story that didn’t implicate Liam.

The debt collectors were arrested and Maggie tried to get in the ambulance with Jill. Marcus told her she wasn’t going and he took her place. Carol gave Maggie a withering look and walked off as Maggie continued to blame herself. Maggie then told Peter what Jill had told her about seeing him kissing Karen.

Peter bumbled his way through what had happened and assured he was going to come clean when he found the right moment. He asked Maggie if she believed him and she said she did. Jamie and Becka agreed. Peter then revealed that Karen sold the story to the newspaper to drive a wedge between him and Maggie.

As they chatted Karen walked past and Maggie made a beeline for her. Maggie put her hand on Karen and shoved her against a post. She confronted her, said her piece and walked off telling Peter he needed a new secretary.

Brian was wheeled into an ambulance and told Sydney that he couldn’t go to hospital for fear of his identity being revealed. Alex emerged from the pub with Liam and spoke to Roxy, telling her that everything was going to be OK. He also made it clear there were no hard feelings towards Neil and Kelly, who looked very relieved.

Maggie and Peter went to the Keep and talked about the wait for news about Jill. They enjoyed the view and kissed but were interrupted by a call from Marcus. Maggie told him that they were on their way to the hospital.

Brian survived his gun-shot wound and Sydney helped him into his hospital bed. A nurse asked if they were related and Sydney said she was his wife. Worried about having to give the police a statement, Sydney teared up as she realised Brian was going to have to do a runner. She kissed him on the cheek and left the room, closing the door so he could run.

Peter drove Maggie to the hospital. As they entered, they bumped into Sydney who told them that Brian had gone. She took Maggie to one side and explained what happened. Peter tried to find out what was going on but gave up and went to the vending machine. He saw Jez (John Macmillan), the radio journalist that spoke to Maggie and put her interview on the radio. As Jez boasted about what he’d done, Peter took Jez’s phone off him, dunked it in a cup of coffee and revealed he was Maggie’s husband.

Returning to Maggie, who look distressed, Peter took her to Jill’s room. Marcus tried to stop Maggie from going in but eventually backed down. As Maggie spoke to Jill, Peter offered Marcus a sweet outside. Maggie then apologised to Jill again, who was sedated, and realised that she’d set off the entire chain of events that had happened in the town. She took Jill’s hand and kissed it, as she began to get emotional.

A nurse entered the room and told Jill she needed to take her pills. It was revealed that Jill heard the whole thing and hadn’t been sedated at all. Jill told Maggie that she forgave her and explained that she would never have fallen in love with Marcus had it not been for Maggie’s radio interview. Marcus heard and he went to kiss Jill as Maggie mooned over them. They asked her to leave the room so they could have privacy.

Maggie told Peter that Jill had forgiven her and she felt like things were going to be OK. Before leaving the hospital, Maggie realised she hadn’t apologised to Marcus so she dashed into the room again interrupting a private moment he was sharing with Jill.

Before leaving the hospital, Maggie asked Peter if she could kiss him and they embraced in the hospital corridor. Peter asked if they could go home and Maggie insisted they went to the beach with Jamie and Becka. As they walked along the beach Becka asked Peter if Karen was a good kisser and Peter said she was awful. Maggie started gossiping about another teacher and the family pulled her up on her loose lips, once again.

Read our full The Trouble With Maggie Cole episode 1 recap

Read our full The Trouble With Maggie Cole episode 2 recap

Read our full The Trouble With Maggie Cole episode 3 recap

Read our full The Trouble With Maggie Cole episode 4 recap

Read our full The Trouble With Maggie Cole episode 5 recap

The Trouble With Maggie Cole is available to watch on the ITV Hub now.

In this article:Dawn French, ITV, The Trouble With Maggie Cole