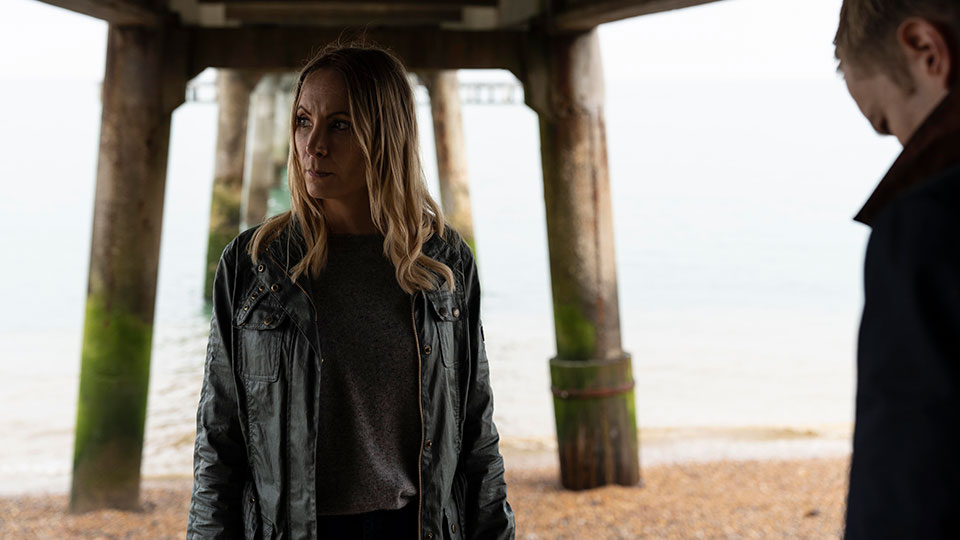 Laura (Joanne Froggatt) continued to try and clear her name as a new suspect emerged on the latest episode of Liar.

The episode opened with Andrew (Ioan Gruffudd) running through the woods and stumbling onto the ground. He hid behind a tree trunk and it looked like he was being chased but it turned out it was just a dog walker passing through. Andrew found somewhere to take shelter but realised he’d been caught on a security camera.

In the present day Laura was being interrogated by Karen (Katherine Kelly) who told her that they’d found the shipping container thanks to her car’s sat nav. Karen then presented Laura’s necklace, which had Andrew’s blood on it. Laura pleaded innocence and claimed someone had taken the necklace from her flat. She also insisted she’d never been to any shipping container.

Laura appealed to Rory (Danny Webb) who couldn’t bring himself to look at her. Karen continued to push Laura telling her she was being charged for murder and would be held until the bail hearing. Laura’s lawyer advised her to say nothing.

Back to Andrew, we saw him searching for something and then sleeping among some rocks on the beach. He was disturbed by a group of people so he moved away.

Laura was transferred to prison in handcuffs and then we saw her bail hearing. Her lawyer pleaded that Laura had a clean record and asked for bail. The court agreed but asked her to hand over her passport and stay within a 30-mile radius. Karen told Laura she’s see her soon as she left the court room.

Liam (Richie Sutcliffe) was waiting for Laura outside the court room and Laura asked for a second as tried to hold herself together and process what was happening. Once she’d taken a minute, Laura refused a lift from Liam telling him that she needed to go and see Vanessa (Shelley Conn). Liam told her it was a bad idea but she did it anyway.

Moving backwards two weeks Luke (Jamie Flatters) came out of his coma and asked about his father. He was told that Andrew was still missing. Andrew, meanwhile was seen outside the shipping container where Laura’s necklace had been found and he entered it finding it had electricity. Andrew called Ollie (Sam Spruell) and asked for his help in faking his death. When Ollie refused, Andrew revealed that had the recording of Ollie raping a man that he would use against him. Reluctantly Ollie asked what Andrew needed him to do.

Vanessa visited the police station and asked a colleague if she could borrow their pass because she needed the toilet. She got the pass and made her way to the office where she called the department that had Laura’s car. Vanessa told Laura that no one had accessed the car and Laura turned her suspicions to Rory and Karen. Rory was the first person to look at the sat nav and Laura became convinced that he had hacked it.

She waited for Rory outside the station and found him on the phone. She asked Rory if he’d hacked her sat nav and he refused to speak with her. As he arrived at the station, he was met by Karen and told that the blood spatter was inconsistent. She told him that the report would be on his desk soon and then revealed that they found no prints on the sat nav and it had been wiped clean. Is Rory trying to help Laura?

Laura met with Winnie (Amy Nuttall) for support who told her that she’d never backed down before, encouraging her to fight. She used that advice to go to the restaurant Rory had booked a meal in that evening and she confronted him. Rory threatened to arrest her and instructed her to go home. They had a physical altercation as Laura pretended to be drunk and she lifted his phone. Before leaving the restaurant, she guessed his passcode and gained access.

At home Laura searched through Rory’s phone and found an email from Rory’s son Greg (Jack Colgrave Hirst) about a toxicology report titled ‘How much is Laura Neilson’s freedom worth?’

Liam met with Katy (Zoë Tapper) at the park and updated her on the situation with Laura. They talked about Andrew’s car key and Katy recalled that she’d found one like it at the hospital, which she turned into lost property. Liam asked Katy to go back to the hospital to see if it was still there and he offered to go with her to help Laura.

Laura was taking a nap when a message came up from Greg on Rory’s phone arranging a meeting. She met with Greg and confronted him about the email, which he had forwarded to his dad about his own overdose. Laura accused Rory of covering up for Greg to save his job and Greg refused to back down. She urged him to do the right thing and he told her to ‘piss off’ before walking away.

Katy and Liam went to the hospital and Katy asked the receptionist about the car key. It was claimed by someone using a fake name so Katy asked security for access to the CCTV footage. The security guard said he couldn’t give her access but Katy reminded him that he owed her for setting him up on a date. That was enough to convince him and as the security guard looked through the footage, Katy and Liam had a moment. On the footage they saw Ollie collecting the car key.

At his hotel Ollie saw the cover of the newspaper and found out Laura had been arrested for Andrew’s murder. He then went to his room and called Luke saying they needed to meet to talk about his late mother.

Laura went back to the police station and asked to see Rory to give him something. Meanwhile, Katy and Liam went to see Carl (Howard Charles) to ask him if he recognised Ollie in the CCTV footage. Carl was reluctant to help but eventually told them he had seen Ollie and pointed them in the direction of the hotel he thought was staying at.

At the police station Laura gave Rory his phone back and told him that she knew what he’d done for his son. Karen got a phone call and was told that Anthony, her ex, was released from prison.

Laura walked Rory through the information she’d found on his phone and accused Rory again of framing her. Rory tried to dismiss her but Laura pressed on as he pleaded with her not to destroy his son’s life. Laura asked who sent the email to Greg and Rory told her that if Greg’s medical records got out, it would cause chaos for the cases he’d closed.

Katy and Liam’s next stop was the hotel Ollie was staying at. The receptionist asked for a name and when they couldn’t give her one, she refused to help them. Katy insisted on staying outside the hotel to wait for Ollie to leave. Liam pointed out that they’d been assuming that the same person that framed Laura was the person who murdered Andrew.

Karen was taken into an interrogation room by a detective who wanted to talk to her about the release of her ex. He told Karen that Anthony beat up his latest girlfriend so bad that she died in hospital. Shocked by the pictures she saw, Karen was asked if she had any idea where Anthony might be. She said that she hadn’t heard from him but suggested that Anthony’s cousin Dan Walker might be the best place to start looking for him. Once the detective left, Karen saw she had an incoming call from Laura and she declined it.

At home Laura was trying to get through to someone at the police station to tell what she knew about Rory. She was fobbed off and after hanging up the phone, she contemplated contacting Ian (Kieran Bew).

Still waiting for Ollie, Katy and Liam had a frank conversation. She apologised to Liam for making a mistake and Liam reminded her that he was only there for Laura. Katy admitted that she wasn’t happy and she felt plain, which is why she cheated on him. She was keen to point out she wasn’t making an excuse, just explaining her side. Liam responded by telling her that he had been filled with doubt after giving up his job to look after the kids. Katy tried to kiss him but he refused, and they were interrupted by Ollie driving off in his car. They tried to follow him but a car stopped them from getting out of the car park allowing Ollie to get away.

After that mishap, they went to see Laura to tell her that they’d tracked down the man Andrew had been with before his death. They showed her the photo and Laura suggested that maybe he had something to hide, which is why he was framing her.

Jumping back a week, we saw Ollie helping Andrew in the shipping container. He was drawing his blood and made it clear he needed to stop helping him. Andrew reminded him that he was in control of the situation and refused to give him the recording.

Luke was in therapy and admitted that he wanted to kill himself and that his actions weren’t a cry for help. He was asked if he still felt that way and he said the situation had become too much for him. The therapist asked Luke how he would feel if his dad got in touch and Luke told her that he would kill his father if he saw him.