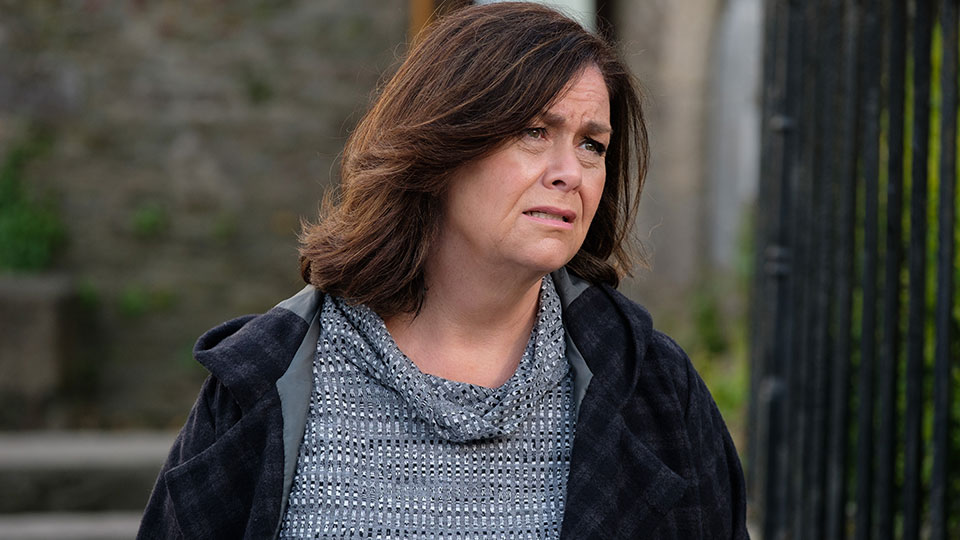 Maggie (Dawn French) continued to make amends but her own family secrets caught up with her on tonight’s episode of The Trouble With Maggie Cole.

We didn’t get to see much more of the incident this week but we did see that Jamie (Phil Dunster) and Becka (Gwyneth Keyworth) were present and the police rushed to the scene.

Resuming the story after the opening credits, Maggie blasted out Culture Club to the annoyance of Peter (Mark Heap) early in the morning. Maggie was working on writing letters to people to tell them about Jamie and Becka’s baby news. Peter pointed out she was writing to people she doesn’t even speak to but Maggie ignored him.

Maggie asked Peter for a stamp and when he said he didn’t have any, she sighed about being ostracised from the local shop and having to go out of her way just to get some stamps. Peter tried to refocus her and Maggie assured him she wasn’t going to attend the town anniversary planning meeting.

Emil (Tomi May) had an uncomfortable encounter with a customer who was prying about Roxy (Emily Reid).

Sydney (Hollie Edwin) and Liam (Laurie Kynaston) talked about finding Brian’s (Lee Boardman) gun. As Sydney got out of the car to go to work, they spotted the two men we’d seen accosting Alex (Arthur McBain) during last week’s episode.

When Peter arrived to school, Karen (Vicki Pepperdine) was a bit frosty and complained about flowers that had arrived from Marcus (Patrick Robinson) for Jill (Julie Hesmondhalgh). Karen told him a journalist had called for him and he went into his office, looking worried.

Maggie arrived at Emil’s shop and bumped into Jamie and Becka. She asked them to get her some stamps but Becka refused, trying to encourage Maggie to make amends with Emil. Maggie took the advice and waited nervously as Emil served a customer. When the customer left, Maggie approached Emil sheepishly and asked for a book of stamps and enquired about Roxy.

Maggie tried to explain herself to Emil and he sounded off to another customer. He accused her of being racist and when she tried to get the customer to back her up, Maggie dug an even deeper hole. Emil refused to sell her any stamps and as she left the shop, Maggie saw the poster for the town anniversary planning meeting.

At the school Jill received a call from Marcus and she went to see Karen to pick up her flowers. Karen remained stony-faced as Jill carried on her conversation and Marcus asked her out for dinner. Jill told him she had the planning meeting and invited him to attend and support her. As Marcus hung up, he received another call and reacted angrily to a ‘journalist’ that asked him questions about Maggie.

Working at the shop, Maggie watched the clock until it hit 1pm so she could call Peter. She offloaded about her experience with Emil and complained that Emil now thinks she’s racist. Peter tried to reassure her that they would be able to sort things and promised her they could talk about it later. When he hung up he looked at an old news article on his computer and dropped his hand into his hands.

Roxy returned home and Emily told her about his run in with Maggie. Alex meanwhile, tried to convince Liam to do some work and they had a frank exchange about Alex not having spoken to Roxy since the news article came out. Liam then prodded about Alex’s sobriety hinting that he knew his brother had been lying.

Neil (Joe Layton) bumped into Alex as he arrived at work and they talked about Neil’s ‘lottery win’. We then saw a flashback to Alex pleading with the men that had come to debt collect that he could pull the money together in 24 hours. We then saw Alex get a video message from them featuring footage of his family.

Maggie received an unexpected visit from Roxy and she made a pot of tea so they could have a chat. Apologising and claiming her interview was ‘out of context’, Maggie explained that she was tipsy. Roxy told Maggie that what had been said on the radio is something she lived with day in, day out. She asked Maggie if she believed the rumours and Maggie said she wasn’t sure. Roxy revealed that she’d only had two boyfriends. Maggie broached the subject of Roxy being Polish and was keen to point out that she wasn’t racist.

Brian told Sydney that the two men who were claiming to be developers were staying another night. She was suspicious about them and answered the phone to find the journalist that’s been calling everyone on the other end of it.

During class Jill whispered to a student while Peter was reading a story. He reacted by scalding her in front of everyone.

Roxy and Maggie continued chatting and the conversation turned to Emil. Maggie said she’d never heard a bad word said about Emil and Roxy revealed that her father voted for Brexit and for the Tories. She then told Maggie that her and Alex used to visit the grounds of the historical site she worked in at night after it was closed to the public.

Maggie told Roxy how bad she felt about what she’d said about Jill and admitted she missed her best friend. She them offered to drop Roxy off at home.

Liam told Sydney that he was planning on asking Brian for a job at the pub. She laughed at him but agreed to let him enquire. Brian didn’t seem too keen but Sydney pushed and he agreed to hire Liam to work in the kitchen at the weekends.

Alex resorted to scratchcards to try and win the money he needed to pay off his debts. He then thought back to the conversation with Neil and realised where his money had gone.

Maggie dropped Roxy off and was convinced to go into the shop to apologise to Emil. Roxy explained that she’d accepted Maggie’s apology and Maggie apologised again. Maggie then ranted about the prices in Emil’s shop and suggested he tried service with a smile. That smoothed things over between them and he sold her the stamps. Roxy got a message from Alex saying he missed he.

Maggie and Peter took a walk on the beach and she told him about making amends with Emil and Roxy. A phone notification reminded Maggie about the town planning meeting and she insisted they were going even though Peter thought they’d agreed not to. Maggie then called Jamie and Becka to tell them she wanted them to go too.

Peter then spoke privately to Jamie and told him that they should go to the meeting. Jamie and Becka agreed to meet them there.

Maggie spent time getting ready for the meeting and Peter was confused as to why she was making so much effort when they were supposed to be keeping a lower profile. She explained that now she’s been making amends, she felt things were looking up.

Marcus and Jill had an awkward hello where he tried to kiss her and she accidentally dodged. Jill assured Marcus that Maggie wasn’t coming and they talked about being contacted by the same journalist trying to dig dirt on her.

Roxy spoke to Alex on the phone and she quizzed him about the way he’d been behaving. They arranged to get together for a pizza and a film, and it was revealed Alex was outside of Neil’s home.

Jill started the meeting and everyone in the audience got a notification on their phone. As Jill lost control of the crowd, Maggie and Peter arrived for the meeting. Before they went in Peter received a call from Karen and he didn’t answer it.

Getting everyone’s attention, Jill then realised a story had broken about Maggie. The headline referred to Maggie’s family secret and featured a picture of her with Jamie along with a story talking about his violent past. As Maggie entered the room, everyone fell silent and she saw the story up on the projector. Maggie claimed the story wasn’t true and when she asked Peter to support her, he suggested they leave.

As they were on the way out, Jamie and Becka arrived. Maggie asked Jamie if it was true and she didn’t get an answer as Peter walked away.

Advertisement. Scroll to continue reading.
In this article:Dawn French, ITV, The Trouble With Maggie Cole