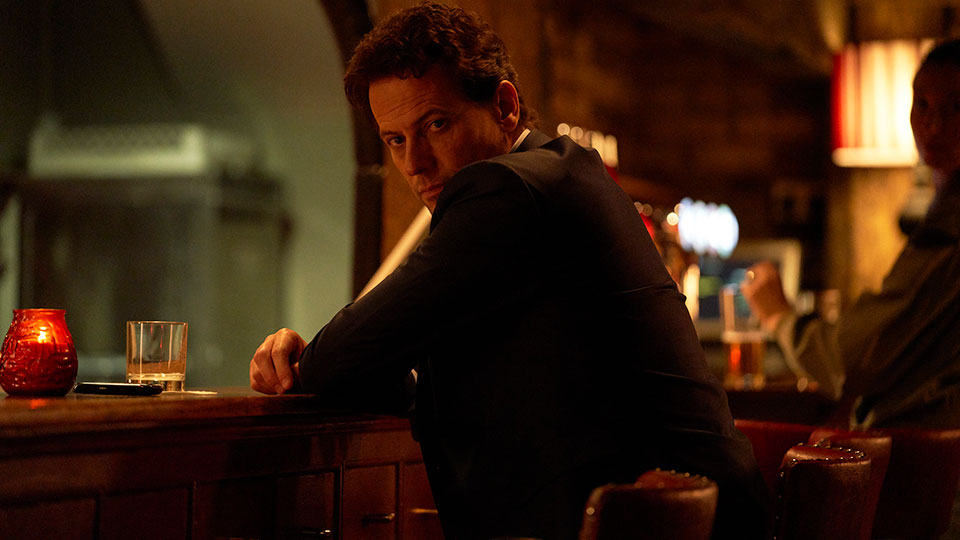 The pasts of Laura (Joanne Froggatt) and Andrew (Ioan Gruffudd) were explored on the latest episode of Liar.

Karen (Katherine Kelly) and Rory’s (Danny Webb) grim discovery was revealed at the start of tonight’s episode. They found a sleeping bag on the floor of a shipping container and blood sprayed across the wall and floor.

The episode then jumped back to Laura and Andrew’s first date, which seemed to be going swimmingly. Andrew played the vulnerable still hurting widow and we got to see what his relationship was really like with his late wife Mary (Shauna MacDonald) when the action jumped eight years back in time.

We saw Andrew standing outside of her window and visiting a prostitute. He told her to lie down and not talk, then climbed on her and started gently slapping her face. Creepy. At home the next day with his wife, Andrew lied about his whereabouts before heading out to work.

As he arrived into work, Andrew saw colleague Dylan stressing over trying to cancel his bank cards. Sitting down to speak with him, Andrew found out Dylan had been robbed after a one-night stand. Dylan then recalled the evening and suggested that he had been raped. Andrew asked if his drink had been spiked and offered to run a drug test but he refused.

Andrew offered to confront the man Dylan had spent the night with and after work he went to see him. It turned out that the man Dylan went home with was Ollie (Sam Spruell) and Andrew asked if he’d spiked Dylan’s drink. Ollie gave Andrew Dylan’s jacket but refused to confirm whether or not he’d drugged him.

Following that encounter, Andrew went to the bar where Catherine (Dawn Steele) worked and he received a call from his wife. He chose to ignore the call and kept knocking back drinks. As he got drunk, he talked to Catherine and brought up the time that she refused his advances making it clear he was still interested in her before rambling about marriage.

Back in the present day Katy (Zoë Tapper) called Liam (Richie Campbell) to tell him the police had more evidence against Laura. Liam asked Katy if it was possible that she could have committed the murder and reminded her about an incident that took place between Laura and her dad Henry.

We saw Laura clashing with her dad while she lived with him. He tried to encourage her to get a job and move out, but Laura got a bit testy. She went to sit outside and drink her cuppa when she heard the smoke alarm going off. Heading into the house to investigate, she found her dad having a seizure and called an ambulance.

At the hospital Laura and Katy sat by their father’s bedside and it was revealed that he had a brain tumour. Back home he and Laura had a consultation with a doctor via a video call, who told them that operating on the tumour wasn’t possible. Laura pushed to get him help and the doctor offered a treatment path that had no guarantee but would require him to go to Stockholm.

After the call, Laura’s dad shared his concerns about the expense and she convinced him to go ahead with it. The day they were supposed to go to Stockholm, Henry went missing and wouldn’t answer his phone. Laura went looking for him and found him sat on a bench on the beach. The two had a chat and Laura tried to reassure him that things would be fine. Henry admitted that he wasn’t scared and that he was done fighting. Laura begged Henry to have the treatment for her and Katy but he told her it was his time.

Henry gave Laura a necklace that had been passed down the family. He told her he believed it had brought him luck and went on to talk to Laura about palliative care. Henry asked that Laura had to help him go quietly if his health went downhill and shared his wish not to be kept alive by a ventilator.

Jumping back to Andrew, we saw him watching Ollie who was finishing up another date. He went back to his home and did a web search for information on Ollie, finding lots of photos of him. The next morning he waited across the road from Ollie’s flat and broke into it once Ollie had left for work. Andrew hid cameras around the flat and left.

Later that day he watched the camera feeds on his laptop and caught Ollie returning home with the man he’d stopped him with the night before. He caught Ollie drugging the drink of his date, and watched as the evening unfolded and Ollie assaulted his passed-out victim. Andrew then returned to the prostitute he’d been seeing.

Andrew paid Ollie a visit and revealed he’d been watching him. Ollie goaded Andrew, saying he was interested in what he saw, which is why he hadn’t gone to the police. Andrew admitted he’d thought about drugging women and Ollie offered to show him how to do it and get away with it. Ollie said if Andrew got rid of the recording, he would give him a vial of GHB.

Andrew tried to walk away but Ollie kept pushing, and Andrew took the vial from him. Realising the implication of what he’d done, Andrew struggled to concentrate at home or at work. He thought about deleting the video of Ollie before going back to Catherine’s bar. She was frosty with him and he apologised for his behaviour, insisting on buying her a drink. Catherine agreed and Andrew readied the vial.

Switching back to Laura, she and Katy were talking about Laura’s date with Tom when they were interrupted by a phone call from the hospital. Henry’s health had taken a turn for the worse and the doctor explained that he might never wake up again. Laura asked how long Henry had left and the doctor said she couldn’t give a precise answer, guessing it could be months or years.

Laura and Katy argued about the best way to handle Henry’s situation. She pushed for an end to their father’s suffering and eventually Katy said she would help. At home Katy went into Henry’s room after telling Laura it wouldn’t take long to end his life. Laura waited outside and Katy returned in tears saying she couldn’t do it. Laura then went into the room and did what her sister couldn’t.

Back in the present day, Laura was arrested again for Andrew’s murder. Rory told her they’d ‘found it’ and Laura had no idea what they were talking about. We then saw the necklace that Henry had given to Laura was found in the shipping container.

Advertisement. Scroll to continue reading.
In this article:ITV, Liar