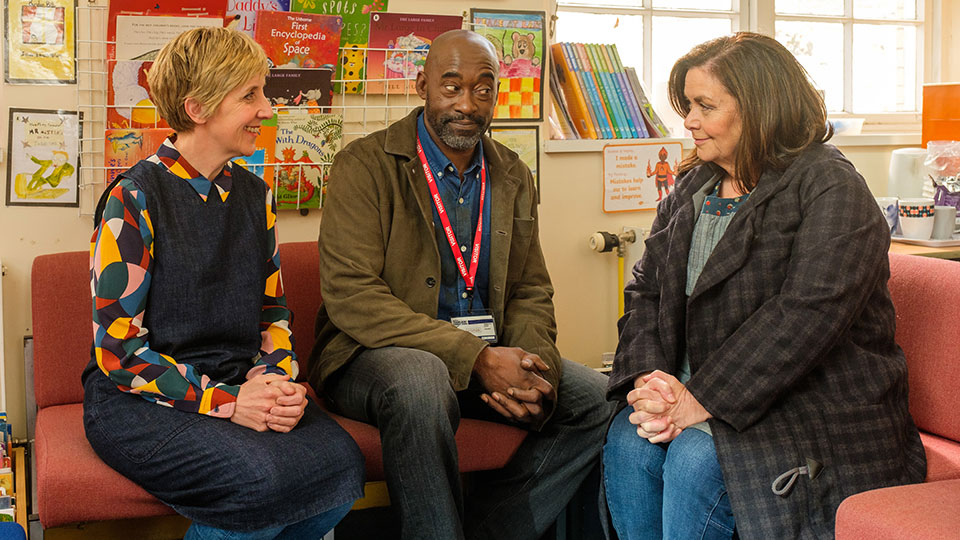 Maggie (Dawn French) continued to make amends but was blissfully unaware of a secret within her own family in tonight’s episode of The Trouble With Maggie Cole.

Kelly (Kerry Howard) witnessed the child get hit during the town celebrations and we saw another car with a ‘Save the Bees’ sticker, that looked to be the one that hit the child. As that revelation was shown, we heard what sounded like a gun shot in the pub.

The action then jumped back to continue revealing the fall out of Maggie’s loose lips. Karen (Vicki Pepperdine) was showing Peter (Mark Heap) a petition calling for his resignation when they were interrupted by Jill (Julie Hesmondhalgh) who announced that Marcus (Patrick Robinson) was coming into the school to talk about creative writing.

Maggie waited outside school to pick up Peter and saw Roxy (Emily Reid). When she tried to get out the car to speak to her, Peter asked her not to. He told Maggie he’d had a bad day but didn’t elaborate. Before they left Kelly pulled up to pick up her son and had a brief chat with Roxy about their status as part of the ‘outed six’.

Following their departure from the school, Maggie and Peter had a bit of an argument about which one of them was going to go into the store to buy the things they needed. They realised Emil (Tomi May) was watching and Peter said he’d just go without veg. Maggie announced that they were going to Sainsburys to stock up on food.

Neil (Joe Layton) arrived home unexpectedly early and told Kelly that he’d quit his job. Kelly was less than delighted to hear that information and Neil pleaded with her to meet him half way.

Maggie and Peter returned home following the shopping and Maggie told her husband she’d received an odd phone call. She revealed that The Daily Mirror had called her and she assured him it was all fine. When Peter asked if it really was The Daily Mirror, Maggie said that she wasn’t actually sure and assured him she didn’t say anything she shouldn’t have.

At the pub Alex (Arthur McBain) arrived to find his brother Liam (Laurie Kynaston) drinking alone at the bar. They had a chat about their mother and Sydney (Hollie Edwin) joined them to tell Liam that he did have to pay for his drinks. Brian (Lee Boardman) watched their conversation and Liam noticed him at the end.

That night Peter started texting Jamie (Phil Dunster) but didn’t actually send the message. What is he hiding?

The next morning Peter warned Maggie about going to her regular hair appointment, suggesting that Kelly probably wouldn’t be there given she’d recently won the lottery. Maggie asked Peter if he was OK and he said he was, still not telling her anything.

The strain on Kelly and Neil was showing as Kelly had spent the night on the sofa. She told him that she couldn’t deal with the lies and he started to reminisce about when they first got together.

Alex woked up Liam and scalded him for having a bong visible next to his bed. As he tried to find somewhere to put it, Alex found more drugs in Liam’s bedside cabinet. He told his brother to think about their mum and Liam got nasty alluding to Alex’s gambling problems.

Jamie was told by Becka (Gwyneth Keyworth) that they were expecting a baby. He was delighted and the couple finally had a little joy to celebrate. Becka told him the bad news was that having a child meant Maggie would become unbearable.

At work Peter did an Internet search for information on Jamie while Karen lectured Marcus on smoking, even though he kept protesting that he didn’t even smoke. She gave him a lanyard and ID badge and instructed him to keep it visible at all times. Karen also told off Jill for bringing a visitor to the school at such short notice. Jill tried to introduce Marcus to Peter but Karen blocked them.

After they left, Karen informed Peter that Marcus was here and she complained about the content of the author’s books. Karen then couldn’t stop stirring the pot by accusing Jill of blackmailing Peter and she offered her ear (and more) if he needed it.

Maggie went through with her appointment at Kelly’s salon. Kelly had forgotten she was coming in and wasn’t best pleased to see her.

Jill introduced Marcus to her students and was surprised when one of the kids read out a violent story about Batman. Roxy selected Kelly and Neil’s son to read out his story next, and it was about a prince exploring a magic fortress. We then saw how Neil and Kelly got their money as their son had discovered it at the castle during a day playing out. Kelly told Neil to call the police but he thought they should keep it.

At the salon Maggie apologised to Kelly for listening to gossip and telling their personal business to the radio journalist. Kelly told her to forget it and Maggie suggested it was probably good that their secret was out now. As Kelly brushed Maggie’s hair, Maggie kept talking and Kelly burst into tears.

Maggie tried to console her and Kelly told her she didn’t care that she’d gossiped. Rather than leave her alone, Maggie continued to press Kelly who admitted she wasn’t happy in her marriage. Neil’s dig earlier in the episode about their crappy honeymoon had upset Kelly as she’d booked their anniversary in the same place.

Listening to Kelly, Maggie tried to reassure her and shared some comforting words. That calmed Kelly down and the two women bonded a little over their marriage woes. Maggie’s phone rang and it was Jamie calling to tell her the news that Becka was pregnant. She asked them not to tell Peter because she wanted to and she left the salon after arranging another appointment for the following day.

Brian took a beer delivery at the pub and while he was doing that, Sydney went snooping in his flat. She found the same box that Liam had containing the gun.

Maggie rushed into Peter’s office, swiping Karen out of the way and nearly knocking a tray of tea and biscuits out of her hands. She told him the news about Jamie and Becka, and Peter told a disappointed Karen.

Jill and Marcus had bonded over the course of the day and just as he was about to ask her something, Maggie interrupted them and Marcus spilt tea down himself. Maggie was on the hunt for Roxy and tried to apologise to Marcus but he said he didn’t have time to talk to her at that moment.

Before Marcus left, he asked Jill out for a drink and she accepted. Maggie stood awkwardly in between them and when she tried to talk to Jill about Marcus, Jill became cold. In an attempt to build a bridge with Jill, she was going to reveal Jamie and Becka’s news but stopped when she saw Jill had taken over the organising of the town event. Maggie did eventually deliver the news but it didn’t warm Jill to her.

Kelly and Neil had another heart-to-heart about the marriage. It looks like for now the couple is going to survive but Kelly told Neil that they had to do something with the money as they couldn’t trust themselves. Neil suggested that he was going to burn the money but before he did, they took some money for themselves.

Alex returned from work and there were two men waiting for him, who had tracked him down after seeing him in the paper. He told them he had their money and they asked for £20,000 not the original £12,000 he owed them. The men told Alex he had until 11pm to get the money to them and made it clear that they knew his name and where his family lived.

Over dinner, Maggie talked purely about the town event and Jill giving her the cold shoulder. Becka interrupted and refocused the conversation on the baby. As she revealed the names they were considering, Maggie talked through gritted teeth, but Becka admitted she was joking.

Maggie then mentioned about her mysterious call and Jamie and Peter looked nervous. It was clear that Maggie was oblivious to a family secret and as she rambled on, Peter declared a toast to Jamie and Becka.

Before they left, Jamie spoke to Peter and Peter assured him that not all secrets were bad, reminding him that what happened was a long time ago. The father and son embraced before Peter and Maggie left.

Jill and Marcus’ date went well and they kissed after, promising to speak the next day.

It was then revealed that the money that Kelly and Neil had stolen, and were in the process of burning, had belonged to Alex, who was frantic when he realised it was gone. As the episode ended, it was revealed that it was Marcus’ car that hit the child.

Read our full The Trouble With Maggie Cole episode 1 recap

Read our full The Trouble With Maggie Cole episode 2 recap

Advertisement. Scroll to continue reading.
In this article:ITV, The Trouble With Maggie Cole